What kind of freestanding lamps can I use for > 6000 lumen up-light? [closed]

I'm renting an apartment whose living room I need to light up. I currently has one lamp hanging from the ceiling, for a 4.5m x 7.5m room, and that's ridiculously insufficient (even after using an E27 splitter and two 36W CFLs for a total of estimated 4320 lumens).

My landlord is not willing to invest in/commit to ceiling- or wall-mounted lighting fixtures and the drilling and wiring they would require, so we settled on getting several freestanding lamps. Mostly they'll have to be on the floor, with one possibly on top of a sort-of-a closet.

Now, I'm a lots-of-light kind of person; but I don't want it to be in my face; I want to shine the light on the ceiling and the walls and have it reflect. I think I can use about 4 or 5 lamps overall (plus the ceiling lamp), to minimize the, shall we say, aesthetic/spatial damage (i.e. place them at various corners); and I'm thinking something like 30,000 lumens (500W of CFL power draw) should be enough (not "500W equivalent"; remember it's being covered by a shade an reflected off the ceiling). This is just a guesstimate; and I can't say anything in terms of lumens since I have no idea how much is X lumens nor how many lumens my current bulbs produce. Also, I don't mind it being LED lights instead of CFLs as long as I get my wattage.

Thus I need lamps which:

I'm having trouble figuring out which kinds lamps would fit my bill - so I can know what I'm looking for. I've been looking at Torcheres, but almost all of them fail to meet criteria 2 and 4 and most don't even meet 6 (unless you use a flat/small bulb). Here's a typical invalid one: 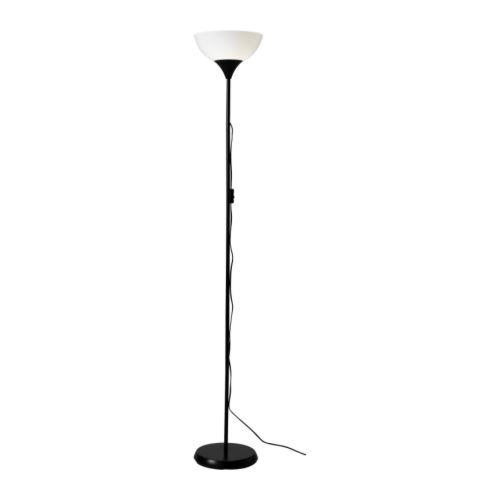 There are task floor lamps; they often have opaque shades, but the shades are usually too narrow and sometimes not long enough. I'm also not sure how well they'll handle the larger wattage. Here's an example: 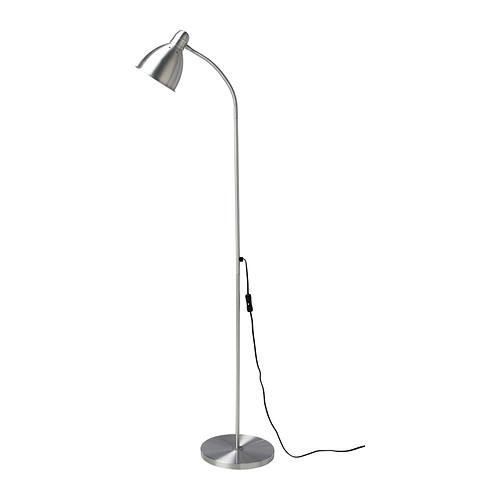 Finally, for the on-the-closet lamp, I thought maybe one of those floor flood lights; these seem to come with the right wattages, but they seem designed for outdoor use, and I wouldn't want them to stand out so much.

So, any suggestions/ideas about the kinds of lamps I should be looking for are very welcome.

You'd need sunglasses, if not welding goggles, to be in a room with 500W of LED lighting.

I like the Torchiere ("floor lamp") solution the best. There are dozens of available styles, colors, and prices. The ones in my living room have translucent plastic shades and reading lamps (also with translucent shades), handle two 150w bulbs each (plus a 60W bulb for the reading lamp). It's plenty bright with three of these fixtures with 10w (!) dimmable LED lamps installed, and you'd have to be about 6' 5" to see over the top of the shades.

I find that Translucent shades give better coverage and eliminate more shadows than opaque shades (where all the light is coming from the ceiling).

Not the answer you're looking for? Browse other questions tagged lighting light-fixture bulb lamp cfl or ask your own question.

3
new mini CFLs don't seem to fit/work in fixtures?
3
Why does the breaker trip occasionally after I installed a new light fixture?
11
What exactly is a PAR type LED lamp, how does it differ from R/BR type LED & CFL lamps?
3
Cost-effective way to have good lighting for color-blind users
5
Multiple weak light bulbs vs one strong light bulb
0
Will many weak bulbs be more luminous than one bright one?
1
Will an LED light bulb illuminate down on this uplight lamp?
0
What height are lumens measured at when calculating lighting layout?
1
Hue (led) bulb does't turn on when put in certain lamps?
1
What height/ distance from ceiling or above surfaces would be good for uplighting/ scone wall lamp?