How can I trip a breaker from the outlet

One time at my job we had some electrical work that needed done. The electrician had a small homemade switch box with a 120v mains plug running out of it and a switch on the front. The device basically threw whatever breaker that plug was attached to so he new which one needed work on and made the circuit safe. Where can I get one of those boxes, or a way I can trip the breaker from the outlet?

The answer which states that this is a bad idea is correct.

To answer your actual question: you could build such a device in about five minutes. Take an extension cord, cut it in half, attach the white and black wires to an ordinary light switch, and wrap the whole thing in a handy box.

When plugged in and the switch is closed, a short circuit is created that will either trip the breaker if it is working, or start a fire inside the walls if it is not.

That box should have been a warning that the guy was incompetent; it's a very bad idea. If the breaker malfunctions, it can start a house fire.

There are cheap devices available in most home centers and hardware stores which can put a signal onto the wire and pick that up at the breaker to identify which breaker controls that outlet. There's a better version that a pro should have which can do a few other things.

Or there is the traditional homeowner solution: plug a radio into the outlet, turn up the volume so you can hear it from the basement, and try breakers until you find the one which silences the radio.

That box works by connecting the live and neutral wires of the circuit to each other, i.e. it makes a short-circuit.
If all goes well, the fuse trips/blows. But as @keshlam said, it's a dangerous way to make a breaker trip: you're overloading the circuit. I did this once by accident, and had a 10 cm long flame blast out of the breaker box as the fuse tripped. Not the kind of thing you want to do on a regular basis.

The reason this isn't completely deranged at that industrial location is that certain industrial sites follow slightly more permissive rules owing to having on-site electricians with scheduled, proactive maintenance. You see this phraseology in certain NEC rules. Their work is done to a higher caliber than home wiring; THHN in metal conduit, no backstabs on the premises, frequent inspections, most circuits meggered, etc.

Doing this in a residential location with lax residential rules and work of unknown provenance is suicide.

Obviously the switch is basically dead-shorting the hot and neutral to induce a trip, but if you do that in a residence, you have about a 50/50 chance of inducing future arc faults at a backstab, or at the least, fusing it open. We get lots and lots of "plugged in a (well within legal range) large load and a backstab failed" questions. You also have a chance of other stupidity, like discovering why FPE and Zinsco panels are panela nongrata.

The safe answer to this would be to have an electrician install remote controlled circuit breakers, with a suitable trip circuit installed at the outlet where you want to remotely trip the breaker. (Eaton says they come in a CLR form factor for residential panels.)

Of course, properly labeling the panel, perhaps with a map showing where outlets/lights for each circuit would be a much cheaper and easier solution, and arguably more useful.

Let's assume the guy with the box was not incompetent or insane and that he had actually devised a reasonably safe means to do this. What would it take? Below, I present a design that should work. I want to emphasize that I have not built this or tested it - this is purely theoretical. If you want to try it, do so at your own risk. I understand the fact that commercially available devices are out there that can identify circuits. Nonetheless, I have often wanted something similar to what was requested here, and the interest in this post tells me I am not alone. So here are my thoughts.

First of all, a couple of electronic principles. Ohms law states that Voltage (V) is the product of Current (I) and Resistance (R), V = I x R. A typical home circuit is supposed to be 120V. The standard circuit breaker is rated for 15 Amps. Using Ohms law, we can rearrange the equation as follows: R = V / I. So, 8 = 120 / 15. This means that an 8 Ohm load would draw 15 amps at 120 Volts. Resistance less that 8 Ohms would draw more than 15 Amps, and should trip the breaker.

Now, don't go out and buy an 8 Ohm resistor from radio shack and hook it up just yet. The other factor we need to consider is power dissipation. Power (Watts) is the product of voltage (Volts) and current (Amperes), Watts = Volts x Amperes. So, at full load, a 120 V, 15 Amp circuit provides up to 1800 Watts of power. This means that, with 8 Ohms of resistance and 120 Volts, the box would need to be capable is dissipating 1800 Watts. The resistors you see on circuit boards are typically something like 0.25 Watts. That won't work.

What we need now is a resistive element capable of dissipating the power. A simple method would be to create a box that has multiple screw-based light bulbs, and to get some high wattage bulbs, and have enough of them connected to exceed 1800 Watts. You could add toggle switches for each bulb, and then switch on one at a time until the current draw was too high and the breaker tripped. The advantage here is that you would be dealing with components normally designed to be powered by 120V, and all the wiring and switching would be standard stuff. The problem is that such a box would be bulky and it is getting harder to find high wattage bulbs. Plus, light bulbs break.

An alternative would be to use wire-wound power resistors. For about $18 each, you can buy power resistors capable of dissipating 300 Watts each. Power is additive, so if we have at least 6 resistors, we could handle 1800 Watts. That being said, it is not a good idea to run things at their limit. So I would design a circuit with at least 8 such resistors, so it could handle 2400 Watts, a reasonable safety factor. Home voltage is often as high as 125 Volts, and the breaker might allow more than 15 Amps to flow before tripping; 2400 Watts gives a safety factor of 33%, so we should be OK.

So the idea would be to make a box, with a switch for each pathway, that has at least 5 32-Ohm pathways, each capable of dissipating 600 Watts. Switching on the first 4 would draw about 15 Amps from 120 V, switching on the fifth would go over 18 Amps and should trip the breaker. If you wanted to add a sixth, you could also potentially trip a 20 Amp circuit.

Here is a diagram with five pathways.

The resistors would cost you something like $120. The light switches could be standard stuff. You would need to make sure to wire it with wire capable of carrying enough current. Each 32 Ohm pathway would carry 3.75 Amps. Heavy gauge lamp cord would do the trick. 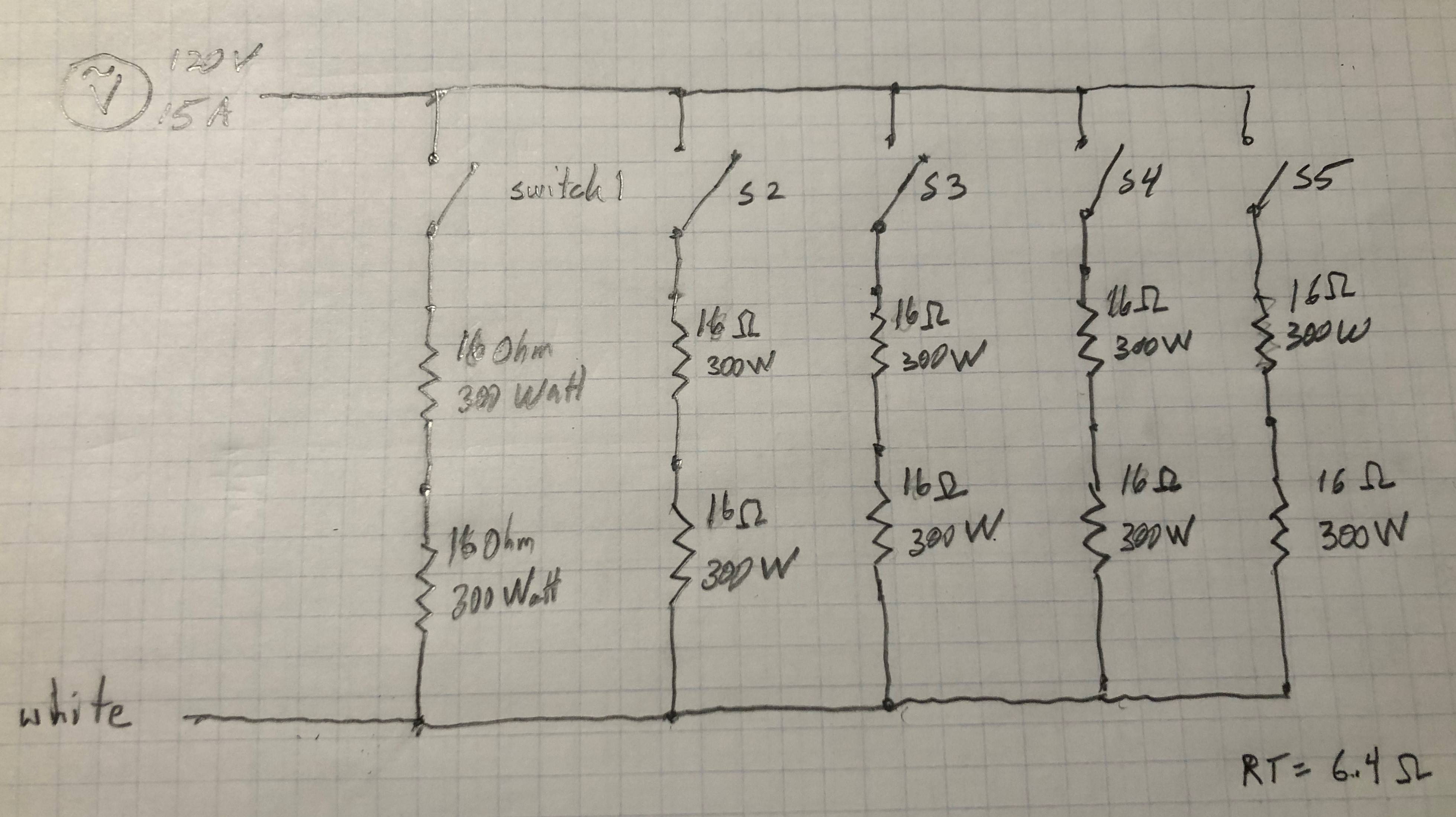 16
Can I run a 15A table saw on a 15A circuit if there are also shop lights on the same circuit?
1
How might one trip a breaker from a GFCI outlet?
0
What could go wrong if you made a circuit-breaker-tripper with its own circuit breaker?

1
Do I want a common trip or independent trip quad breaker?
1
220 outlet burnt caused other outlets to go out breaker didn't trip
9
20 amp circuit breaker failed to trip
4
Is it OK to replace a 15A outlet with 20A outlet as long as it's already on a 20A breaker?
8
Using NEMA 14-50 with 60A breaker
2
Lights flickering, outlets randomly stop working
0
Can static electricity trip GFCI?
0
How do you (safely) test a GFCI circuit breaker from the outlet when the circuit has no ground?
10
Why would replacing this 240 V outlet with a 120 V outlet trip my breaker?