How to cut out a piece of a stud fully from an existing wall?

I'm not sure what tool to use or how to use it to most effectively cut out a chunk of a stud of an existing wall that already has exterior wall sheathing on it. 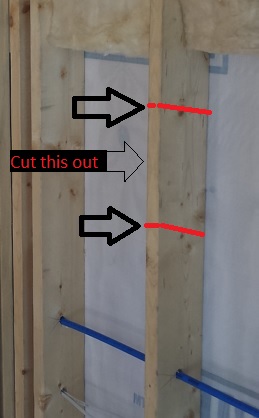 1) Circular Saw - all safety stuff says to not cut on something that is mounted on both ends due to the likelihood of the blade pinching. Combine that with the fact that the blade depth can't penetrate fully through 3.5" widths of the board, the best I could hope for is a partial completion of the cut. Add to it that I'll be moving the blade sideways as opposed to blade pointed downward seems like even more of a case for me losing control.

2) Reciprocating Saw - maybe this could be used in combination with the circular saw to finish the partial depth cut, but there's not enough space between the other studs to get in there flush. And if cut at an angle, the blade will disappear into the stud being cut and could be cutting into and through the exterior sheathing without me seeing it.

3) MultiTool - This seems to be a possibility, but the deeper the cut towards the wall makes me think that I have to get further and further at an angle that puts the exterior sheathing at risk of being carved right through.

4) Chainsaw - Kidding...but I'm out of ideas on how best to do this really.

I'd go for my pull saw or my oscillating saw/multitool

You should be able to get most of the way through with the oscillating saw and then finish it by hand with a compact hand saw. I like my compact pull saws to tight spaces like that.

Not the answer you're looking for? Browse other questions tagged tools studs cutting or ask your own question.

1
cutting 20 feet asphalt driveway
2
How to cut 45 angles in quarter round shoe molding with circular saw?
0
How to cut concrete block with a circular saw
3
What is my wall made of and how can I cut it without chipping?
1
Does portable band saw have fixed blade width to go with them?
0
Is it safe to cut the plug off a power strip (then reattach it) in order to run it through a wall?
0
What is the safest and quietest practical lightweight electric saw to cut 2x4 to use inside an apartment?
5
Cutting stud in load bearing wall to create vent opening for cooktop hood
2
How do you make flush cuts to a precise depth?