I installed a Siemens QT (2) two pole quadbreaker into my panel board. All 4 circuits go to the same location. The inner two breakers and outer two breakers are common trip. However due to my setup I would like all 4 breakers to trip if any single circuit breaks. I know they have tie down bars but cannot find one for a quadbreaker. Not to mention I will have to cut the existing common trip bars off. Is this safe and is there a correct way to do this. People on reddit told me to use a nail stuck through them all. However I don't think nails are UL listed ;) Below is an image of the exact breaker I used. Any input? 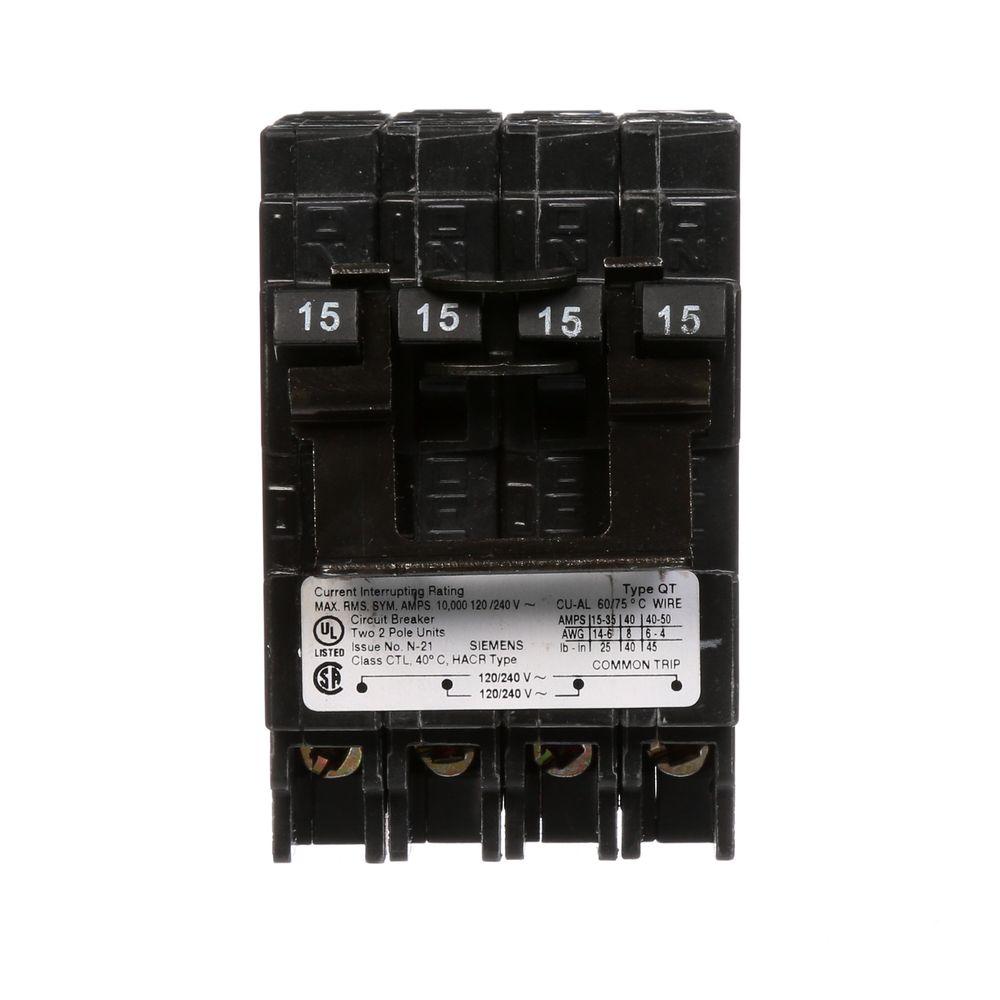 A breaker is a combination of an overcurrent detector and a switch, with a motor mechanism which causes one to throw the other. The motor mechanism is passive; it is a spring.

Each single breaker has enough motive power to throw its own switch, and also its partner switch.

It does not necessarily have enough motive power to throw four. You could have a horrible situation where none of the breakers trip because the other 3 are preventing the first's mechanism from operating.

You should not improvise such a thing. Contact the manufacturer for advice.

Can you live with three?

They may make 3-phase breakers for your style of panel. Obviously they are designed for phase A-B-C, but they will work fine with phase A-B-A which is what would happen if you put that breaker in a 120/240 split phase panel. Don't share the neutral!

They will not be duplex/double-stuff breakers, however.

Or use shunt trip breakers with a SCADA system

It's a "cost is no object" option, but it'll work. Most makers produce a "shunt trip" breaker - which gives you a 24-volt pigtail. Applying 24 volts causes the breaker to trip. Square D HOMeline probably doesn't offer one, but Eaton CL is UL-classified for that panel.

So now you have a supervisory device that works one of two ways: Either it listens for a breaker tripping (hot goes away) and shunt-trips the other 3 breakers. Or, it monitors the underlying conditions you are concerned about and trips all 4 breakers if programmed conditions are met. This is easy peasy with a simple Arduino or any other hobbyist-tier process control system. Rather than have the Arduino throw the 24V, you have it throw a 5V relay which throws the 24V. 24V can be sourced from a $15 thermostat transformer located in a panel knockout.

1
Do I want a common trip or independent trip quad breaker?
3
Sub-panel with single ground and common bar - with a twist
0
Can I safely wire a generator switch to two electrical panels
1
Can I replace two Siemens QP type, handle tied, single pole 15 amp breakers with a tandem QT type in the same configuration?
4
Understanding the wiring of 2-Pole Quad Circuit Breakers
4
Possible to ground-fault protect both legs of a MWBC with two single-pole breakers?
1
Follow-up to 12/18/20 Question about Feeding 2-Gang Receptacle Boxes with MC 12/4
8
Can someone explain this Tandem Breaker Setup to me?