How do I Test a Dishwasher Pump Motor

My Whirlpool WDT720PADM dishwasher stopped functioning properly last night. It will run through a full cycle, filling, draining, heating, soap door opens and steam vent opens at the end. While running, the main pump never sprays water or makes noise. I hear a relay click when it should come on, but it does not. It does not hum, just does nothing. I ran the diagnostic check on the machine and no new fault codes have been recorded. The dishwasher's processor thinks all is good. I also left the breaker off all night thinking perhaps something would reset by the morning. No good.

So, I opened the cover and tested the main motor's fuse through some pins on the board, it had proper continuity and negligible resistance. I tested resistance through the main motor through the two large blue wires running to it and it registered between 11 and 12 Ohms. I also found no continuity from either motor lead to ground. Finally I gave the motor 120 volts AC through the two large blue leads, flipped to try both polarities and got no movement or noise.

I am not able to test directly against the motor so there could be other smaller wires going into it that I do not know about that could have an impact. I also tested resistance on an old, known working, dishwasher pump motor and got around 11 Ohms, so I figure that number was reliable. I was almost ready to call it a day and order a new motor assembly, but ran one other test with the dishwasher running and at a cycle where the motor should have been running. There was no voltage across the two blue wires that run to the motor and I expected there to be. Now I am confused.

Are there better ways of isolating the problem without taking the pump out of the machine? That is the next step I think, but I would like to avoid it if possible.

In the image below, two green lines point at the two blue wires I have been testing the motor with. One looks red; it is blue with a red stripe. Other is blue with a white stripe. They are next to the hot and neutral lines from the wall. 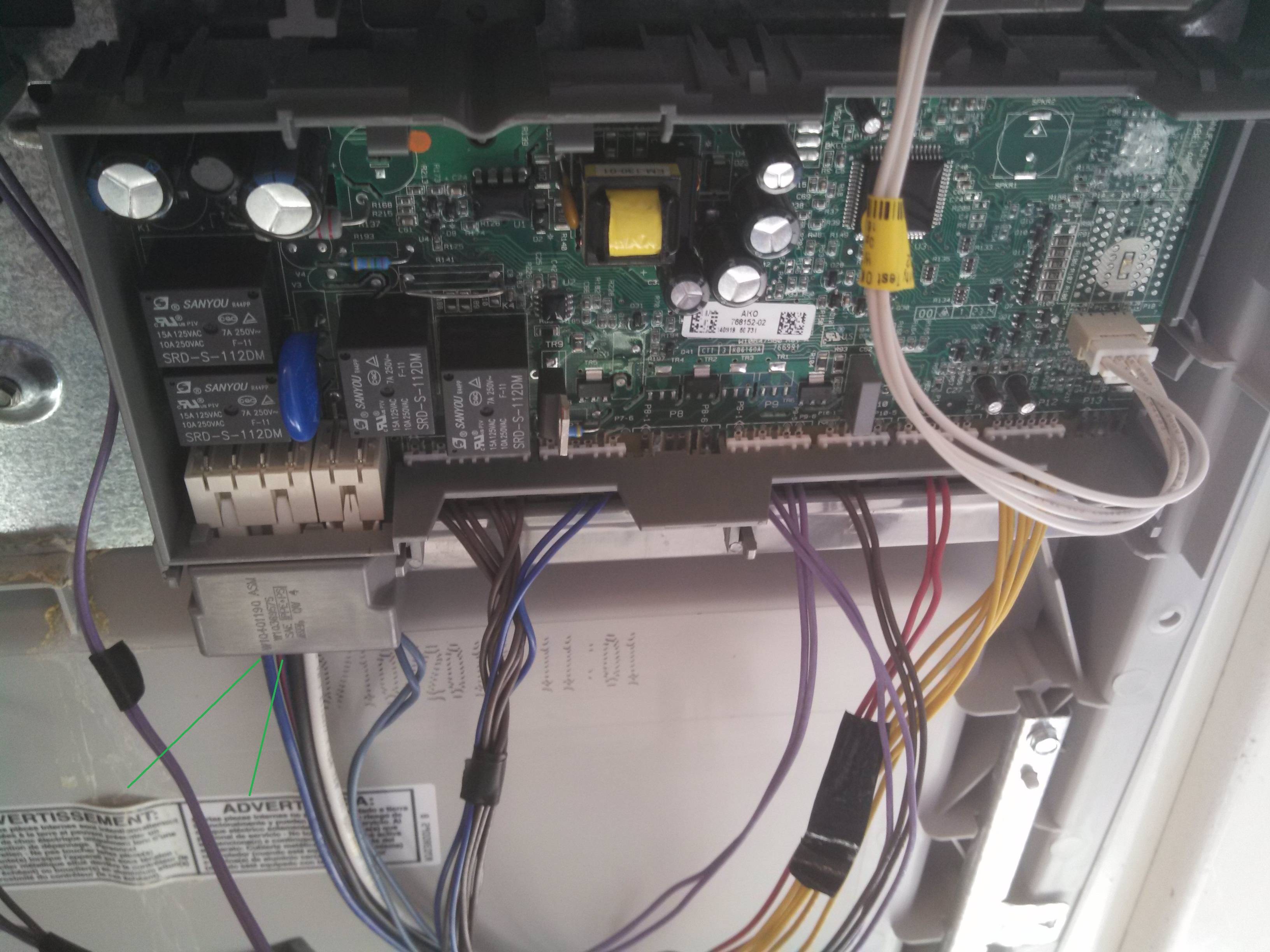 Test the main pump motor using the proper wires. The largest wires, other than the AC from the house circuit, feed the heating element. Those would be the two large blue ones indicated in the question's image. Heating devices generally draw the highest current. The main pump motors leads come off the board to the right of the AC in lines. They are a dull blue color and easily visible in the questions image. There should be continuity through the wires with very little resistance. There should be no continuity through either wire and ground. This setup is very likely the exact same for many different Whirlpool dishwashers.

Not the answer you're looking for? Browse other questions tagged appliances dishwasher pump electric-motor testing or ask your own question.

2
Dishwasher across from the sink? Way to make the pump stronger?
3
Dishwasher Drain Pump: How to Test?
1
Dishwasher drain pump and circuitry diagnostics
0
KDW60X16 Dishwasher - Not Pumping Water (Wash Pump)
0
Dishwasher Not draining at the end of the cycle
0
Bosch Dishwasher SHE43R52UC - Perpetually Stuck in Pump Out Cycle - Leak?