Looking for some advice on a very unfortunately timed breakdown.

Came home tonight to see some wet spots on the basement concrete near some cracks and looked over to see the sump put filled right to the top, past the lid.

The outlets where they're both plugged in have power. The battery's adapter plug shows a solid red light for "AC Power" and the "Charging" and "Charged" lights are off.

I borrowed a portable pump which is pumping water out into the backyard. After a few hours I managed to drain the backup pit, but it very quickly fills right back up from the inlet pipe until the water line is stable at about 1" above the top of the pipe.

I drained the main pit fairly quickly, and now it's slowly filling back up. Much slower than the backup, but it's also much larger.

Am I buying two new pumps on Monday and babysitting this portable pump every few hours?

Should the pits be filling to a certain level and stopping? The pumps seem to both be toast. I just now checked the battery adapter plug again and the yellow "Charging" light is flashing. No pumps running still.

Up until tonight I knew very little about these two pumps--we bought the house last year and the inspector said they both look fine and not to worry about anything. Now that I drained the main pit the pump looks really old and corroded it seems. There's also an old pop can floating in the bottom of the pit--half corroded out.

Would it be wise to run the drain hose for the portable pump into the roughed-in drain pipe in my basement? It's got an orange cap on it, but I assume that's a bad idea to let sewer gas in. It's just a vertical pipe coming out of the concrete, no P-trap.

Edit: Photos below showing the main pump, which I've now removed, and the setup of each (what I'm calling "main pump" is on the left).

To update, I can get the main pump to start running (or just humming) but not pumping water if I unplug the floater switch and plug the pump right into the outlet. I cannot do the same for the battery-backed "secondary" pump--it just doesn't turn on.

I notice though that each basin has its own inlet, the "secondary" basin is much smaller but doesn't seem to be filling from overflow from the "main" basin. It fills extremely quickly (2 minutes or so) right to just above the inlet pipe and seems to hold stable there.

The "main" basin fills much, much slower, but mostly from sort of under the pipe (the "secondary" has the same issue but less so, it's mostly coming out of the inlet pipe there). The main also seems to stop/slow filling but several inches above the inlet pipe.

I'm now going to clean the main pump and take the float switch off the secondary to try on the main. The secondary pump seems to be toast right now anyway.

Should that red piece on the drain pipe on the left be blocked off? I can't reach up into that pipe--it's like it's capped off inside. 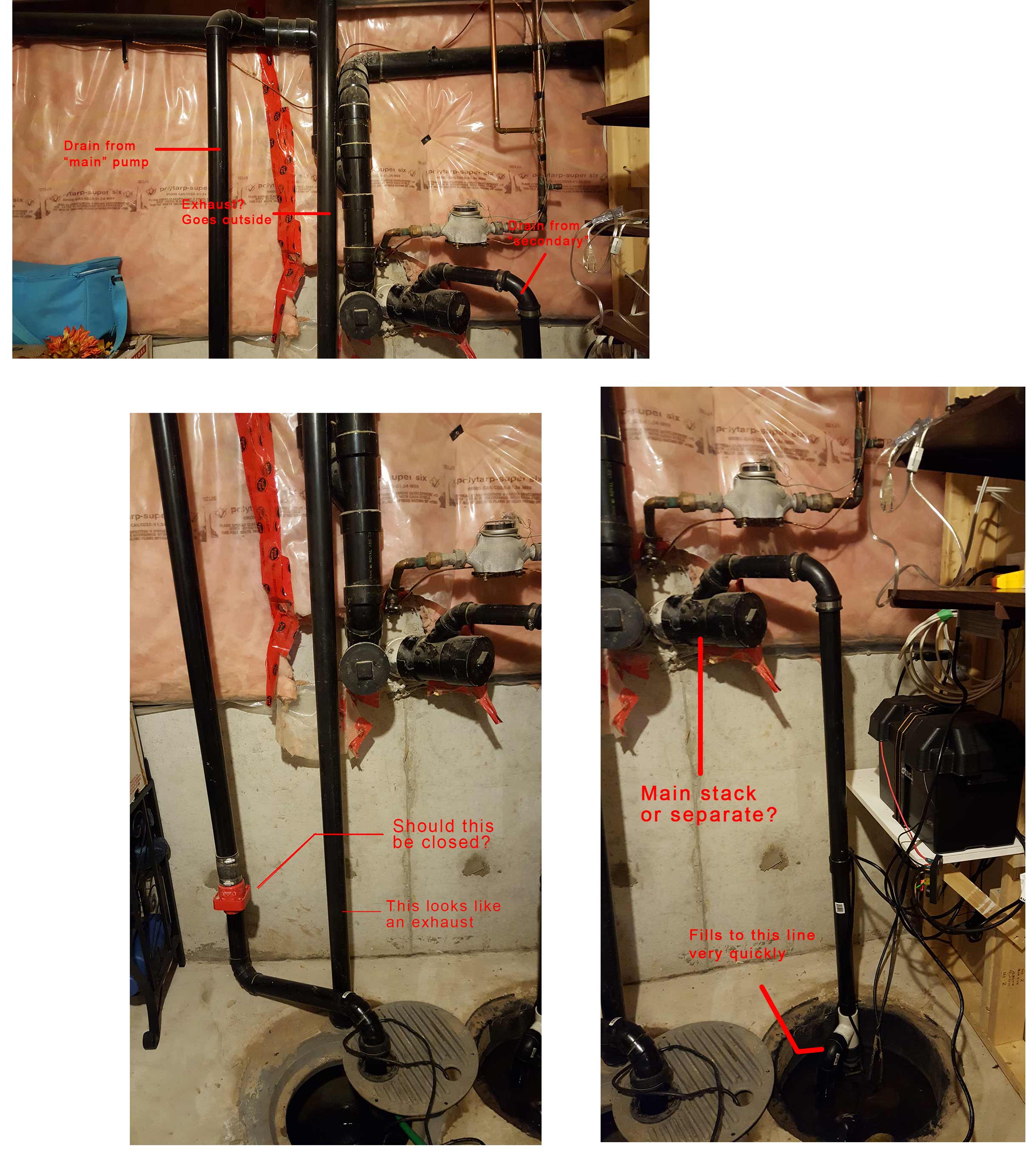 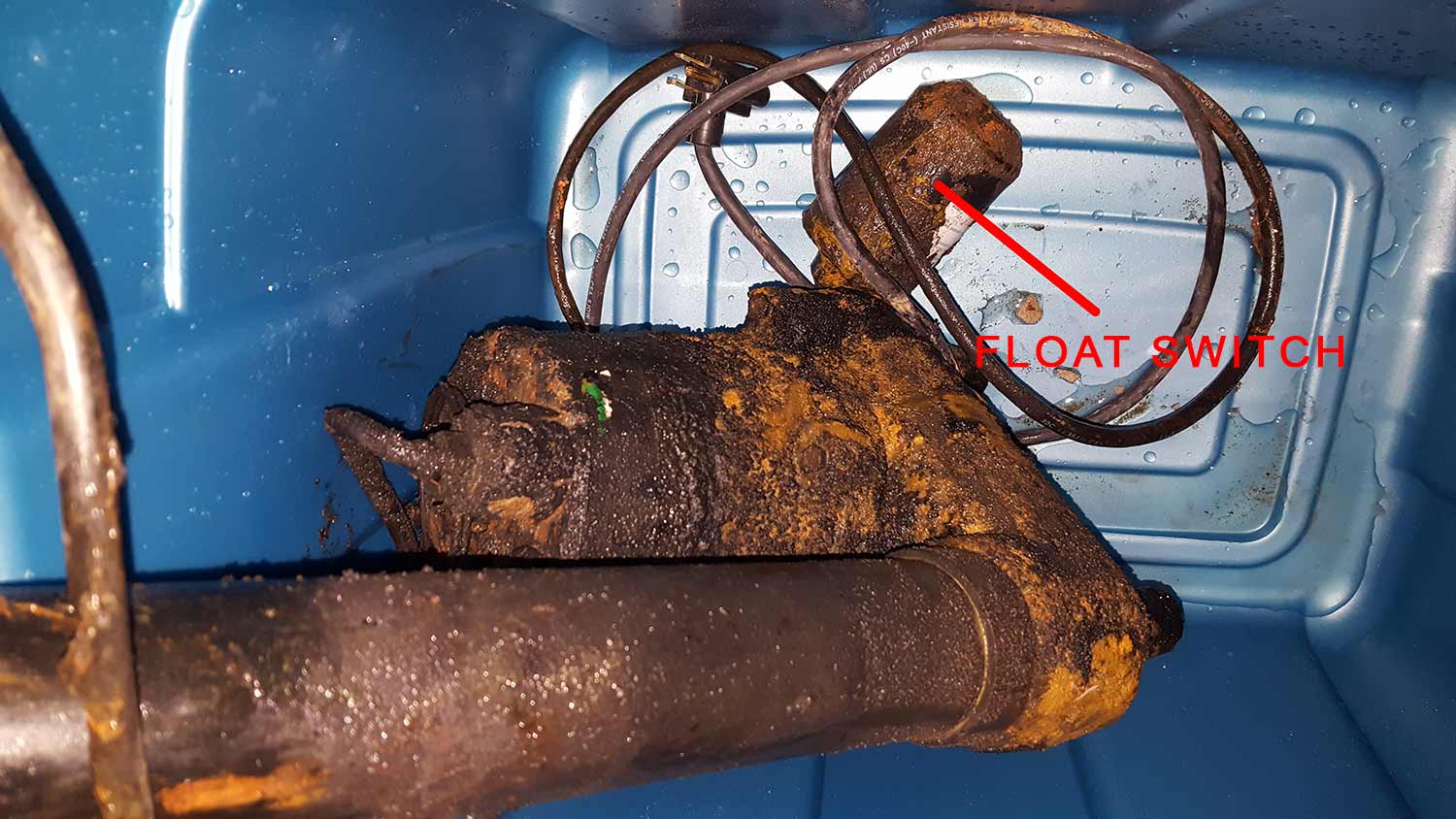 Edit 2: I cleaned the main pump the best I could, but it's pretty corroded. The float is now pretty clean. The inlet for the pump in kind of up inside the housing so there's not much I can do to get in there/inspect, but from what I saw it seemed clear.

After reinstalling the main pump and the float, the float seems to be working! If I pick it up and flip it upside down, the pump turns on. I'll wait and see what happens as the basin fills back up.

I could not switch the floats as I had intended because the secondary's float is actually part of the battery system and hooked into a panel, etc. Not the same piece. Didn't matter, since the original float seems to be fine.

I pushed in the check valve, too, before reinstalling it and about 2 L of water poured out, then it was empty. The hinged door seems to push with minimal effort.

Edit 3: I've replaced the float switch on the "main" basin's pump, and it's now working. That inlet pipe has stopped filling. I'll look for a deal on a new 1/2 HP pump to replace it since it looks like it's about reached its lifespan, but it's working for now.

I've taken everything out of the "secondary" basin (turns out it had a 1/3 HP pump and another battery-backed pump piggy-backed onto it) and replaced with a new 1/3 HP pump, which is working fine. I'm going to look into an emergency backup power system for both basins, rather than the method that used to be there that failed.

If you plugged the pump you borrowed into the old main's float switch (and you can get them both into the pit - or just get the float switch freed from the old pump and secured to the hose on the temporary one), you wouldn't have to babysit it.

Yes, you're buying two new pumps on Monday (assuming that the battery is good on the backup pump and it has failed also). This time don't put the alarm for it on silence (or make sure that the new one you get does have an alarm), so that you know when the main pump has failed.

If the outlet you're working out of isn't a GFCI, run an extension cord to one while you're messing with it. Later, when your hands and the floor is dry, you can hook it back in.

I have a sump in my house that runs a lot more when it is raining. The pump that was installed when we moved in was a 1/3 horse power. When that pump died a few years ago I replaced it with a 3/4 horse power pump. I should have replaced it like for like. The new larger pump pumps so much water that it empties the pit in a couple seconds. Sometimes the problem with sump pumps is the float sticks. The floats get loaded with crud and junk and just need to be cleaned off. Also the inlet screen gets loaded with the same junk (any dirt/mud etc.) that accumulates in the tank. These pumps should be inspected every few years. Pull the plug or shut off the electricity and inspect the pump. Clean off the inlet screen, check the action of the float and remove any junk. As for the pipe coming out of the concrete, you need to know what it is used for. Where I live it is illegal to run a sump pump into a sewer drain. I bought my pump at home depot.

4
Should I use a float "piggy-back" sump pump switch?
3
Sump pit filling very quickly from inlet pipes
5
How to seal sump pit with removable cover
2
Ejector Pit & Sump Pit Combined - Whats a good backup option?
0
How can I rig a battery backed-up sump pump for an exterior pit?
3
Do I need a sump pump in my new construction sump pump pit?
1
Sump Pit Bone Dry After Running Every 5 Minutes, How?
1
Back up sump pump not working
1
Water coming in BELOW sump pit inlet pipe! Is this normal?
0
Would I have flow issues if I hookup a 1hp sump pump along with a 3/4hp sump pump with a wye?