I recently bought a house built in 1958, with the original wiring. The outlets are not grounded (only two pins) and so I want to put some GFCI outlets as a hold-over until I can afford to have the house rewired with grounding.

One outlet I am working on is fed with two pairs of hot wires. They are on the same circuit, although when I turn the breaker off I still have 16V going through them, until I turn off the other breakers.

Would both pairs connect to the line side of the GFCI outlet? In that case I suppose I would not be able to chain other outlets off the load side. My main concern is that in this answer, the poster says

In this procedure, only one wire should make the meter light up. If more than one wire caused the meter to light, contact a local licensed Electrician.

I would like to learn more about home wiring, without putting myself at risk -- if I need to get someone who knows what they're doing to come work with it that's fine, but I'd still like to know what I'm dealing with.

Took another look today. With the multimeter I was able to determine one pair that never had any voltage (I've separated all the wires from the outlet) so that must be a load pair.

As a note, when I initially wired the GFCI outlet, it tripped as soon as the breaker was turned on -- would that other circuit be coming into play to cause that? I did try wiring the outlet both possible ways, swapping the two wire pairs between load and line inputs, and it still tripped.

Onto the outlet, here is a picture, apologies for the less than great quality. Bottom line though, there are no tabs on the outlet and nowhere that looks like tabs would have been broken from. 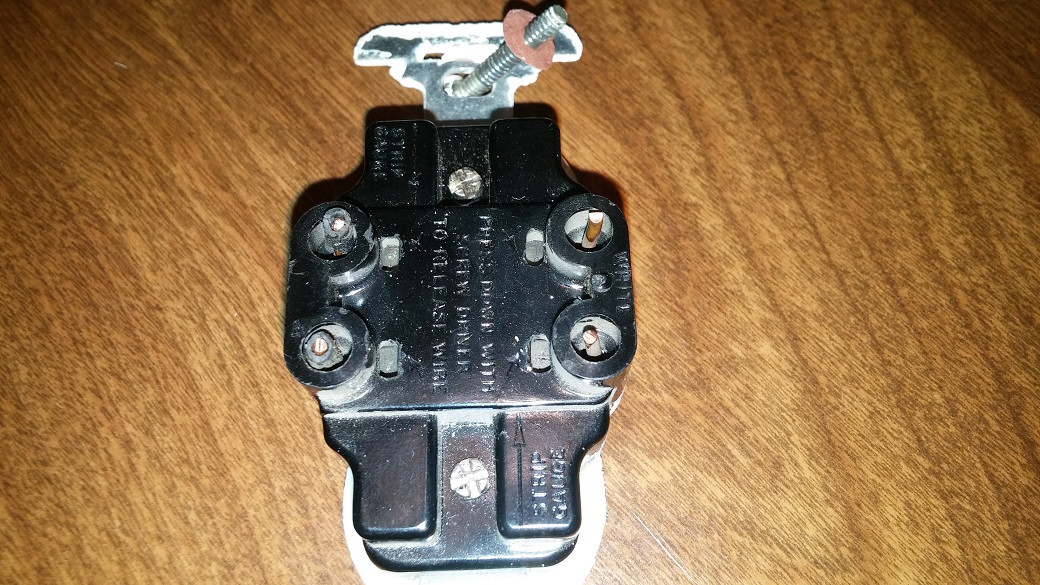 Pick a circuit and stick with it

It appears that the existing wiring is confused, as it so often is in buildings of such vintage, and as a result you have one receptacle device that somehow got fed two circuits (one always hot and one switched hot) in a way that probably simply rendered the switch useless (as it was backfed power from the always-hot circuit to its load side).

Your well-intentioned-but-naive GFCI hookup attempt failed because the GFCI was seeing at least some voltage on its LOAD side and tripping/refusing to reset as a way of signaling "hey, dude, I've been wired wrong and can't help you because of it!" This is a very important safety feature in the current generation of GFCI receptacles -- instead of silently offering an illusion of protection, they will do everything but scream to tell you about outside power appearing at their LOAD terminals, as that backfeeding both can render the GFCI unable to provide protection and can damage the GFCI's internals.

So, you need to decide whether you want the GFCI on the always-hot circuit or the switched circuit, and cap off the wires in the box for the other circuit with wire nuts, then connect the wires on the circuit you want to use to the GFCI. Just make sure to keep which hot goes with which neutral straight to avoid a giant loop in your wiring.

You need to find out whether the tab was broken.

If the tab was broken then you are dealing with two seperate feeds. Possiblly a switched and unswitched feed, possiblly feeds from both sides of a multi-wire branch circuit. You should connect one of them to your new outlet and cap off the other (or fit two seperate outlets if you want one on each hot wire).

If the tab was not broken then you are likely dealing with an onward supply to something. If you can fully isolate both the hot and neutral sides of that onward supply then you can connect them to the load side of your GFCI.

If you can't fully isolate the onward supply or you don't want the downstream wiring to be protected by your GFCI then you can pigtail the wires and connect only to the feed side of your GFCI.

You really want to do something about this. At the very least remove and cap off that switch but really you don't want to have electrics that you don't properly understand.

IMO you should be seriously considering rewiring at this point both to add grounding and so that you know the wiring is free of horrible dangerous bodges.

As a note, when I initially wired the GFCI outlet, it tripped as soon as the breaker was turned on

This most likely means that your "load pair" is not a fully isolated circuit.

Current that goes out through a GFCI must come back through the same GFCI. I would guess that one or more downstream loads gets it's neutral connection via a different route so current goes out through the GFCI but doesn't come back and trips it. Or the neutrals upstream and downstream of the GFCI are connected together making a loop of some sort.

It's also possible that a downstream load is leaking to ground somehow.

If you want to protect the downstream wiring you will need to thouroughly inspect it to ensure that it is fully isolated from any other wiring.

It would be very unusual to have 2 hot wires from the panel. Unless one of the outlets is controlled by a switch.If you are using a non contact detector the induced voltage from the hot can trick the tester and it will light. A inexpensive volt meter would be a better piece of test Equipment to verify the hot wire. You may read 40-80 volts on the wire that is not hot this is the induced voltage from the 2 wires running in parallel but there is no real potential or current available. The wire that shows 120vac is the hot from the panel this is the wire/ cable you want on the line side and the other wire/cable on the load side then all the down line outlets or devices would be GFCI protected. They should be labeled no equipment ground until your 3 wire upgrade is complete. Not sure why I got a down vote especially since my answer was correct 2 wires entering the box 1 is hot 1 goes downstream.

6
How do I wire a GFCI receptacle using two black wires and two white wires?

5
Can I connect two load lines to a GFCI receptacle?
4
How do I replace two split receptacles with GFCI receptacles?
1
GFCI receptacle with a light fixture with an on/off switch in between
1
Protecting multiple outlets with one GFCI; is it possible with this wiring scheme?
1
How to wire an outdoor GFCI with two pairs, both hot?
0
wiring a switch mounted next to a gfci
0
Replacing GFCI and found two hot wires
2
How do I intall GFCI breaker if wire for outlets is 12/3 using two breakers?