Determine if wire in switch box is safe to re-purpose?

I need to pull a neutral wire to my light switch for a smart switch. It's presently switching an outlet that I don't need switched, and the other side of the outlet already has unswitched power. My plan is to use a smart switch, which requires neutral, to control a different device wirelessly.

I can't feasibly run a new wire, because the wires aren't run through conduit. Instead, my plan is to repurpose the switched wire to get neutral from the outlet.

The switch, which controls an outlet has two wires, one black and one red. The switched outlet has a white neutral wire, plus the red and black wires that I assume run directly to the switch.

I've completely disconnected the red and black wires from the outlet and the switch. The black wire is measuring 120V AC when measured against ground using the box as ground, both at the outlet and at the switch. Using my DMM, the red wire is measuring 24V AC with respect to the box/ground at both sides. I assume this is a ghost voltage caused by induction from the charged black wire over to the floating red wire.

Our house is ~100 years old and this particular switch seems to be run using armored cable (note the paper wrap around each wire.) There are literally only two wires in the switch box; no wire nuts.

If relevant, we do have some old knob and tube wiring active, but I'm pretty confident there's none on this circuit.

Is there some way I can determine with enough confidence that the red wire isn't connected elsewhere such that I can know it's safe to connect the red wire at the outlet to netural? 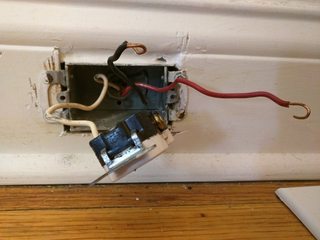 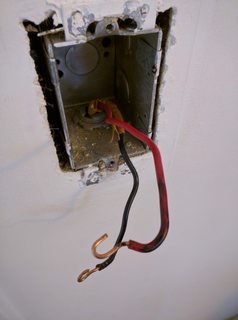 I bet that the 40V measurement is likely a "ghost voltage," which is a misleading reading that can show up as a side effect of using a digital voltmeter on a dead wire. The misleading measurement happens because there is capacitive coupling when you have an un-energized wire running next to an energized one. The impedance of the voltmeter itself causes the high voltage to register, though the current it is capable of delivering would be miniscule. In this case, it would be from the switched wire running next to the hot wire.

To determine whether or not the voltage is actually present and being fed from a true voltage source, rather than being a misleading reading of an induced voltage from an adjacent wire, you need a low-impedance voltmeter. Fluke makes several.

Given that this is the only time I am likely ever going to need this test, I'm not going to purchase a dedicated low-impedance tester. Instead of doing that I'm going to do a few brute-force tests.

We're going to start with the assumption that the red wire is likely connected to nothing other than the outlet. Today, when the switch is closed, it sends connects the black wire to the red one and sends hot down the red wire.

Obviously, this was done at my own risk. Current to ground came up with .001 mA. Tied the red wire to neutral at the outlet, connected the smart switch, and works like a charm.