Can I reroute this air duct?

I'm quite new to dealing with HVAC duct-work.

We would like to install a suspended ceiling in this room. Since the finished ceiling will be higher than this duct-work, we're going to build drywall bulkheads around them.

In order to reduce the wasted space (and having to build more bulkheads), we were thinking of running the two 7-inch ducts from the end of the main duct. This way we can build a single bulkhead around the main duct and continue it, containing the two smaller ducts, to the exterior wall where they turn apart and run upstairs. Both 7-inch lines lead to registers in the floor immediately above, approximately 10 feet apart, on the same wall.

Are there any good reasons not to do this (such as loss of pressure in one of the lines)? Would it be better to replace those two lines with a larger conduit and branch it when it reaches the wall? 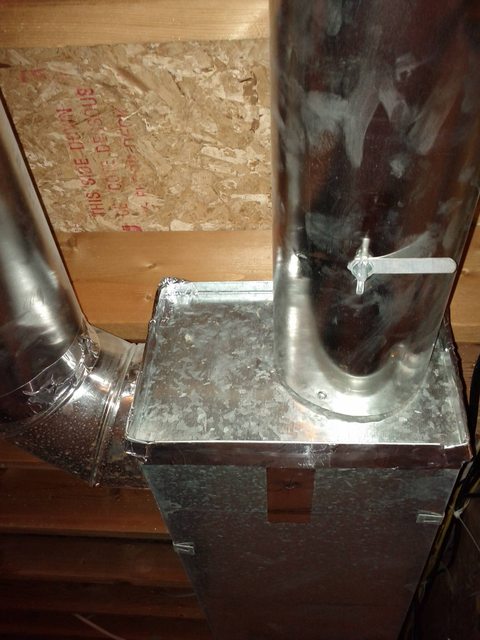 I don't see a problem with that, other than the existing duct doesn't look wide enough to fit both. You'll have to get/build a reducer that goes from something slightly wider (that can support both circular ducts coming out of it) to the existing square duct size. Most metal shops can build this sort of thing for you - I had a couple 45-degree elbows built to re-route some ducts in my basement, it cost me around $50 I think.

Another option would be to extend the main duct, and split the two round ducts off at the end. Not sure how long those are now, but the box stores carry a few regular square duct sizes you can buy and assemble/install yourself.

Not the answer you're looking for? Browse other questions tagged hvac ceiling or ask your own question.

3
Can I increase air volume by adding more fans?
4
How should one size ductwork for a new air return duct?
4
Where should I tap in to the existing duct work?
3
How can I move hot air from a cathedral ceiling to colder bedrooms?
0
Should I change the routing of the return air flex duct?
2
Is there a way to easily split a wall register?
0
Fixing tear in insulated HVAC duct?
0
What are the pros and cons of having a return "duct" in each room vs. 2-3 large shared returns?