What if I have this case:

In the US under the NEC (I believe Canada is similar) you can run 80% load on a circuit 24/7. You can run 100% load intermittently, or by accident, or even occasionally if it's not expected, even for three hours or more.

The key is the actual definition of "Continuous Load", not an arm-chair definition, or what an old timer always told you.

A load where the maximum current is expected to continue for 3 hours or more.

What you're asking is: If you ran the wire up to NEC-authorized limits, would it start a fire?

That is the whole point of specifying safe limits. Now, if you really want to push the limits further and your application is commercial/industrial, Code permits you to go into dozens of pages of gory-details rules. For instance, there are three different ampacity tables depending on wire temperature of 60C, 75C or 90C, and the rating of the terminations, commonly you can't run wire at 90C ampacity because your lugs are only good for 75C. It's intended for larger industrial usage with thick wires -- but if you apply those rules and tables to household wiring, you'll see where they've built in an extra de-rate of 30-50%.

With household wiring, NFPA said "We need to simplify this so an average Joe can wire their house, and he and the next guy can be sure he did it right, without arguing about pages of picky rules in the NEC." So they said "14AWG = 15A, 12AWG=20A, 10AWG=30A, period, we're done". So you don't need to spend hours calculating all gory details, if you have a 20A circuit, you can just use 12AWG and know that you're golden.

Industry spends time/money Code-lawyering because they're dealing with thick, expensive cable and the cost of the cable justifies the thermal engineering effort. Not in a house, where it's thin wire and the cost to go up one wire size is fairly trivial.

VA is a factor

You know that AC power is a sine-wave. It's assumed most loads work like a resistor: at any instant, their current draw is proportional to the voltage. What happens the load draws unevenly, with current not proportional? Like this disaster - this is an incandescent lamp dimmer. 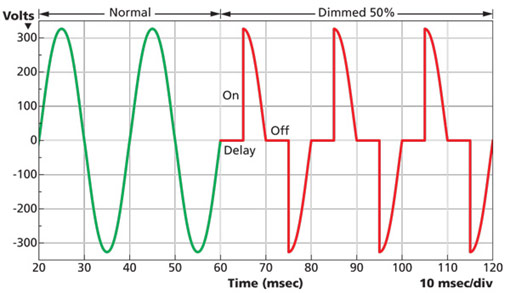 Yes, it's as ugly as it looks.

How do we even calculate that? They created a special unit called "VA". literally, Volts-Amps. Yes, it sounds very similar to watts. VA describes the power (i.e. watts) which the wires must deliver (even if the load doesn't use it all). The above would be 100 VA, and 50 watts.

You need to plan your loads for VA. For instance your circuit with 220V x 15A = a capacity of 3300VA. (told you, it's just like watts). Look at the VA of each of your devices and calculate accordingly.

There's a USA$20 device called a "Kill-A-Watt" which will measure a device's load and read out both watts and VA.

How do we describe the relationship between watts and VA? Power factor. It is a ratio: Watts / VA. A perfect load has a power factor of 1.00. The example above has a power factor of 0.50, which is terrible by the way. One of the problems with the rush to CFL and LED bulbs has been cheap power supplies with very poor power factor, and laws in the USA have encouraged manufacturers to clean that up, which can be done by spending a few extra pennies on the power supply section.

Even with a continuous use of all 52 lights you are below 80% as shown by your calculation. I find homes regularly that have closer to 100% and get called because the breaker is tripping. 80% is a good safety factor and even if above this level the wiring is not going to melt down as long as the wire size is matched to the circuit breakers. (If memory serves in an industrial control panel 14 awg wire is rated for 40 amps) So there are safety factors built into residential wiring and you should be fine.

Not the answer you're looking for? Browse other questions tagged electrical lighting circuit-breaker or ask your own question.

1
Can I install a floodlight with 18AWG conductors on a 20A (12AWG) circuit?
2
Derating a dimmer when using LED lamps?
1
How many LED pot lights per circuit?
0
83% of rated load on 30 AMP 240V dedicated circuit - safe?
0
Are there restrictions on having all the lights on one floor on a single circuit breaker?
1
60amp panel install in an attached garage, do I have my ducks in a row?
0
How to calculate wattage used in a solar panel set-up
15
How much power do LED smart bulb wireless control systems consume when the light is turned off?
1
Why are some of my string of LED lights dimmer than the rest?