Anyone know of a knot to tie two wires together under strain?

I'm putting up a wind turbine. The turbine will be at the top of a 30' 1-1/2" pipe tower. I have a 30' RV extension cord (10ga/3 conductor) that I'm going to cut the ends off of and use as my down-pipe wiring. The wind turbine itself has a foot or so of 10ga stranded wire hanging down on the inside of the tube from the bottom of the turbine (three wires). They say that this wire can support 55# of downtube wiring (total, on the three wires), which is probably right, but I have my doubts that a crimped connector will hold that weight. The extension cord supposedly weighs 12# at its full 36' length, including the ends I'm going to remove, which are probably a pound of the total. Full weight of the 30' that will be dangling will be about 10#, but it has to be able to deal with twisting forces a bit too.

The strain relief being referred to in comments: 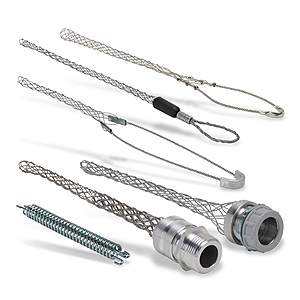 You'll probably need to visit an electrical supply store in your area to pick one up, I've never seen them in a big box store. 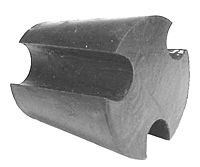 Looking at the manual for the next larger wind turbine, it very specifically says to use standard sleeve wire crimps to connect the wiring coming out of the turbine to the down-tube wiring. These support wedges would clearly be better than that. They're wood. You set your wire into one or more of the openings (anyone have experience with these who can tell us how to size them? The 'wire fill' part isn't clear), and drive the wedge into the tube. The wood compresses going into your pipe/conduit, and compresses onto your cable in the process, holding it in place.

Hope that helps someone in the future!

Not the answer you're looking for? Browse other questions tagged cables rope-knots or ask your own question.

0
What are the two-strand wires used for?