What are the risks of sending low-current neutral through the ground wire?

I have an existing switch that controls an outlet. I'd like to replace it with a smart-home switch, which requires a neutral wire to power the switch itself. However, there is no neutral wire at the switch. It's infeasible to run a new wire because the switch wasn't run with conduit, and I'm not willing to tear up my walls.

It's my understanding that I could use ground as neutral for low power applications such as this. Are there any risks, either safety or electrical reliability of doing so?

Yes there are risks to safety.

If anything interupts the ground conductor that leads back to the service entrance, suddenly your switch is energizing the ground on that circuit, so anything connected to it is also going to be energized (i.e. a printer that has a grounded metal chassis suddenly has a live metal chassis).

You guess that this is only a few milliamps, but do you know under all operating conditions that this is the case? Just 10mA is enough current to cause muscular paralysis -- and 100mA is fatal.

You may think that "well yeah, but it would take multiple bad things to happen for this to be a safety hazard"... but you're already doing one of the bad things it would take, so you're one conductor away from a very unsafe situation.

There are some smart switches rated for use without a neutral (but they generally only work with incandescent lamps).

Since you're just controlling a receptacle, the easiest thing to do is use a plug-in lamp or appliance module.

But if you were controlling a ceiling light fixture, you could use an in-line switch module that wires in at the lamp fixture itself instead of at the switch: 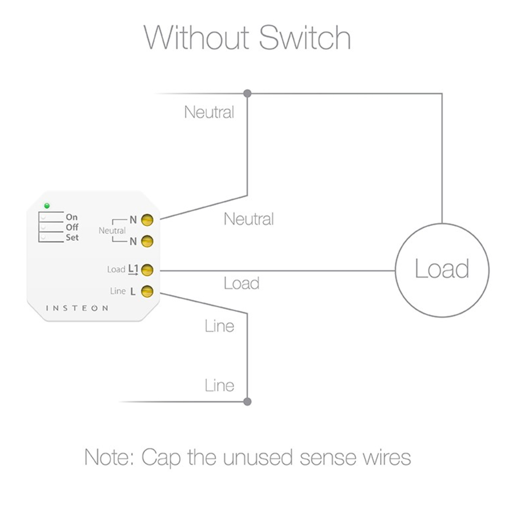 You could keep the switch on all the time to supply "line" to the lamp fixture, and use the existing neutral at that fixture, then let the switch module control power to the lamp. Then you can use a batttery operated wall switch to control the lamp module.

Well here's the thing. You say the switch is controlling the wrong outlet anyway. (this is the scourge of modern construction; electrical code allows builders to connect the mandatory switch to an outlet and provision no lights in the room at all. Leaving random tenants responsible for safety lighting is a disaster, ask any first-responder.)

One option is to re-task the switch-loop wires to be an actual hot and neutral. (they are probably black and white already.) You now have always-hot at all outlet locations and at a switch location.

Now install a smart-switch which is powered, but uses wireless or power-line communication to communicate with a remote module at the location you want to switch. You now have a great deal of liberty as to where to put that.

There are smart switches that do not require a neutral. By design, they "bootleg" some neutral / return current on the ground wire. However, if they are legal and listed, they are tested to limit the bootleg current to some tiny amount that is considered safe by UL.

Generally bootlegging a neutral - using a ground wire as a neutral - is an unsafe practice:

The equipment grounding system (EGS) provides a path so that in the event of a ground fault, there is a low impedance path to complete the circuit, so that sufficient current will flow that the breaker will trip. In typical residential systems in the US wired with nonmetallic cable (Romex) and plastic boxes, the bare wires make up the bulk of the EGS.

Generally the EGS is not carrying current, not energized, even with the power on. In the event of a ground fault it will very, very briefly be energized until the fault is cleared. Faults generally create a dead short and short circuit current is very high.

If someone working on the electrical system, testing, troubleshooting, etc. assumes the EGC is safe, but it's carrying bootleg neutral current, they could receive a shock.

There can be some sharing of EGCs between circuits, retrofit EGCs not run with branch circuits, etc. In these cases even with the circuit you're working on turned off at the breaker, the EGC could carry current from another circuit. So in some of these circumstances, even things like plumbing pipes could wind up carrying some of that bootleg current. If there are multiple not-so-smart devices bootlegging neutral current, it could become more dangerous.

I think most would agree bootlegging a smart switch does not constitute a huge, immanent danger where you ought to get the children out of the house immediately until it's rectified.

But all would agree it's a code violation, and most would agree that re-writing the code to be more convenient for you, or picking and choosing where you're smarter than the code, is some dangerous hubris.

As mentioned in another answer, smart switches with remote units that can be installed at the light are a safe alternative.

First things first. You asked two important questions I shall answer them in bold.

Fact is, per the NEC, manufacturers of smart devices have up to the year 2020 to redesign all of their devices so the do not use the equipment grounding conductor "Green/bare wire" as a neutral. There are exceptions too. The Code reads as follows:

Parallel paths is the main reason. Electricity doesn't take the shortest path back to the source, it takes every path possible. Enabling alternative paths can create shock conditions.

Not the answer you're looking for? Browse other questions tagged electrical switch grounding home-automation neutral or ask your own question.

2
Determine if wire in switch box is safe to re-purpose?
0
Apartment using ground wire as neutral
2
Smart Switch Wiring Question: What is the Need for a Neutral Wire? How to Provide One?
1
How can I get a neutral wire for this switch?
1
Can I use this neutral wire running through the switch box for my smart switch?
3
Installing smart switches in 2-gang box with switch loop
5
Can I connect the neutral wire ends via a single switch terminal (without a pigtail)?
1
Convert 2 gang no neutral light switch into 1 gang to power a smart-switch that requires neutral. Possible? UK
0
Is this the correct action to fix a "smart" switch whose neutral and ground wires are tied together?