Why are my new switches tripping the circuit breaker sometimes?

There are 3 switches in my hallway. One switch on side A and two switches on side B. Side A switch controls same light as one switch on Side B. I replaced the switch on Side A and now, when the switches are in a certain configuration, you can hear a buzzing sound and then the circuit trips within 10-15 seconds.

I feel like its a grounding issue, but I don't want to touch anything till I'm sure. The switches all work as they should except for when a specific configuration of on/off exists, the circuit goes haywire.

Any ideas on what the problem is given that a buzzing sound happens and then the circuit trips?

EDIT:
There are two lights, switch A and switch B1 control one light, and switch B2 controls a separate light

The wiring/power source is unknown - could come from the 2 switches at opposite end of hall.

That sounds like a short to me, and a potential fire or electrocution hazard. Leave the breaker off while you fix this. With a 3-way light switch, you'll have two possible paths between the switches (which is why there are 3 screws + ground, 1 line/load, and 2 switched). My guess is that one of the two switched wires is grounding itself. Remove the switch that you worked on, and see if the ground wires are coming into contact with any other wires.

First off, I agree with BMitch.

To diagnose the problem I would first want to understand the configuration of the two switches. The typical way these switches are wired is as follows.

So, first off, is that the situation you are in? That is not the only way to wire a three-way switch, but it is the most common. It looks like this: (Note that the bare ground wire is not shown.) 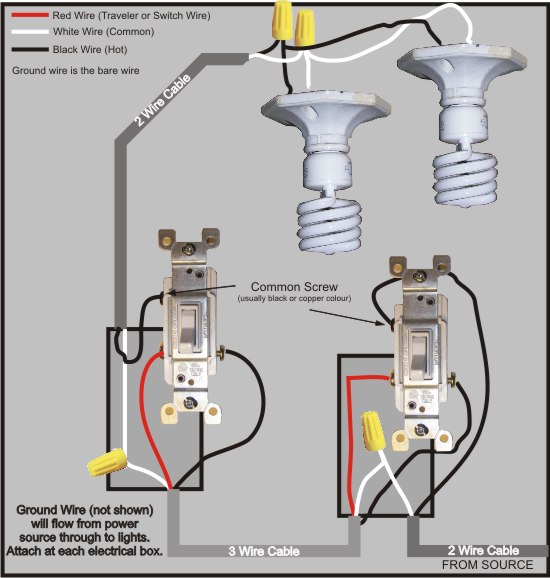 The way it works is: the first three way switch chooses whether the red or black wire to the other switch is connected to the black hot wire from the panel. One of the two is always connected.

The second switch chooses whether the red or black wire from the other switch is connected to the black hot wire to the light.

When both switches agree, the light is on. Otherwise it is off.

The first thing I would check is:

Either you mis-wired your switch, or there was some other problem which probably caused your old switch to fail.

If you replace a 3-way(US) switch, you need to make sure that you keep track of the common wire. It will be attached to a screw that is usually black, or copper colored. As long as your common is maintained you shouldn't have any problems.

Now to your specific problem.

I'm going to assume that when you replaced the switch you mixed up the wires, and have no way of remembering which wire is which. I'm also going to assume there isn't something else wrong that caused the original switch to fail.

If you are not comfortable around live wires, call an electrician.

If at any point you are confused, or afraid of electrocution. Turn off the breaker, and call an electrician.

I agree with the information in the other answers completely. But one point they missed: If you are reasonably sure you wired the switches the same, then one possibility is that when you pushed the switch back into the box, the various wires bent such that the ground wire is lightly contacting one of the travelers (what makes a three-way switch work).

Consider - this only happens when the switches are in a specific configuration (leads me to question the traveler), and it buzzes before tripping (leads me to believe it's a relatively high impedance short).

Before tearing the house apart, you might consider pulling the switch out of the wall again to make sure there isn't arcing at one of the switch poles.

Buy a new receptacle. Make sure it is 20 amp and your breaker is 20 amp as well. Chances are the receptacle has hot & neutral reversed and received a surge of power, blowing the line load off or line load leg, and causing the already tripped breaker to stay tripped because there is no longer a leg to carry the line load to the remaining slaves or receptacles after that may be connected to not function, thus no way to complete the circuit so it remains tripped. Replace that receptacle with a GFCI if it's the master for that room or a set of receptacles. If it's after or a slave just get a normal 20 amp receptacle and be sure to carry the load on the correct terminal screw

Not the answer you're looking for? Browse other questions tagged electrical lighting wiring switch circuit-breaker or ask your own question.