I have a small off-grid cabin in the woods that I recently purchased. The previous owner had a L14-30 generator connector installed on the outside of the cabin and wired it with normal 120v outlets 4 light sockets I plan to put LED bulbs in. I camp up there maybe once a month and wouldn't use much power; just the lights and maybe charge a laptop to watch a movie, so was looking at getting a solar generator kit (something like the GoalZero Yeti).

What I haven't found is a battery backup system with a L14-30 connector; all the ones i've found so far just have normal 3 prong 5-15 connectors. Can I use a 5-15 to L14-30 connector adapter to run the cabin? Picts of my inlet box connector and circuit breaker box below. 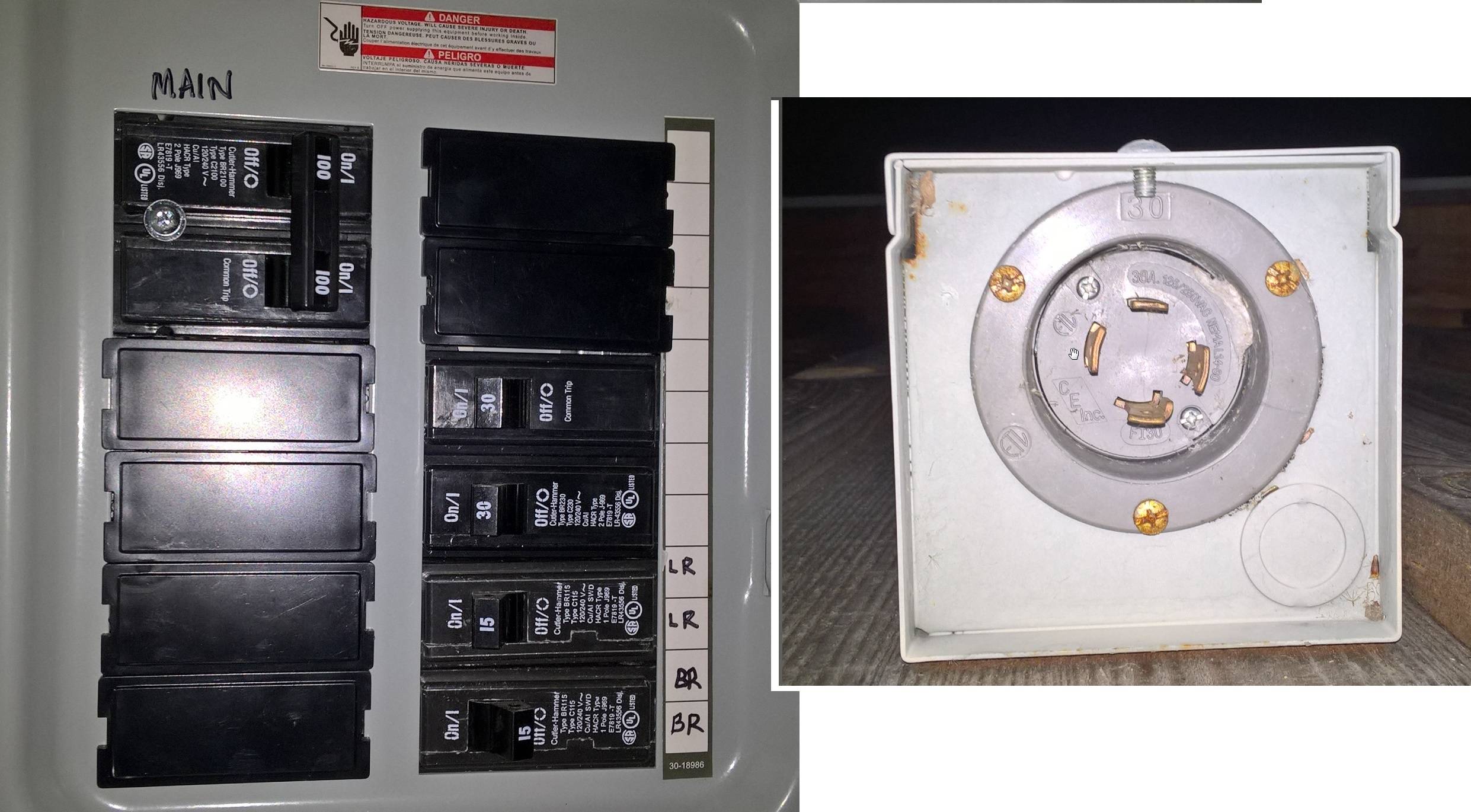 If there are no 240V loads (seems likely) and if your inverter package has an appropriate output breaker to protect itself from overload (since the panel is clearly going to be able to draw far more than the inverter supplies) you should be fine, but you're almost certainly going to need a custom-made cable, not a pre-purchased adapter.

The L14-30 has hot1, hot2, neutral and ground. A 5-15 has hot, neutral, and ground. The expected voltage between hot1 and hot 2 is 240 volts. If there are only 120V loads, you can connect both hots on the L14-30 to the single hot on the 5-15 and it will work, up to the point that the inverter overloads (not too likely if your loads are as described, but then someone plugs in a coffeemaker or hairdryer.)

As the breakers are currently arranged, feeding only one of the two hots would leave half your circuits without power.

Most of your more serious off-grid inverters will happily supply 240VAC, and don't come with a receptacle at all, as they expect to be hard-wired. If you are going to connect a tiny inverter and keep the loads tiny, it should work with an adapter made as described.

I strongly suspect that you can do a lot better (cost wise) with a built system than the pre-packaged one.

Not the answer you're looking for? Browse other questions tagged generator solar battery or ask your own question.

0
L14-30 Plug & Generator
3
Solar backup system, advice needed
1
Making a Solar Power Battery Backup Unit
2
Charging a battery with a solar panel
0
Wiring L14-20 Receptacle on generator to a 6-20 Plug
3
Proper way to plug in generator cord?
0
Solar air conditioning
5
8500 W generator with L14-30 plug.. How to access full capacity for house?
1
What can I use redundant/spare AGM batteries for?