I would like to install a projector to my living room ceiling. As the ceiling is relatively low, however, I'd like 1) to have the projector "standing" there upside down (in contrast to a mount that takes up another 20cm or so of room height). I held it there and the projection is pretty perfect this way. Heat and air circulation are not an issue. Also, 2) I'd like to use some sort of clip system to slide the projector into and out of if I don't use it. There have to be be some sort of metal plates that can be screwed onto projector and ceiling which fit snugly into each other... some help would be greatly appreciated. Thanks!

Just use thumbscrews to attach the projector to a low profile mount, like this one. This approach allows you to maintain the positioning settings of the mount and have the projector free of mounting hardware when you detach it for use elsewhere.

Alternatively, build a small wooden box or shelf and set the projector on it when you want to use it. If you use a shelf like the one pictured below, you can use hooks instead of eye bolts for mounting so that most of the shelf can be taken down when not in use. 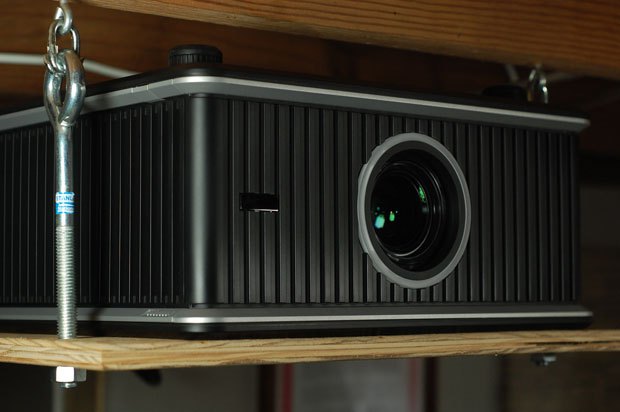 If it was me working at making a projector mount for ceiling on a DIY basis I would work out how to make an open bottom box that is up in the ceiling between the ceiling joists. Then a platform for the projector is the lower cover for the box and is designed to swing down below the ceiling level using pantograph type arms. Pull down for use and push back up into the ceiling when not in use.

Such type of thing could be trimmed out with nice looking hard wood. For those really into automation a remote control activated motor could be setup to raise and lower the projector.

Here is a random picture capture from Google image search for "hidden projector mount". There a plethora of examples. This first one looks like it may be a commercial product. 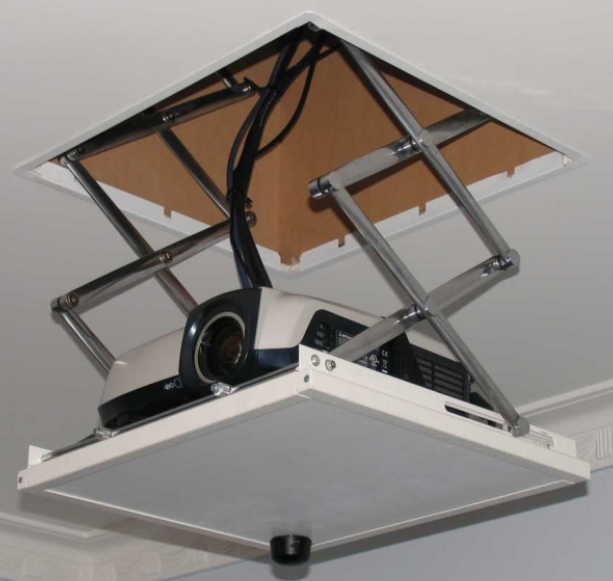 This one on the other hand looks very much DIY and was made to pull out from a soffit near the ceiling. 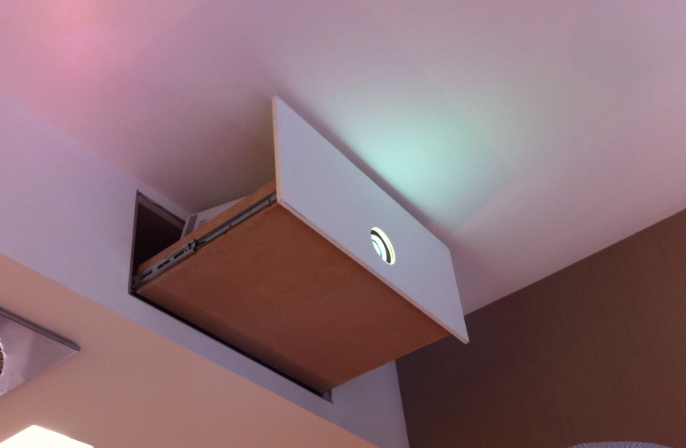 Not the answer you're looking for? Browse other questions tagged ceiling mounting projector or ask your own question.