How to confirm screw is attached to stud through wood plank and dry wall?

Vaulted drywalled angled half ceiling (15'X13') and would like to attach barn wood planks.

It's an aesthetic ceiling - meaning it does not actually follow the roof. Rather, it is an angled "box" inside the attic, over that room, with a 2 foot gap between the top of the box and the inside of the actual roof.

The "ceiling box" does have seven 1.5" joists running down it, however, they are not very straight, they slightly curve all over the place.

The plan is to attach 3/4" thick by 6" wide reclaimed barn wood planks to the inside ceiling (as shown here) with wood screws (and construction adhesive), perpendicular to the joists of course. The wood all together is very heavy.

As a quick test, I held the plank up to the ceiling and checked for a known joist with the Zircon 740 - and NO reading, it is too dense I suppose ?

So, started marking the drywall with the center stud finder looks like this so far (not too good): 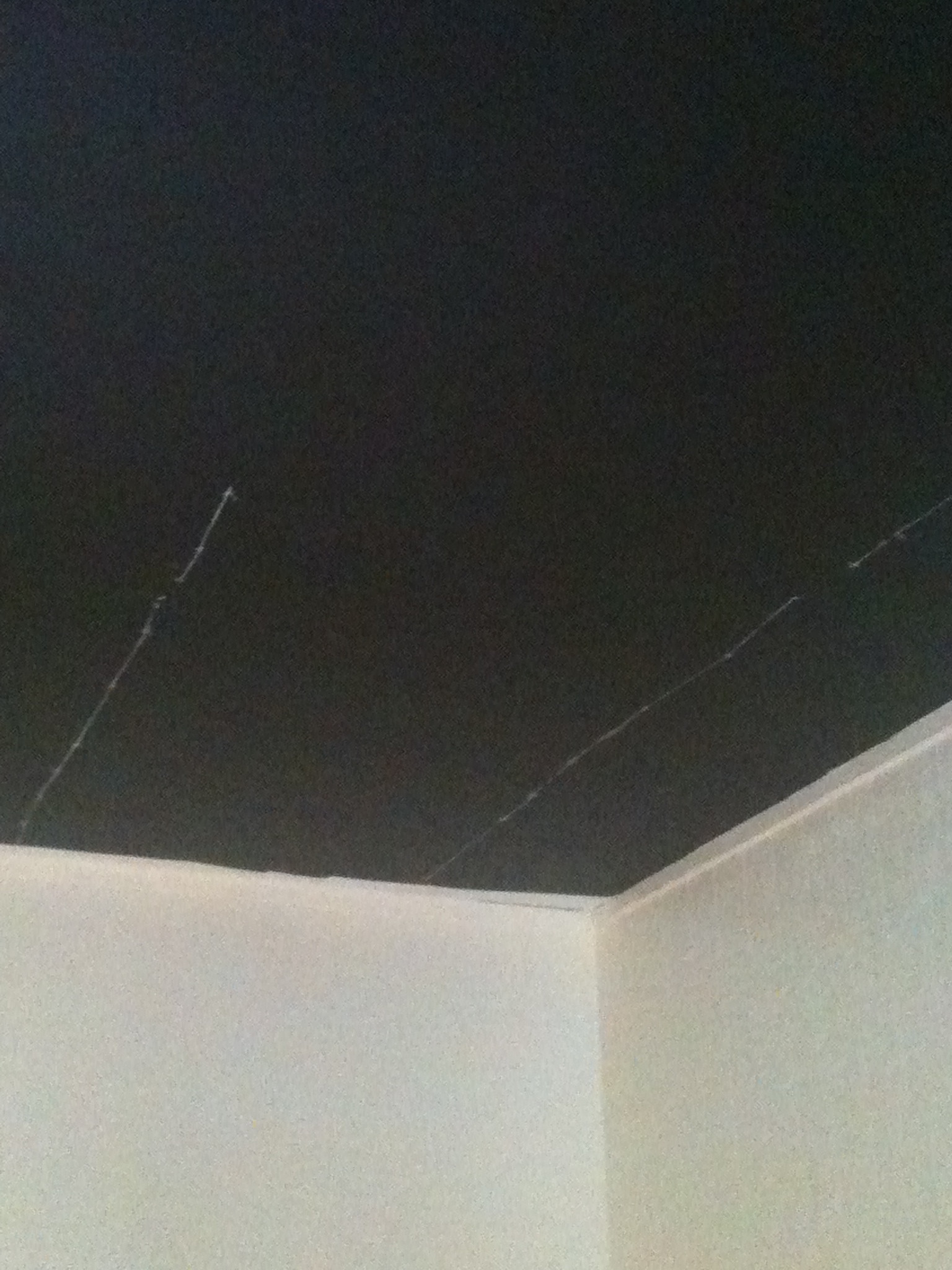 Next, when I place the 6 inch wood plank on the ceiling to attach it, it will obviously cover the line made for those 6 inches, so I will have to "project" where the line is for each plank as it goes up.

Between these two issues, I have less confidence that I will be drilling into the ceiling joist.

Given the situation and plank install - is there a way to confirm I have actually screwed the wood plank into the joist?

I suggest you keep marking the centers like you've done and as each plank goes up, copy that mark to the face of the plank.

You can use painter's tape if you don't want to make marks on the planks. At minimum mark the entry and exit points of the projection of the joist across the face of the plank and make a line between them (a first order approximation). You'll hit a joist most of the time. If you want to be able to better detect a joist hit, then pre-drill holes in the planks or use partially threaded wood screws with a shank longer than your plank depth.

You may not hit a joist every time, but I really doubt that you actually need to. The screws are primarily going to hold the planks in place while the glue sets.

Concerning the weight: You're adding 1.5 lbs. per square foot.

You're adding about 12.2 cubic feet of wood to the ceiling (15'×13'×0.75"). You say it's barnwood, so I would assume something like western cedar. That's 23 lbs/ft­³ (plug in a different value from here if it's not right). So you're adding a total about 280 lbs of wood plus screws/glue. Say 300 lbs. It sounds like a lot, but it's spread over the entire ceiling which is 195 square feet. That's about 1.5 lbs. per square foot, which is approximately the same weight as the drywall itself. I'd be surprised if doubling the drywall was enough to make the ceiling collapse, but I'm an electrical engineer, not an architect; so I could easily be wrong about that. Do check with a local contractor/inspector if you're concerned about it.

There's no good reason that your stud sensor shouldn't work (try a new battery and be sure your technique is correct), but you can simply use a hammer and nail or a drill with a small bit to conclusively locate your trusses. Do checks every 4 feet or so by one of those means and move on with your day.

I think you might consider nailing or screwing furring strips to the ceiling and then nailing the planks to the furring. See this. Screwing each plank would be very tedious and since the screw heads would show you would want to get them in straight line. This would be very hard to do.

A pneumatic nailer is so easy to use and if the planks are nailed into the furring with 18 ga brad nails (~1.5 inch long) the heads would not show and might not have to be filled.

When I started commenting and answering I forgot that these are 3/4" barn planks and so would be very, very heavy. Are you sure the truss system can take this weight? I think you ought to get an engineering opinion on this. You don't want the whole thing to come down. If you have got to have barn planks, maybe they should be on a wall. For the ceiling you could use pressed 'tin' squares.

Not the answer you're looking for? Browse other questions tagged ceiling framing or ask your own question.

1
Wood Cladding Construction Technique
5
Supporting a fan in second (fake) ceiling
2
Can we safely hang a ceiling fan from our vaulted livingroom ceiling?
0
Non-contact voltage tester can't find cause
0
Running cables for a home theater: inside walls and ceilings or on the surface?
1
Can I use a wood top plate on top of a steel track to build a roof-bearing steel frame?
2
Short joist not continuing through kitchen soffit foiling remodel plans
2
How might I attach pieces of lumber between two garage ceiling joists for the larger goal of mounting a punching bag to the lumber?