How to add a plug socket in a specific scenario

Not sure if there are any UK electricians on here, or how similar the electrical industry is to the American system, but here it goes...

I recently moved into a flat in London. A combination of being inquisitive and being too broke to pay for an electrician has prompted me to try and install a new plug socket (outlet?) within a wall in a cupboard. The person inducting me into the new flat pointed to a plate with no interface (just a flat plastic panel with screws) and said "if you want to add a socket in this utility cupboard, that would be the place to do it".

Here is a quick illustration I did of what he was pointing at:

The plate without an interface was the one he pointed at, but the ventilator switch becomes part of the story.

So I went about unscrewing the plate and taking a look at what is underneath it. I thought it might be a simple case of buying a socket to replace the blank plate, and fixing some obvious wires to it.

The white flex cable travels north up the wall - and I presume it is the ventilator - but it has a fourth flex core (black) going into the connecting strip. On close inspection of the setup, it all got a bit confusing.

I have drawn a very accurate illustration of the setup (note all the wires are going exactly where they are going in real life). I decided to illustrate it (rather than take a picture) because a photograph cannot describe the complex setup. Note that blue is neutral, brown is live and yellow is earth. I have no idea what the black cable on the 5-core flex is; or what it is doing. 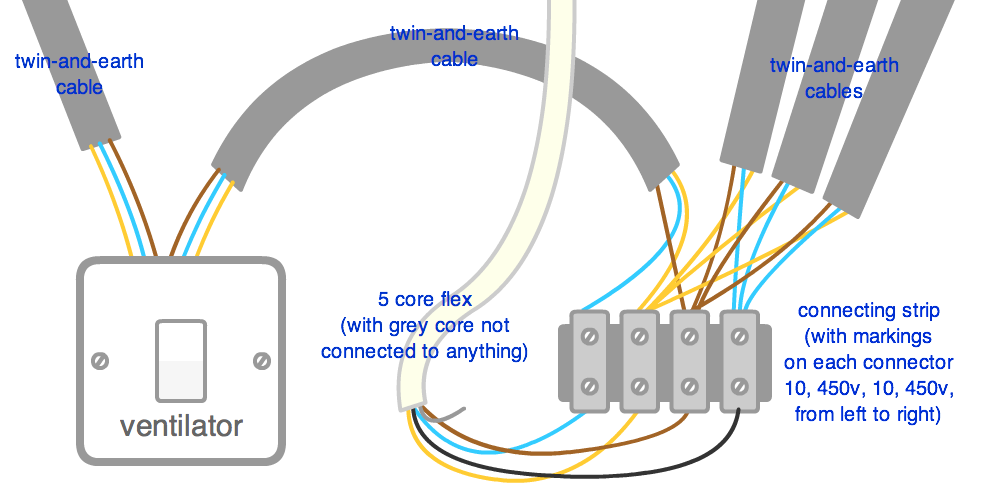 Can anyone make sense of this setup? Where would be the best place to put a plug socket (outlet) and would I need to reconfigure anything to do so?

Any help would be super appreciated. Thanks in advance.

Although I'm very curious as to exactly what is going on here, in answer to your real question:

Not the answer you're looking for? Browse other questions tagged electrical receptacle ventilation or ask your own question.

4
Installing a ceiling fan into a socket with 3 wires jammed into the socket
1
Why do I have 5 wire in my wall socket?
1
Ceiling rose with twin wire, no earth?
0
Why isn't my telephone socket working fully after installation?
1
UK - low voltage from mains cable?
0
How to wire LED light to old wiring layout
4
Baseboard socket plug replacement
0
Electrical outlet arcs only for non polarized grounded plug
1
How do I replace a generator's 4 pin socket with a 3 pin socket?