Does a drill press or a hammer drill have more torque?

I've recently bought this hammer drill for the purpose of getting a drill press holder. I like my tools modular.

I was about to get above type of drill press, when I checked my options for an actual drill press

I was expecting much significantly better specs:
both nearly the same top speed -- 3000 rpm for my drill and 2900 rpm for the latter. both has 12 speeds, but mine has a handling of 7A, while the latter is 3.85A.

To me, at least torque is more important than speed and neither shows it explicitly.

If torque is your objective, the drill press is going to provide more. It appears to use the same gearing as my quite-old Sears Craftsman drill press in that one releases a sliding motor mount, pulling the motor forward. Re-position the drive belts to a different pair of stepped pulleys for ratio change, then re-tension by pushing the motor aft and tightening the clamps/levers/bolts.

Any time you reduce speed by a gearing change, torque is increased. The hammer drill likely uses some form of electronic speed change, pulse width modulation, for example. As such, the amount of power transmitted is reduced for a specific period of time. Reduced (electrical) power, reduced torque.

One can bog down a variable speed hand drill by running it at a low enough rpm. It is nearly impossible to do so with a belt drive drill press, if one had one geared low enough to match.

I see that your hammer drill is not 12 speeds, but fully variable across the speed range, by the way.

Each tool choice is a compromise of sorts. The drill press will provide a stable surface on which to place parts and provide for greater accuracy with respect to squareness and precision. It's not going to be something to drag out to the backyard or driveway for an assembly project, however.

The hand drill has portability and light weight, but lacks precision and stability. A hole saw bit in a drill press is a good combination for comparison. Put the same hole saw into a hand drill and you won't get quite as smooth a hole and if the saw is large enough, it will be challenging to hang on to.

On the flip side, you won't be using a drill press to prepare concrete for anchors, as you can with the hammer drill.

Why not buy both?

If you are doing any kind of precision drilling, you would want to avoid using this style of drill press. These were much more common back in the old days when drill presses were very expensive. In todays dollars, they were probably well over $1000. You can get a decent tabletop drill press pretty cheaply today. There are plenty of good ones in the $200-300 range; which should be affordable to just about everyone.

The object of having a drill press is the ability to drill holes that are precise. It is difficult to get a drill press holder to hold the hand held drill properly. There are two styles of these that I have seen. One uses the shaft of the drill directly, and the other one uses a flex shaft. Neither of these designs are that great. The one that is direct drive may not be able to hold the drill perpendicular to the table. You would need to use a carpenter's square to check for square. Even if you managed to get it perfect, the drill can slip in the holder and go out of adjustment. Flex shafts are limited to the amount of torque and RPMs they can handle.

Newer style drills really aren't built for this kind of thing. They are oddly shaped, and were only designed to be used in handheld drilling, except for a few specialty drills. Old tools dating back to the 50s and 60s were designed to allow you to attach a wide assortment of accessories. The drill press attachment was only one of them. The cases of the drills were all metal, and could be securely clamped into a fixture without damaging them. In the picture below, the drill and the stand are most likely made by the same manufacturer, and it was designed for this use. As you can see, the drill is attached firmly to the base. 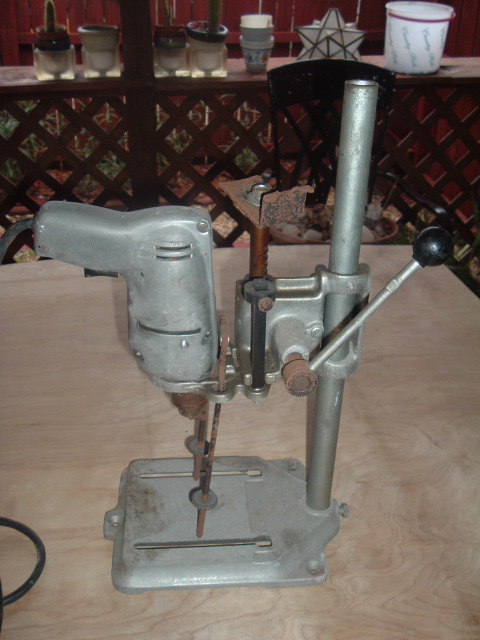 If you can afford it, you are much better off with a drill press.

Not the answer you're looking for? Browse other questions tagged drill powertools electric-motor or ask your own question.

9
How can I drive a screw with an impact drill?
3
How can I calculate the rotational force and motor HP needed to lift a 5lb sheet from a horizontal position to a vertical position from one end?
3
What parameters (torque, speed, impact, impact energy) are more important when drilling into reinforced concrete?
0
Why are corded Drills so different from cordless drills?
0
Can I use an “impact driver for concrete” to drill or drive screws in wood?
2
Why is my blower motor drawing 12 amps on low speed - and can I do better?
3
Old drills randomly starts slow and rattling (if at all)