What is the feasibility of an elevated home extension - versus adding a floor inside a 16-foot high basement?

Following on from my previous question: Can I have two storeys in a 16 foot space?

It looks like the "best" use of that crawlspace area would be to build a new floor inside the 16-foot crawlspace/basement - a large livable/usable finished day-basement room with a somewhat unfinished storage area underneath. But I'm wary of the cost involved in inserting a new floor into the existing house structure.

Another option for adding more square-footage to the house that I'm looking at is extending the top floor of the house by having an elevated extension (on legs/stilts). It would not surprise me if it did end-up costing the same because while more "new" work is needed (i.e. adding new exterior walls) I believe it would be less hassle - "greenfield vs brownfield".

Here's what I'm proposing, via MSPaint: 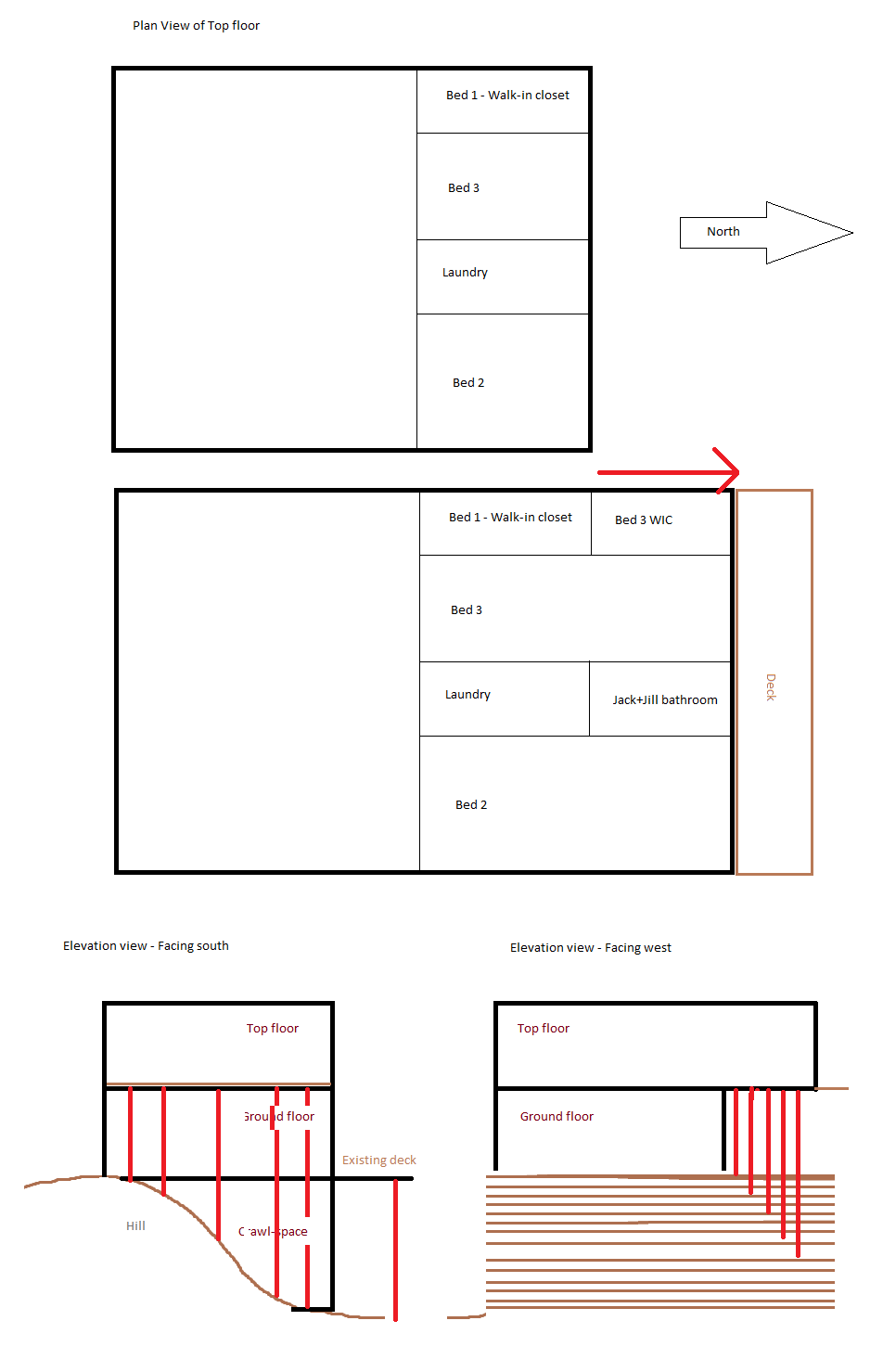 So the top-floor would be extended northwards by about 2-3m, greatly increasing the floor-area of the two bedrooms, as well as adding a walk-in closet for Bedroom 3 and a Jack & Jill shower-room (or two separate shower-rooms). I think adding a deck/balcony that stretches the length of the house would be nice (as the north face of the house faces a wooded area) - it could be covered too, and then the bedrooms would both have their own french-door access to the deck/balcony.

Of course, note the problem is that it's essentially 30-feet from the west-end down to the ground below. I'm assuming a builder can source structural timbers long enough for that.

But an advantage is that the entire foundations don't need to be massively-extended, a set of pile-driven single foundations would be all that's necessary (would you even need a pile-driver?).

Is my proposal feasible? And if so, how much is this likely to cost in comparison to installing a floor into, and finishing, the basement?

Based on your drawing, and the picture from your previous question, your basement/crawl space does not appear to be a good candidate to turn it into living space.

The only thing that basement is really good for is storage. It would not make a good living space because there appears to be a moisture problem there. Any kind of construction material placed down there would get damp and moldy. It also doesn't appear to have many windows, so those would need to be added.

An addition would be a good way to add some additional space. However, that would be very expensive. That is not a DIY job, and it will require you to hire an engineer/architect, general contractor, carpenters, plumbers, roofers, etc. You would also need to have accurate architectural plans drawn up and submitted to the local building inspector just so you can get a building permit. If you are building close to the edge of your property, you may also need to have a survey done to make sure it is set back from the property line far enough.

Unfortunately, it is not like the old days where a home owner can just slap up an addition by themselves. There are a lot of rules and regulations that need to be followed. If you do build without permission, the town or city can force you to demolish the entire addition. Another thing to consider is that you would also have an increased tax liability. When the construction is complete, the tax adjuster will reappraise your home, and the amount of taxes could jump significantly depending on the extent of the renovation.

So the bottom line is how much you are willing to spend to make your home larger. It may be more feasible to make better usage of your existing space, before making the leap.

In an area at risk for a major earthquake, building a house on top of vertical stilts is a bad idea. There would need to substantial reinforcement against shear forces: Think of the X-bracing in newer Seattle skyscrapers, or reinforced walls.

(Sorry for the long reply time)

About 2 years ago I hired a building consultant (the kind that does both architecture and civil engineering) to do an assessment of my house to look at both this upstairs extension and the basement. While my plan for upstairs was was structurally doable I was warned it would be very expensive - and is also contingent on the local planning/construction laws because it's right-up against the north edge of my property parcel line. The company put in a request with my city and county to find out what the building restrictions were and would only do a thorough feasibility assessment if it was legally okay.

When we got the site planning docs back a few days later, we learned that there's a minimum easement of about 10 feet from the parcel-line for normal construction and 3-6 feet from the parcel line for decks/elevated construction and the existing north-side wall of my house is already right up against the 10 foot line - because there's a 1m-wide walkway next to that it means there is literally no room for any building extensions along the north side of my house - even without stilts/supports/columns.

Turns out I can't legally extend my property north, so this question is mooted.

share|improve this answer
answered Feb 17 at 5:06

Not the answer you're looking for? Browse other questions tagged exterior or ask your own question.

1
What is the expense and difficulty of moving an exterior kitchen wall?
1
What is the importance of “breathable” home exteriors?
0
What entities must get involved when building a new home or modifying the exterior of a home?
1
How can I hide an HVAC line on the blank face of house with a chimney?
1
Home Building: Do the first and second floor exterior walls have to line up?