This will come across as a silly question but I cannot open up the hose clamp for my dishwasher's drain tube. I need to unhook/open the tube, clean its head, then reattach. The metal clamp simply won't open, when I use screwdriver, the screw simply won't come out, it just becomes loose in its place but there is no way to take it out. I'm not sure how pliers would help either because I tried pulling the screw out and it didn't work either. 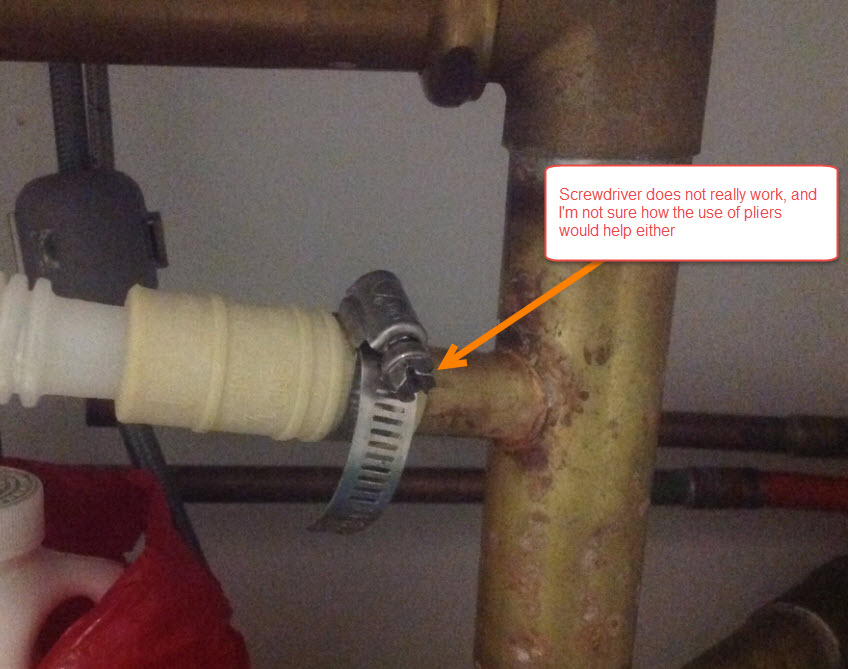 NOTE: I need to use the same hose , so I cannot break this hose. It's FAR beyond my expertise to change the whole tube, I'm just trying to clean the head to open it up. So I need to be able to reattach it.

Thank you very much for your help.

UPDATE: Sorry for my bad wording: I don't need to reuse/keep the clamp, I just need to keep/maintain the tube/hose because changing it requires taking out the whole dishwasher. My dilemma is cutting the clamp without damaging the hose now.

The END SOLUTION: Lots of great answers, comments and suggestions. I ended up actually forcing (force pulling) the tube/hose, and took it out. Once it was out, it was easy to just slip the shot clamp!

Based on other answers and comments, I'm hoping I can provide some help by bringing together some of the relevant information into one answer.

It sounds like the screw is turning, but if something seems seized anywhere, pick up some PB Blaster from your local hardware store. It will help free frozen joints. If you are screwing the worm drive and nothing is happening, then the threads or the band are so rusted out that the threads are not making contact with the band. As such, the only thing holding the clamp together would likely be rust/corrosion. Spray PB Blaster into the housing and let it sit for a while (check can for durations). When you come back, attempt to use pliers/flat head screwdriving to get leverage on the band itself using the slots and simply pull it apart.

I would also second what @gregmac said in his comment. When loosening this, it is highly recommended to use a nut driver (or an appropriately sized socket if it's not 1/4") to loosen this. Between slippage and stripping the screwdriver slot, a nut driver will save you lots of headache. However, when you reattach the existing or a new hose clamp, be careful when using your nut driver because it is very easy to overtighten the clamp, possibly damaging the metal/plastic/copper hose/pipe to which you are clamping.

I'm not entirely clear on why you need to resuse the clamp as you can replace just that part with a part from a local hardware store. In fact, if you are unclear about its operation, I would recommend a trip to your local hardware store and looking at hose clamps in the store and playing around with them so you understand what how it operates under normal conditions. I would recommend replacing this if at all possible to avoid issues if service of the same connection is required in the future. If you need to cut the clamp, there are several ways to do it. If you want to avoid damaging the hose at all possible costs, then a hacksaw through the top of the wormgear housing might be your best bet. Once you've broken through to the worm itself, use a pair of pliers to bend/twist/open up the housing so that the band moves freely (since it will have not resistance against the worm anymore). You could attempt to cut the band, but this has a much higher chance of damaging the hose.

If you get to the point where you need to replace the metal pipe itself, or even any portion of the dishwasher hose, look into using Pex piping. I know it seems scary, but Pex makes plumbing much simpler and with a little research you should be able to replace part or all of the pipe if necessary. The damaged section can be cut back and a piece of PEX can be cut and inserted in the line and secured with a crimp clamp. With a little care, almost any size pipe or hose can be replaced with PEX.

Hose clamps like this are made to clamp, but they are not made to un-clamp so easily - instead, as you have observed, the worm-drive screw tends to un-screw out of its housing when turned anti-clockwise.

The way I loosen the clamp in this situation is to first snug the clamp using the screw - we are not wanting to make the clamp tighter, but simply to get a baseline of the worm-drive screw in its housing. Next, loosen the screw one or two turns, so it is loose, but not falling out of its housing. Finally, and this is why my response is the correct answer, you need to use slip-joint pliers ("water pump pliers", "Channelock pliers") to squeeze the head of the worm-drive screw into its housing, which will have the effect of pushing the clamping band open (instead of pulling it tighter). You will need to repeat this sequence (loosen clamp screw couple of turns, squeeze with pliers) until the clamp is as loose as you like. Note that I have used this method for years on dishwasher hoses such as yours and various hoses under the hoods of my cars and on motorcycles. No chemicals, no hacksaws, just tools & technique. And sincere appreciation to the handyman who showed me this trick when I was a wee lad. :)

One of several things is probably happening:

This type of clamp utilizes a worm gear. You see the slots in the band? The threads of the screw turn into those slots and move the band in or out tightening or loosening it. The screw is stationary. It cannot be removed. It just spins in place pushing or pulling the band.

You need to "loosen" the screw by turning it left. Using a nut driver or a socket wrench is better than a screwdriver. Eventually, the band will expand enough that it can move freely on the hose.

If that doesn't happen, the worm gear system is probably shot. Whether that's the screw or the actually slots in the band. In that case, your only option is to cut the band and replace the clamp. They are very inexpensive.

Edit: If you decide to cut it, you could get by with a hacksaw but it will be a pain. I have added some markings to your picture. I would cut along the red line. Once cut, you can just bend the screw assembly over out of the way and the clamp will release. 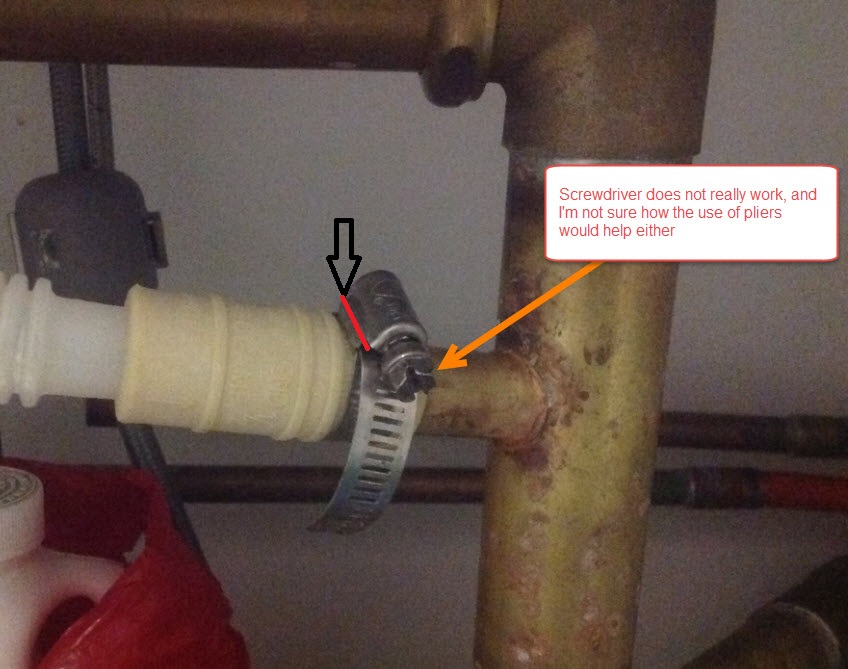 You say that the screw goes "from tight to loose", rather than just spinning without seeming to become tighter or looser, which makes me think that it is engaging the slots in the strap, but the strap is frozen to itself or the hose. If this is true, try loosening the screw as far as it will go, holding the screw housing (not the screw!) still with a pair of pliers, and then tapping the head of the screw with a hammer. That might unstick it.

Use an 5/16" socket wrench. gets best leverage and covers the entire nut for torque.

Not the answer you're looking for? Browse other questions tagged drain dishwasher hose or ask your own question.

2
Dishwasher across from the sink? Way to make the pump stronger?
3
My dishwasher water line is frozen. Can I manually put in hot water in the dishwasher to run it?
1
How can I stop my handheld shower head from leaking?
0
Do I need to winterize 40' underground hose?
1
Dishwasher causes terrible smell in disposal - why?
1
Reliability of a compression barb fitting for a water hose
2
Dishwasher not actually washing dishes, soap left behind
1
Hooking aftermarket drain hose to Frigidaire dishwasher
3
Washing machine drain hose very high