Black and white wires crossed in the ceiling

Replacing a ceiling fixture in a house (1989); removed the old fixture, which worked perfectly fine, but now I see up into the box there are 3 cables to this box that includes two blacks and one white that are pigtailed, as you can see in this short video clip. I am thinking this qualifies as a TAR (That Ain't Right)?

Should I be calling in the big guns, or can I sleep at night with this scenario, if I just connect the new fixture as the old one was installed?

It looks like an inline switch to me, which is usually indicated by a mark on the wire. Are there any black markings (Eg sharpie or electrical tape) on the white wire? You should be able to wire in your fixture to the old wires exactly as is. 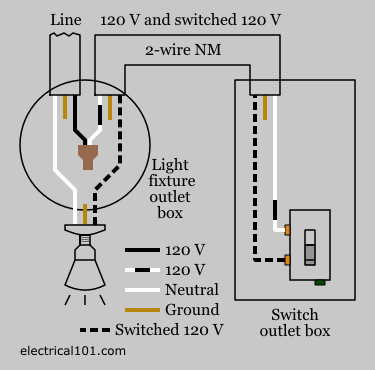 I have a 1950's house Pennsylvania (USA). I have found some strange wiring like you describe.

Undo the wire nut, separate the wires so nothing is shorting or touching, and turn the power back on. Then see what doesn't work.

I have found the often the "extra" wire is feeding power or ground to an outlet or another light. In my cases there was 3 strand wire going to the light from an outlet to the light to another outlet.

The first time I found it I disconnected the light in the garage and found it also feed power to the outlets in the bedroom above.

So you have 3 wire sets here

Just as a general FYI, you normally will have 2 line wires run to switches. So, for instance, it looks like you have a switch on the hot(black) wires. Because the wire in the wall to the switch will have a black and a white wire, you will want to hook the white to the black wires. It sounds backwards, but the logic here is that, when the current comes back through the wire (i.e. you flip the switch), you want to be able to hook it to the right wire (not terribly important for a basic light fixture, but a lot more important for, say, a ceiling fan).

In other words, it would be completely confusing if you pulled the fixture off and found it wired into two white wires. You would have to figure out which was the neutral and which was the switched hot.

Just hook it up as you're thinking. Black to black, white to white and your ground.

Not the answer you're looking for? Browse other questions tagged electrical wiring lighting light-fixture junction or ask your own question.

4
Can I use the white from one switch, but the black from another?
2
Z-Wave outlet wiring - plugging in multiple black/white wires?
1
Query: 2 cables in 1 junction box
2
Replacing receptacles - why are white and black wires crossed?
0
Changing light fixture with red/black UK wiring using only black wires
0
3 black and white wires at light
9
Light fixture wiring - black to black, or white to black?
5
Light box with one black, a two-black-one-red bundle, and a three-white bundle connecting to fixture with one black and one white