We've converted our kitchen to an open plan by tearing out the wall separating kitchen from dining area, so that the sink and dishwasher are now in an island. The wall that I tore out, of course, contained the kitchen sink's vent to the roof. After a good deal of research, I settled on a Studor Mini-Vent AAV under the counter; it's mounted as high as I could manage without scraping the underside of the countertop, so it's 20 inches above the P-trap and about 15 inches above the bottom of the sink. (The minimum requirement is 4 inches; I think I've got that covered!)

The problem is that - with the faucet running full-blast - the sink simply fills up until there's about an inch of water in the bottom; at that point the drain rate catches up to the fill rate, and the sink doesn't fill any further unless it's plugged. If the water is turned off, the sink will drain, but it takes several minutes to empty.

If I unscrew the AAV, the sink drains almost instantly. If I then put my hand over the top of the pipe - sealing it - the sink again fills to about an inch. I've tested the AAV by trying to breathe in through it - there's no noticeable resistance - and breathe out through it - it plugs, as I would expect. As far as I can tell, it's working properly - but it won't let the sink drain.

Random facts that may or may not be pertinent:

As requested, here's a picture of the top of the stack: 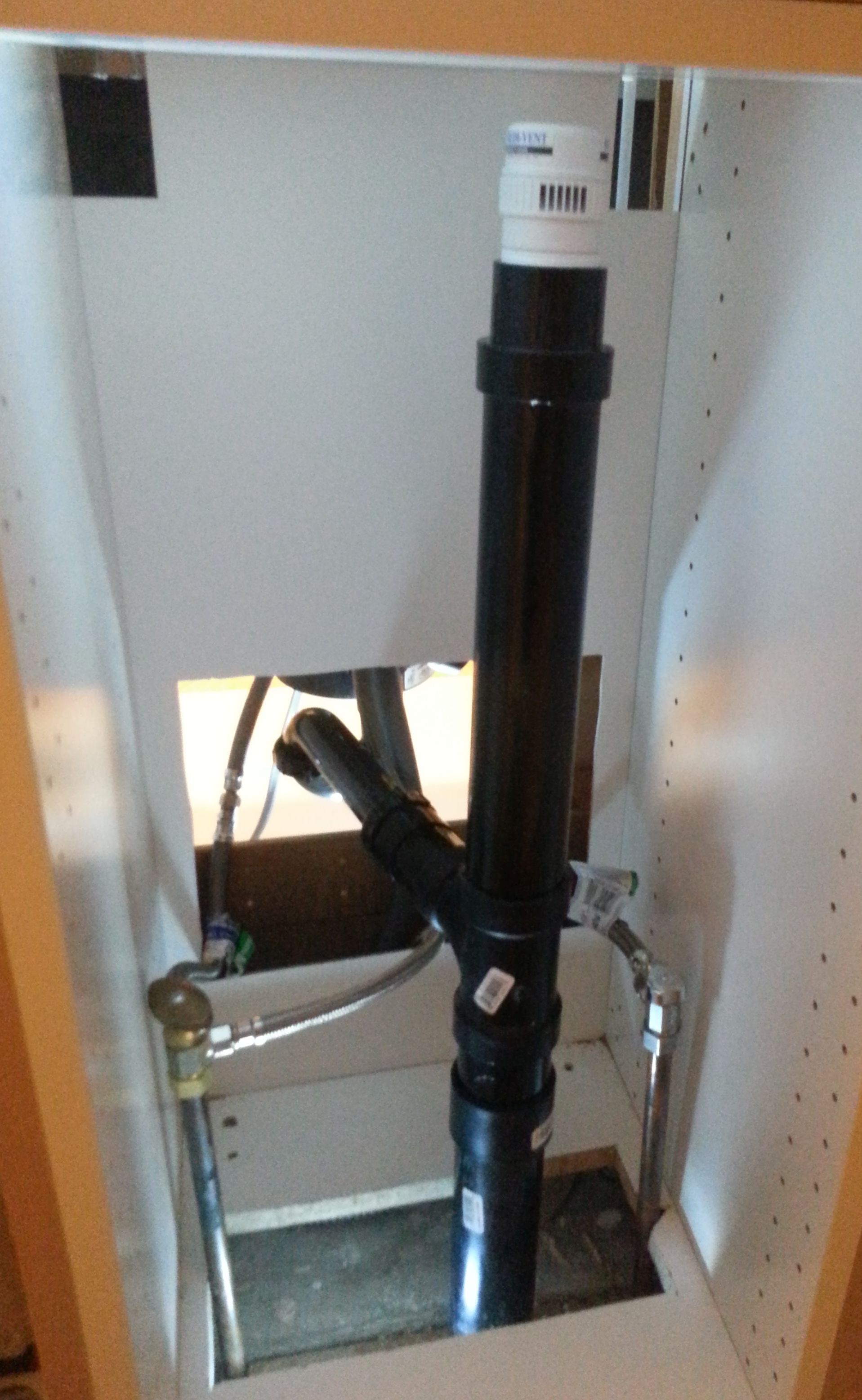 I took pictures of the whole run, from sink to sewer pipe; they're available here if needed for clarity.

How can I get the sink to drain normally?

As suggested, I'm posting the (accidental) resolution as an answer.

Not the answer you're looking for? Browse other questions tagged drain vent island or ask your own question.

4
What would cause a kitchen sink to drain very slowly?
0
water drained from one kitchen sink gushes out over another
1
Help with drain and vent configuration
3
Why is my kitchen island sink gurgling when my dishwasher is draining?
0
Dual kitchen sink disposal causes water to shoot up in non-disposal side, drain connection is horizontal
3
Venting a double kitchen sink (converting from an S trap to a P trap with AAV in a tight space)
3
Kitchen drain causes basement laundry drain pipe to overflow
3
Is this horizontal drain pipe under kitchen sink a problem?