Can I wire a 3 way switch to a light but also have an always-hot receptacle?

I'm trying to hook up an always-hot outlet coming from the 2nd 3-way switch, which that switch controls a light.

I'm thinking if I connect the black wire from the outlet cable to any of the 3 wires in the box (the red traveler, the black traveler, or the black switch leg), then the outlet will always be flipping on or off depending on the switch's state.

As an idea, I'm thinking of splicing the red and black travelers with the black from the outlet cable and that should provide power constantly, but I can't find anyone online doing this. Would this work? Is there a better way?

Due to the way the three way switch is wired, you will not be able to do this. Either, your outlet will turn on and off with the switches, or you would essentially render the switches "Always On" (By connecting both travelers together in the outlet). Regardless, your best option is to run a new line to the outlet. See the diagram below: 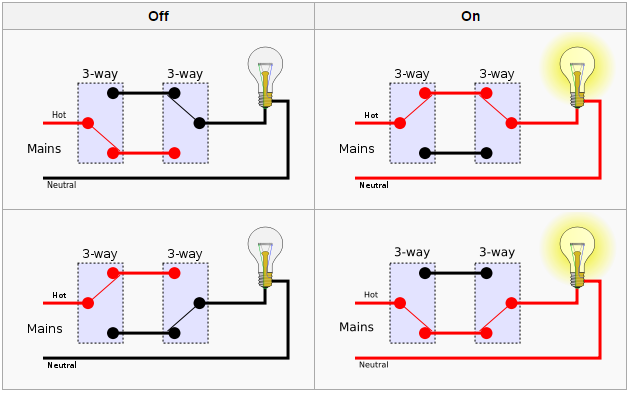 You should be able to daisy chain off a nearby outlet so you don't have to go all the way back to the breaker box. Good Luck!

This isn't as impossible as it sounds -- boy, do relays sure come in handy!

Alright -- I need a bigger box at the 2nd location, to begin with. Plastic boxes don't generally have conduit knockouts, so we'll use a metal box here -- a 4 11/16 by 1 1/2" square box with a 1/2" single gang mud ring will do the job in all cases, or I could use a 4" by 1 1/2" square box with a 1/4" single gang mud ring if I had all 14AWG cables. I'll also need to use NM clamps that clamp the cable on the outside of the box as box fill is critical here. Finally, make sure to leave one side of the box completely open, with one of the 1/2" KOs on the ends pried out to fit the relay I'd then put in as the last step before installing the box into place -- I'd use a Functional Devices RIBU1C (Manufacturer specs) here as it's relatively inexpensive, easy to install and wire, and amply rated for the task at hand, as well as being fully UL listed, which most off-the-shelf relays are not.

I'd then button up the first box (carefully, as it'll be quite stuffed) and move onto the other switch box, which needs a trifle bit of rewiring now to make everything work as intended. The wire to the common terminal of the switch gets removed and hooked to a pigtail which goes to the common terminal, and also is attached to the black wire going to the other switch box, which is also disconnected from the switch. The existing white and ground wires are left intact, and the red wire remains hooked to the switch.

Once everything is buttoned up and turned on -- the first switch should turn on and off the relay, which acts as a stand-in for the first switch, only located remotely off in the 2nd box, freeing up one wire to serve as a hot feed while the other switches the relay on and off.

2
How do I wire a 3-way motion sensor?
2
How should I wire 2 switches that control 1 light and 1 receptacle?
1
Are there "uncommon" 3-way switch wirings?
1
3-way switch wired with jumper between load and traveller
3
How to wire a 3-way dimmer switch in box with three cables
2
How to install a Wemo Three-way light switch in this configuration?
1
3-way switch replacement mystery: can I solve it without a meter?
1
Outlet drop from 3 way Switch that doesn't have incoming power