How do I disable a thermostat to prevent it from turning on the AC?

I need to disable my thermostat from turning on the AC. Yes, covertly. I think one of my housemates is missing his native Antarctica. So, the thermostat still must be active & setable, but I want to disconnect the wire that controls the AC unit. I suppose the first question is: is this possible? If so, how?

The thermostat is a White-Rodgers 1F89-273. The current wiring configuration is:

It's going to be the Yellow wire that calls for cooling (surprised that's an X and not a Y).

Two things to be careful of. First, the O/B is for the heat pump valve (switching the compressor from heating and cooling modes), so I'm not familiar enough with heat pumps to know if activating this valve but not the pump itself could damage anything. I don't see why it would, but it's something to consider.

Second, if you are running an AC when it's below 60F, you run the risk of freezing the coils (literally, the whole thing could be covered in ice if it's running at this temperature). Ice on these parts can cause permanent damage, in addition to being a waste of electricity since air isn't going to pass through a block of ice. If your roommate still thinks this is a good idea, now may be a good time for them to sign a liability waver to cover the cost of replacing the AC if it becomes damaged, and to switch the electric bill into their name.

Rather than messing with the wiring, why not install a locking thermostat cover like this 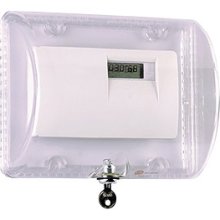 Just don't give your roommate a key, until they can be more responsible.

Not the answer you're looking for? Browse other questions tagged hvac thermostat or ask your own question.

1
Where can I connect the C wire on the A/C side?
2
Converting from a Trane XT500C AC Thermostat to Honeywell TB8220U1003 VisionPro 8000
1
Rth5160d1003 New Thermostat wiring from Older 7 Wire Setup o & b wires?
1
My existing thermostat wiring is a 3 wire cable with three colors: red, white, and green. Green is unused. Can I use it for the common wire?
0
Can I pigtail a "C" common wire to power a Smart Thermostat to the 24v wires coming from the outside AC compressor?