Even heating in home with partial basement

How can I evenly heat a house with a partial basement, as shown in the diagram below? The rooms over the slab are consistently several degrees cooler than the rooms over the basement, particularly when the doors are closed for a while. 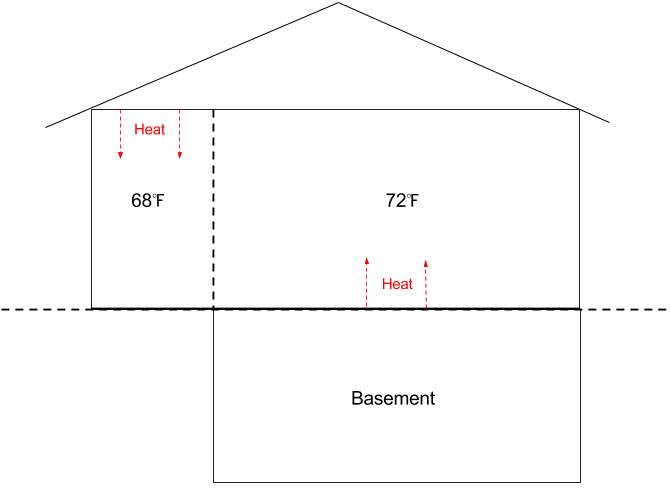 Is the HVAC for this house set up appropriately? What measures would help heat the house evenly?

Hot air rises, so the area with overhead vents are fighting convection. You might install a reversible ceiling fan, a small vent booster fan or an in-line duct fan, at the expense of a bit of electricity and perhaps noise.

My house has the exact same issue. I have what is referred to in the midwest as a California room (no idea why). Room that is slab only with a huge amount of windows.

So the possible issues:

Any or all of the solutions I gave you will work/help. I wouldn't upgrade to a bigger furnace unless my furnace was on its last leg. Wider ducts might be close to impossible or easy too (or maybe not doable until furnace upgrade). The first two things are sealing those ducts and insulating them because this is $50 at most and a long-term investment that will pay off. Reinsulating the room means taking down drywall probably unless you need new siding. So buying an electric fireplace might be one of the easiest things.

Not the answer you're looking for? Browse other questions tagged hvac heating or ask your own question.

1
Optimizing a heating system
1
When should HVAC returns be opened and closed?
1
Is my AC right-sized for my house
2
Best Way to Heat a Split-Level Home
1
Can I move warm air from 2nd floor to basement to help with heating?
1
Can ductless air conditioning+heat pumps work well on floors that have doors closed?
0
Can you heat an entire house with wall-mounted gas heaters?
2
Should I open my AC register in the basement to help with condensation?