Joist re-enforcement instead of sister

So I've got a scenario where I'd like to re-enforce my joists, and I don't currently have the ability or time to sister the entire length of the 12' joists. Now I could remove blocking, insulation, and pipes and sister about 6' of them on the sill side, but that got me thinking:

Would adding "sisters" between the existing blocking actually work well? To me it seems like the small "sister" board would carry any bending/shear forces of the original beam in that area to the blocking. This would then result in either compression forces on the blocking, or rotational forces, both of which seem much more tolerable. It would also result in sharing the load between the joists. Obviously the sister will be glued, clamped, and nailed to the existing joist.

I'm trying to determine the pros/cons of each approach:

A) Sister between blocking, and block the "center" of the sister

B) Sister between blocking, and block the ends of the sister

C) Sister between blocking, and double up the existing blocking 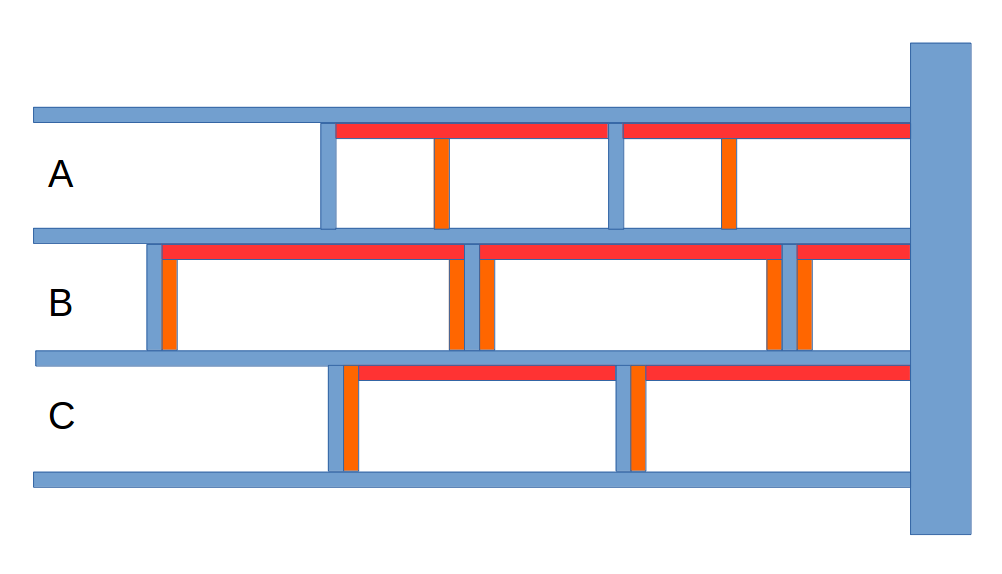 [Edit] Although some comments/answers have been provided I think it would be best to provide some supporting information as to why one way or another might be best.

[Edit 2] I think people are missing the actual question. I do know that the more of a joist you can sister, the better in most situations. I understand that to do this blocking would need to be removed. I also understand people want to suggest things targeted towards a specific problem/solution.

The question however: why the suggested re-enforcement methods will or will not provide any increase in structural integrity. Logic dictates that it will indeed increase the load sharing capabilities from one joist to another and outward to the foundation, and although not quite as strong as an actual continuous sister, it should mimic one as there are no gaps to allow the smaller "sisters" to move in any way. They would simply transfer the forces to the blocking, and then onto the next smaller "sister" on the other side of the blocking.

None of the three options you've shown are likely to add substantial strength or stiffness to your floor. To add either, you'll need a single, continuous additional member to span the majority of the joist length.

The blocking is probably not critical, especially if you're doubling the joists for most of their length. It's typically installed to prevent deflection, and that's not a significant concern where you have doubled joists.

My suggestion would be to remove blocking from every second joist space and double for 80% of the joist's length in those spaces. The remaining blocking will serve to stabilize all joists.

If the original joists are sound (not showing rot), compression is probably not a concern. Even a tub of water doesn't add up to enough weight to compress healthy lumber.

Regarding your comments on the original ideas, you will see some gains if 1) you fit your additional blocking extremely well, and 2) you fasten it all together with screws and construction adhesive. The result will essentially be a load-bridging honeycomb that will improve rigidity and strength. However, the flooring already provides substantial load-sharing, so gains will be minimal.

The primary reason that it's not widely hailed is that it's a very putzy, time-intensive plan that's ultimately inferior to a proper joist sistering. You'll spend more time cutting and fitting all those blocks than you would tearing out half the blocking and slapping new lumber alongside the joists.

Not the answer you're looking for? Browse other questions tagged repair flooring joists blocking or ask your own question.

1
Is it ok to sister a joist to burnt joist?
1
Can I replace a floor joist cross-brace with two horizontal pieces of blocking in the same spot?
0
my house has old warped joists. Is joist blocking safe?
2
Should I reinforce joist connection at the beam where no hangers were used?
10
Do I need a nailing edge around the perimeter of my room for my new AdvanTech subfloor?
1
How to sister joists to level a floor when they've already been sistered to level the ceiling below?
6
How should I repair this floor joist that is too short?
4
How to repair this split ceiling joist?