How do I ensure that I hit studs and not pipes?

I'm mounting a vanity and mirror in a small half bathroom and there's only 1 stud to hit behind my drywall (1990's build). However, this stud seems to be flanked on either side with pipes. To make matters worse, there is another bathroom right above this one so I must assume both the copper pipes and the drain pipe continues straight up.

So my question: how do I hit this stud perfectly and not the pipes, and secondly how do I place drywall anchors on either side of the stud for additional support without hitting the pipes?

Attached are some photos. The magnets are stuck to drywall screws/nails. 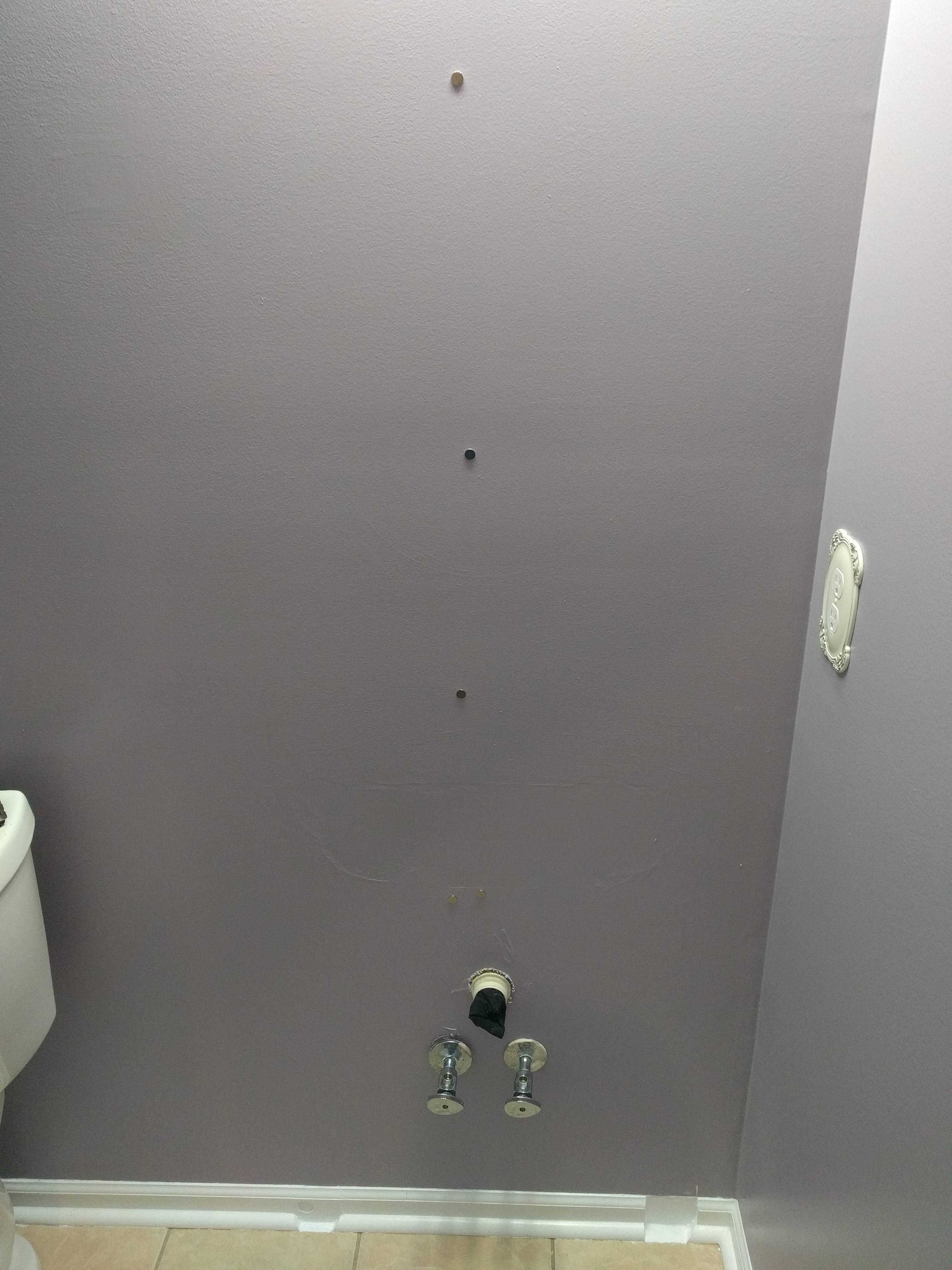 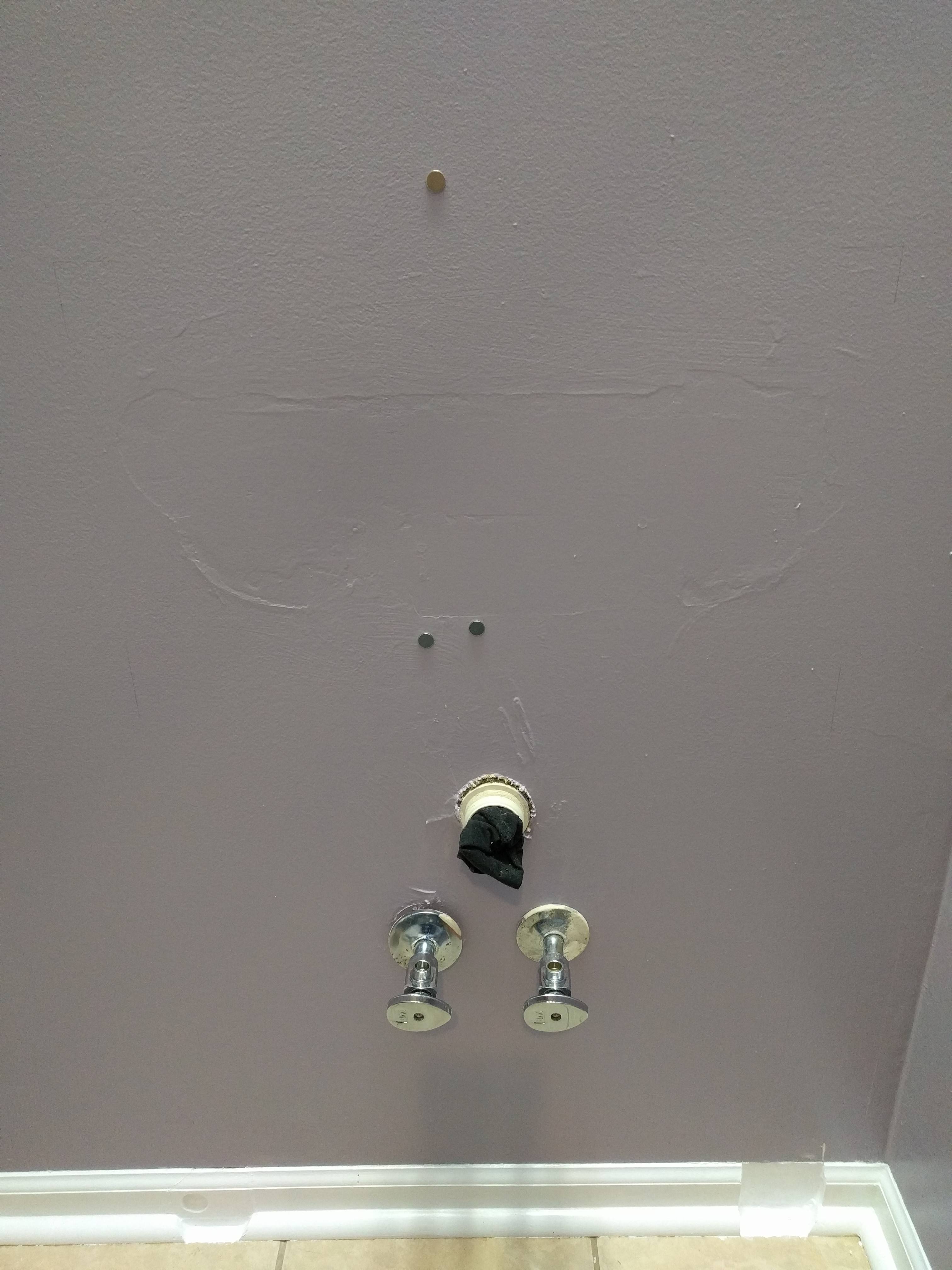 UPDATE: Here's another picture after I've probed into the wall with a metal hanger (those are hard to find these days!) I believe the pin prick my screwdriver is pointing to is the center of the stud as the hole to the left of it just barely graced the left side of wood. But how is that possible with where the drain pipe is below this? I still don't have confidence in what I'm seeing. 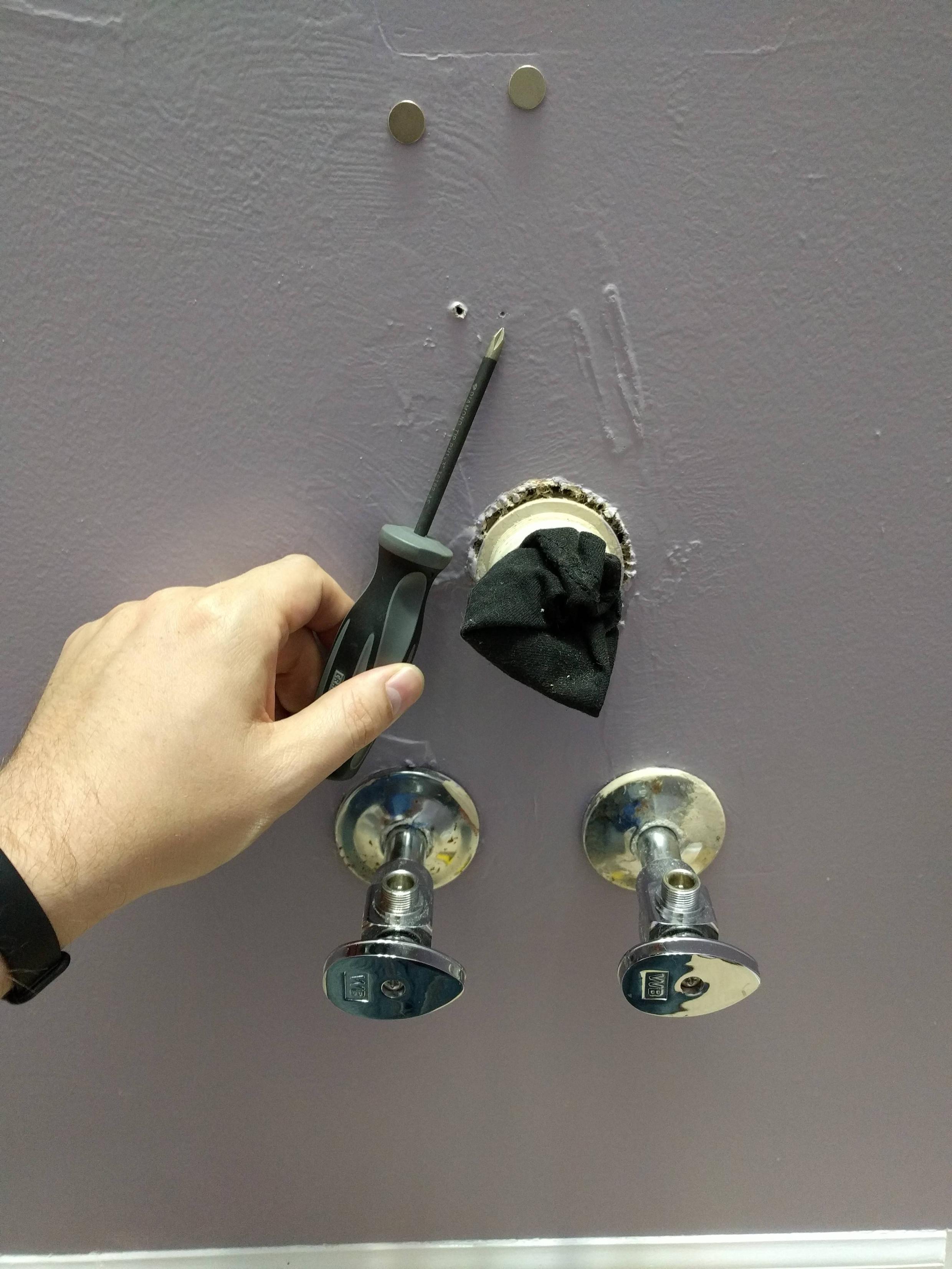 One more photo showing this stud's relation to the only other stud that isn't in one of the corners of the room. 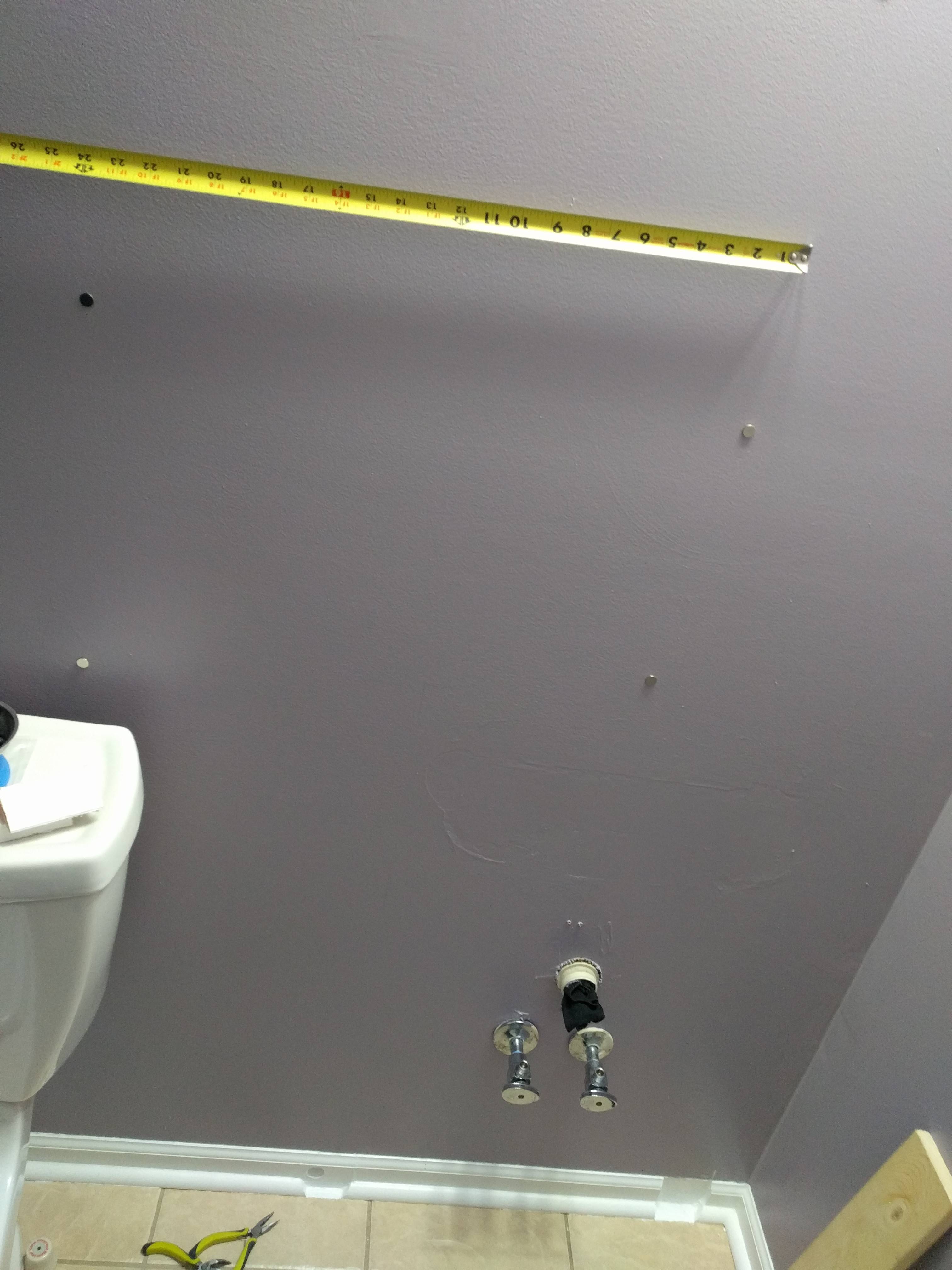 If the mirror is not over 50 lbs or more you can use picture hooks that are rated for 75 lbs that go only into the drywall.

Drywall will hold it, it is not like the wall vibrates or anything like that to make them loose. Besides the nails are set at an angle so it keeps hanging, not able to slide out. 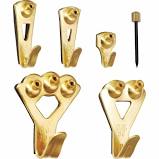 There's no reason to deviate from your plan. Drill carefully through the drywall (put some tape on your drill bit at just over 1/2"), then feel your way from there. If there's a pipe at that location, you'll almost certainly feel a gap first, and even if you don't you should detect plastic or metal, and either should move somewhat when pressed.

If you hit wood, drill slowly and check often. However, code in the 90s required steel protection at any point where pipes were run through studs close to the surface (say within 1"). One of our resident plumbers can confirm this for us.

I'm not a fan of the magnet trick. Use a real stud finder and map out both edges of the stud, in several locations, before you proceed. You want to make sure it does run floor to ceiling, or there may very well be shenanigans going on inside there.

If I had to guess, your pinprick is the somewhere towards the right edge of the stud. And the hot water pipe is attached directly to the left side of the stud, and the drain is attached to the right side (the fitting is larger than the pipe, which will skew your perception). Looks to me like there's exactly 1.5 inches between those two pipes (one stud).

Stick a coat hanger inside the wall through the hole above the drain pipe, and poke around to the left. Feel a stud? Verify that with a stud finder.

You mentioned in a comment that the drain immediately turns to the left, so you might not hit the stud with the coat hanger because you're slipping into a cored hole in the stud. If you can't get magnets to stick all over in the place, then definitely proceed with caution. That means there's either no protection plate or no stud, both of which equals shenanigans.

See if you can find any horizontal studs with a finder (try to figure out what they did to frame around the pipes being in the way of where studs should be). But that's more of an issue for rehab jobs, not in a 90s construction house.

Assuming no shenanigans, I'm relatively confident of my deemed location of the stud, just by looking. Still, I'd do everything aforementioned above.

When using a stud finder, you mark both edges of the stud. Those marks tell you where the middle is.

There may be a horizontal member as it is entirely reasonable to terminate a vertical stud on a horizontal noggin to frame anything that needs to interrupt the vertical line (like the openings in this example http://www.oas.org/pgdm/document/codedraw/images/fig-a-12.gif )

It is likely that a horizontal piece of wood exists behind the original sink location (see imperfections in wall). Gently driving a nail through the wallboard at several locations would verify its presence.

Otherwise, just open the wall and expose the concealed plumbing and structural components. Cut the opening so that the repaired wall would be concealed by the proposed cabinetry.

Not the answer you're looking for? Browse other questions tagged plumbing pipe studs or ask your own question.

4
Is there a shower drain pipe in this picture?
8
What's the proper method for installing new studs in existing frame?
5
How do I make my bathroom pipes more practical?
2
Drilled through one of the biggest walls in my house and hit some sort of black plastic (likely PVC). Did I just drill through a water pipe?
1
Studs cut to fit the sewer pipe -- is it ok?
1
What are these copper pipes and do I need to do anything to them before covering them with a wall?
0
Drilling above laundry, hit something hard
1
What are these pipes sticking out of the ground and foundation wall?