Can I use my old shower pan instead of a mortar base layer?

I am replacing my old leaking mortar shower pan. This article tells me i need to have a mortar base layer. Can I skip demolition and laying down the base layer (the old shower pan will be treated as a base layer), and just start with the shower liner and the mortar top layer? 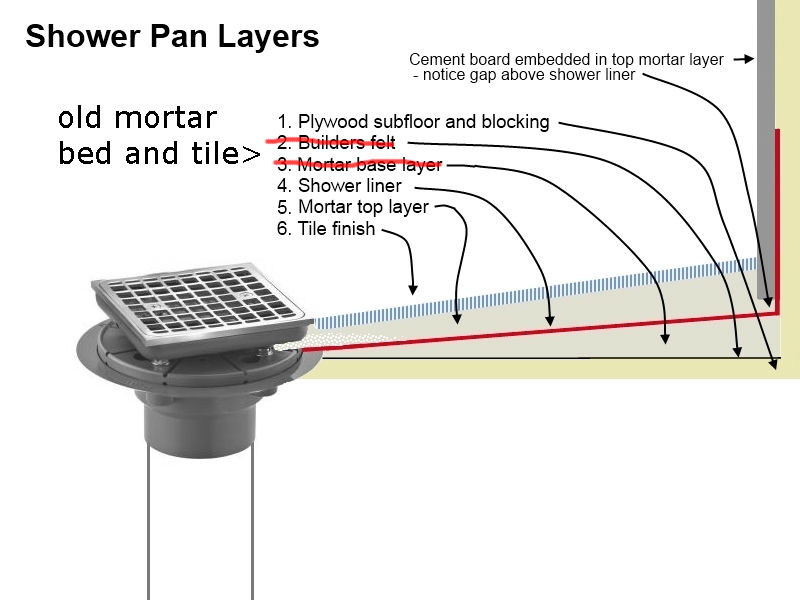 The existing drain assembly terminates at the height of the current shower pan. Your proposal would require a drain extension to the new, higher shower pan. This would require a smaller diameter fitting, inside the old drain, in order to extend the height of the new drain. This would be practically difficult, if at all possible, because of the short lengths of pipe involved unless you're creating a "step-up" shower. By the way, such a fitting violates code by reducing the diameter of the waste pipe (even though just at the shower pan).

To avoid the above, the old shower pan would have to be excavated, at the drain, to allow the old drain assembly to be removed and a larger fitting attached; into which the new drain would be fitted.

Note: raising the height of the shower pan will result in faucet handles and shower heads being lower than they are now.

Not the answer you're looking for? Browse other questions tagged bathroom water shower mortar or ask your own question.

0
Can I support a fiberglass tub with a layer of 1" thick foam board between a concrete subfloor and mortar base?
0
Should I use liquid water proofing membrane over a standard shower mud pan?
1
how thin is the top layer of a mortar shower pan
0
Is it common to build a mortar pan shower with no waterproof membrane?
0
Squeaking Shower Pan
1
Can I use more sand topping mortar to level the slope of a shower pan?
1
Will using Redgard over a cement shower pan cause a mold sandwich if there are weep holes underneath?
2
Can I use Type S mortar for shower mud bed?
0
Use mortar between OSB and old concrete subfloor, in shower?