I've got a swing set (pdf manual) that came with the house. Not sure exactly how old it is, but I'd guess it's 8-10 years old at this point, but could be 12 or 13. One side was severely sunken into the ground, and the lower "deck" was obviously popping up on that one side; the other sides were sunken as well, though not as much. The whole swing set was leaning a bit in one direction. Using a big pry bar, I was able to raise all sides of the swing set and put cinder blocks underneath, as shown below: 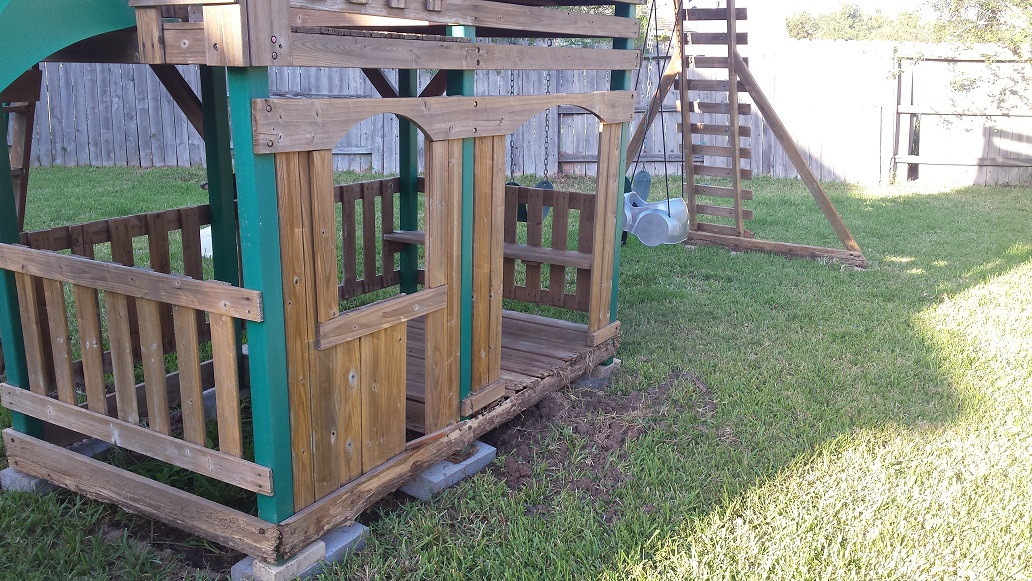 In the above image, the long side showing was approximately 8 inches lower than it is now - the 1x6 across the bottom was completely buried and the lower "deck" was essentially on the ground (or rather, on a giant fire ant mound it turns out). It is rotting away, as can be seen. A close up of the rotting: 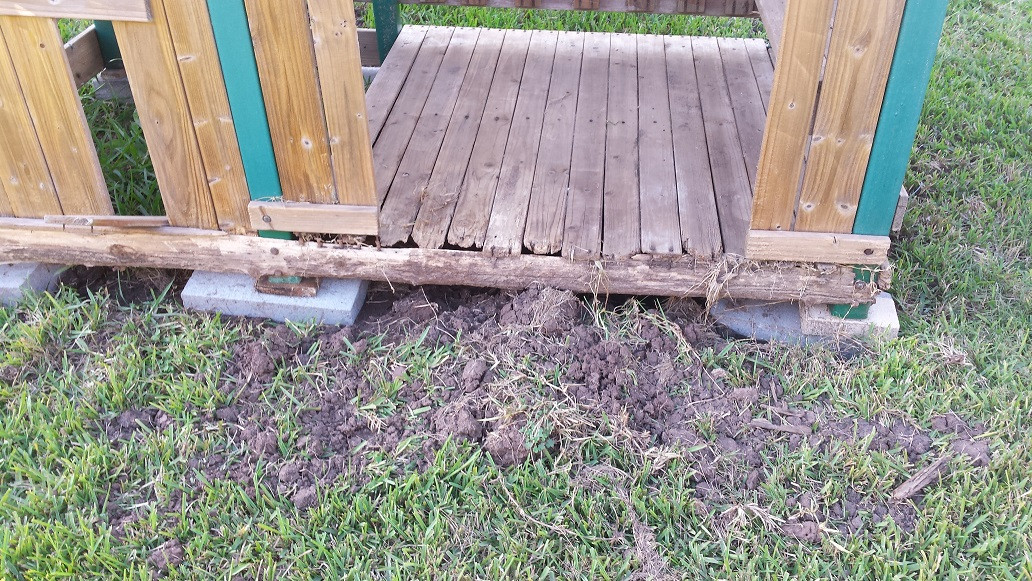 I was thinking this would just be a rather simple job to raise the swing set and put some blocks underneath (far enough under the lower deck to keep them from being a danger while playing). But, given the rot, the swing set needs some refurbishment as well. 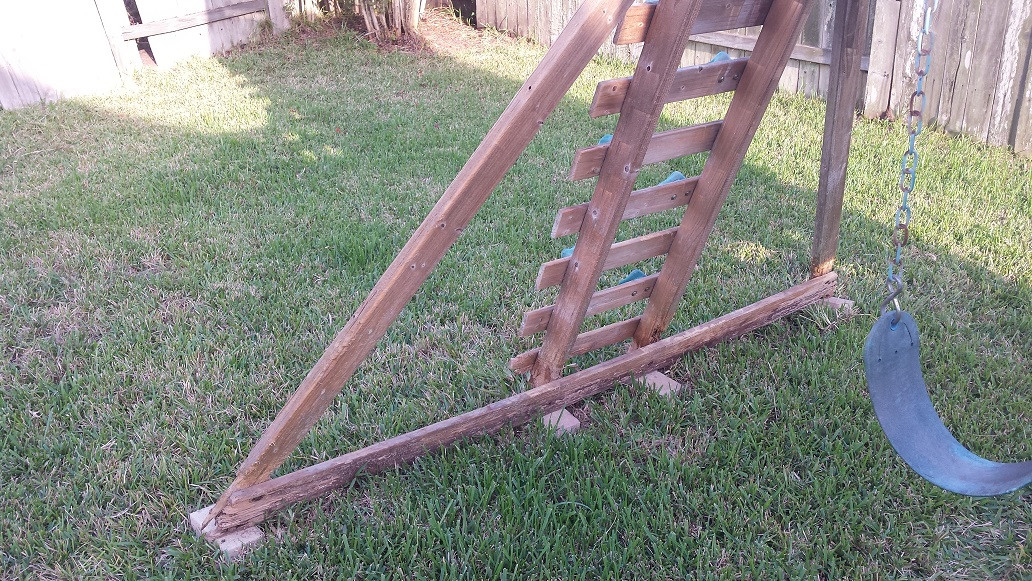 I got some composite decking to replace all 4 of the 1x6 along the bottom, thinking they'd be more rot-resistant than the cedar. I can get 1x cedar boards to replace some (or all) of the lower deck and the vertical pieces under the window. The stairs / ladder next to the slide will likely need to be rebuilt (combination of rot and weedwacker), as well as the ladder and diagonal supports on the other side of the swings (mostly weedwacker).

Given all of that though, I don't want to have to do this again in 5 or 10 years (or subject the next homeowner to it). The manual indicates to just install it on level soil, and that some sinking is expected, but this seems rather excessive. I worry about putting cinder blocks or concrete piers under the metal posts, due to potential injury, but think that would prevent everything from sinking so much.

Finally, given that the ground is not really level anymore, the green vertical posts aren't plumb either. It's certainly much more level than it was, but it's still not actually level.

What's the best way to go about refurbishing this swing set, while at the same time preventing these same issues from occurring again? Or if not preventing, than delaying? I'm in the Houston, TX area, which has mostly clay soil.

It's basically a matter of...

I'd replace the wood with pressure treated or cedar parts. I'd also put the set on blocks, as you've done, and fill in around the blocks with sand, wood chips, or rubber playground material.

You can paint or seal something like this, but you can't really protect all the mated surfaces and fastener holes. This is where the rot occurs most aggressively. Repair it and be happy until it needs more repairs. Repeat.

You may consider building a raised bed full of gravel, it's very easy to level out, you don't have to mow around it, and it promotes drainage.

@isherwood's answer sums up the rest of what I'd suggest. Pressure treated wood is ideal here, and the composite decking should work great (I would look to see if you have to drill the holes oversized and use washers for expansion reasons).

The rest of the structure still looks great.

Not the answer you're looking for? Browse other questions tagged repair outdoor play-structures or ask your own question.

4
What is the best mix for cement render?
4
What is the most durable wood to use for an outdoor swing set
3
How to saw inground lumber
2
How should I repair this poor deck rim joist connection?
14
Is this a stress fracture or natural cedar characteristics on a swing set?
1
2 post swing set strong enough?
0
Swing set strength
3
I'm assembling a swing set, having issues keeping it square
7
Does the quality of fill dirt matter?