Cut wire too short when installing light fixture - now what?

I was trying to install a hanging lamp in the dining room. The wiring was way too long (the wiring was already quite a bit longer than the chain but I had to completely remove the because the ceiling isn't that high) so I measured and cut the wire, but when I then tried to assemble the lamp at the ceiling I realized I hadn't accounted for the face that the wire has to go through a narrow support tube before it comes out behind the ceiling cover. As a result, when the wire comes through the tube it just barely sticks out, not even enough for the exposed wires to clear. If there was maybe 1/2" more wire I think I would have room for the wire connectors to be connected. I'm not sure how I can splice the wires together because the tube isn't much wider than the wires and I don't think a splice would fit into the tube. Plus, the exposed wired being right at the mouth of the tube would seem to make things trickier.

How can I recover from this mistake and finish installing the lamp?

Update: Here is a picture of the fixture: 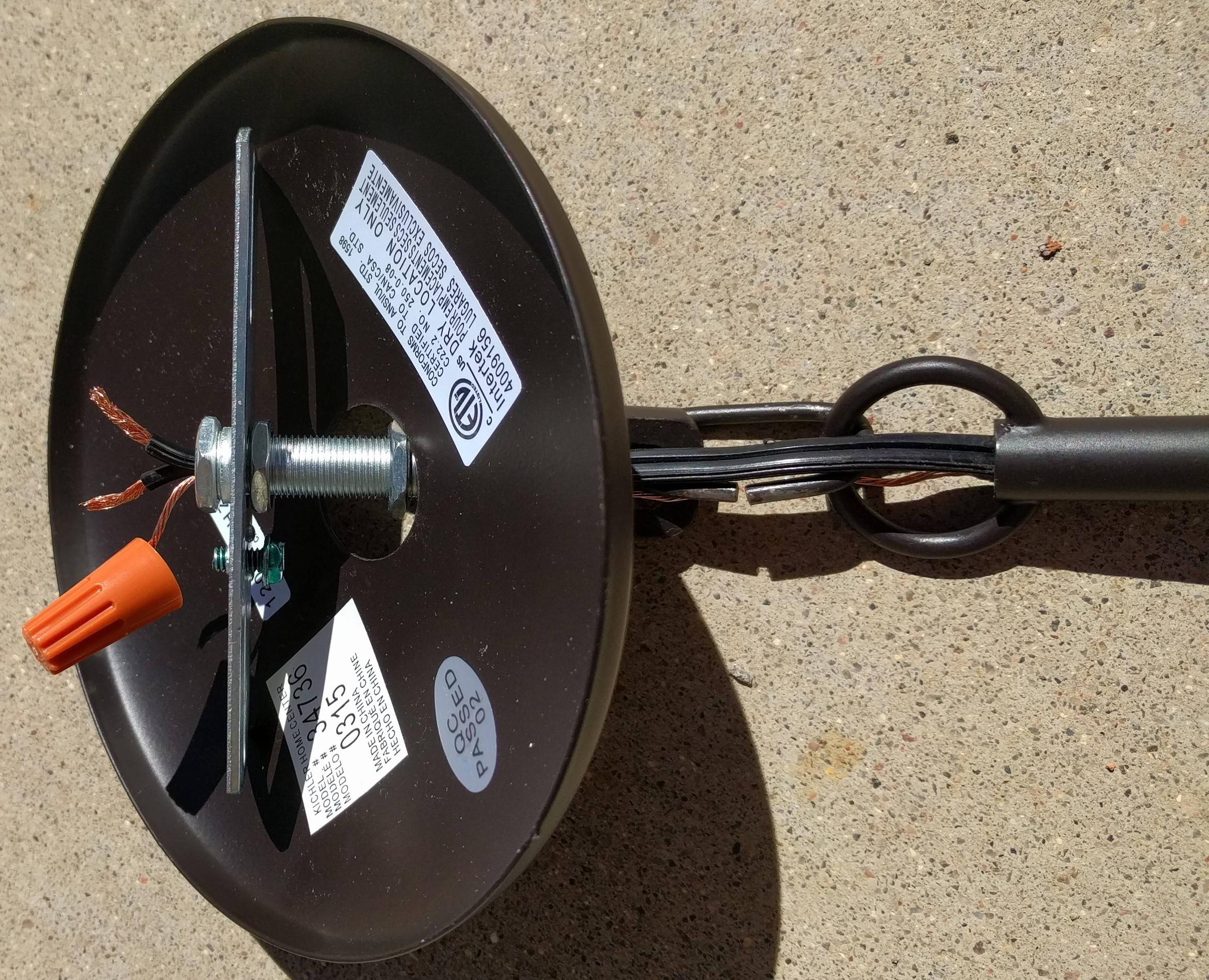 I managed to get a bit more slack and put a wire connector on the ground for reference. The hot and neutral wires could use a bit more exposed wire, but I think it will be usable as is. If there was some way I could shorten the single chain link that could fix the problem, as presently I can wire it up to the ceiling if the link isn't taut (but then the fixture is being supported by the wire, not the link.

Second update: I replaced the link with something shorter and now I have enough slack that I can get the wires to touch, but when I put the connector on and tighten it up, it doesn't bite enough against the lamp wire to hold it. Could I possibly splice it directly in the connector?

Final update: After the last update I was able to get both connectors to tighten up properly, one by itself and the other by twisting a bit of extra wire around both wires first. The lamp comes on and doesn't have any flickering or other malfunctioning, so I think we are good.

Judging by the photo, you can probably remove the chain link from the fixture and replace it with a smaller one (to add maybe 1cm (1/2") to the length), you'll then want to wirenut on an additional length of wire that you would attach in the box.

Alternatively, you may still be able to return the light to the store if they're nice enough.

Since we can't see the whole fixture, it's hard to make a proper suggestion... but I'm willing to bet you can just replace the wire with a longer one.

Not the answer you're looking for? Browse other questions tagged wiring light-fixture or ask your own question.

6
How to properly wire a ceiling light fixture?
6
Can I safely ground a light fixture if the ceiling box has two hot and one neutral wire (no ground wire)
1
Did I wire my light fixture correctly?
0
Power wires too short, what to do?
3
Ground wire blew off new light fixture
2
What is a safe way to ground this light fixture?
3
How do I add a pigtailed receptacle to an existing, continuously wired set up?