I'm opening up a wall between two living rooms. The wall use to be an exterior wall which runs east to west and used to have a large window which was closed up when they added the back living room. The joist also run east to west and end on a center wall and an exterior wall that run north to south.There is currently a 4x6 that ran above the old window. I've attached photo so I hope that helps. Any info on beam size or material would help. I do want to do an exposed wood design so the beam and posts won't be behind a wall.

Thanks for any info you can give me.

This is the edited one. 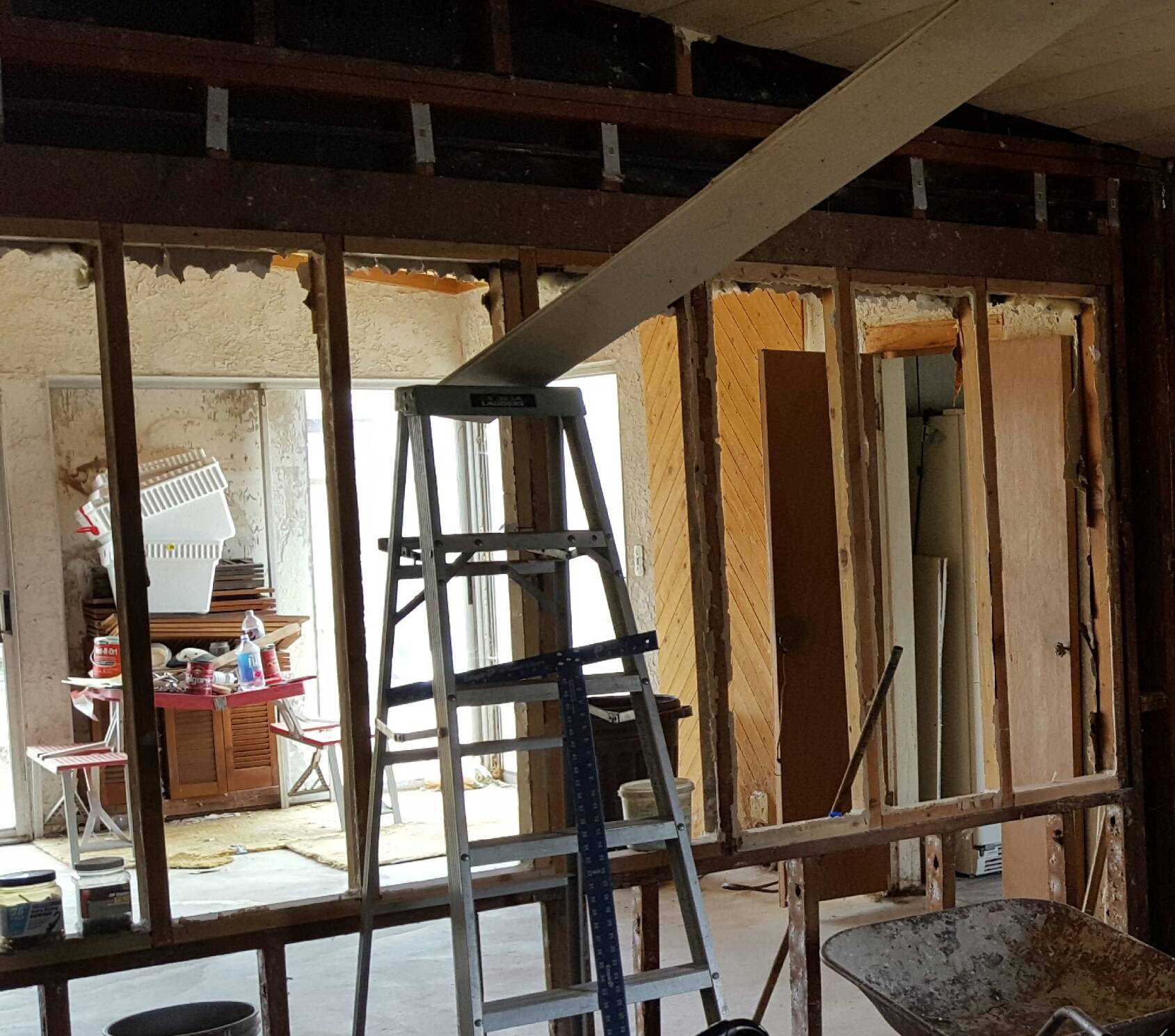 No. 6-by lumber hasn't been used for beams since the 60s or so (and it doesn't fit in your wall anyway). An engineer would specify something between a doubled 2x10 and a doubled 1-3/4" LVL (engineered lumber) beam, up to 12" nominal height, depending on the roof system.

If I was held to the fire for a guess I'd put in a doubled 2x12 in a U configuration with a flat 2x4 on the bottom. The primary factor is whether you have a full-span engineered truss system or a conventional ceiling joist configuration where they'll be carried by the beam.

Simply put, we can't say for sure from our desks what you need, but I can say that a 6x6 isn't it. They're for posts, not beams.

Also be aware that it's not uncommon for beams that long to have twin trimmers at each end. You may also need to block through the floor system to the wall or beam below as well, to prevent overstressing the subfloor at those concentrated load points.

From the new photo it looks like that wall was open at one point already. The key question is whether the opening spanned the entire width of the header. Sometimes single headers are used with intermediate trimmers acting as posts.

I'd still remove everything up to the double top wall plates and install a double 2x12 header immediately below that, replacing the 2x6 header and resting on the existing trimmers.

Disclaimer: I'm making a number of assumptions here that aren't supported by adequate knowledge of your building. You should be consulting a local engineer, not a bunch of strangers on the interwebs. Take my advice solely as a presumed plan of action to be verified before completion.

To answer you question, no a 6X6 will not carry that span, even if you have only a roof to support. The strength is in the height of the beam, not so much for the width.

In my opinion I would first reroute the pipe going through the cripples over the original header, under the top plates. After that is out of the way, then you can place the proper sized header to carry what you need.

What I did when I needed an engineer to help, I knew I was going to use LVLs so what I also knew was that the local building inspectors went by the say so of the specs given by the engineers of the company that produced the LVLs. The engineer sent me through email, a signed letter stating that such and such LVL will support my design criteria. I told him the span I needed to cover to the inch, the span of the ceiling joists on either side of the proposed beam the ceiling material, whether the attic was to be used for storage or not, which by code, that I am aware of, depends on the height of the attic or whether there is a floor present. If yours is supporting a roof load, he will need to know your area so the snow load if applicable, can be calculated in too.

So after all that and you get your beam in and it's supported properly, and since you are willing to show a 6X6 beam, dress the LVLs in a fashion that will mimic what you want in the way of a finish. It will be taller than 6", that will be the way it is, no getting around that. Of course with a little finesse you could wrap it in 1X6 on three sides and drywall the rest to the ceiling.

Not the answer you're looking for? Browse other questions tagged remodeling beam or ask your own question.

1
Is a sandwiched beam made out of 2x4s laid flat a suitable for a 15' span that doesn't carry a load?
1
Can I frame over an existing deck with a new deck to raise the level?
0
Can a 2x6 beam span 11ft?
3
What size beam should be used for a 15' patio cover span?
1
Weight distribution in load bearing wall?
0
LVL Span Ratings and Beam Placement
0
How to finish concrete ceiling - beam span calculation
0
4x6 wood swingset beam, single span, center load max lbs?