How can I correct the slope of a marble shower sill?

Our master shower is tiled in marble; it's almost perfect except... the sill has a slight slope running out of the shower instead of into it. As a result, every time we take a shower, a small amount of water runs out and down the front face of the sill, and (if not wiped up promptly) soaks into the floor.

The glass door (which swings in and out) is centered on the sill, and has a plastic deflector at the bottom, so the amount of water is not huge; it's on the order of a teaspoon to a tablespoon each shower. Still, it's enough to have destroyed the molding and required the replacement of a few floorboards, and the replacements are already showing damage. 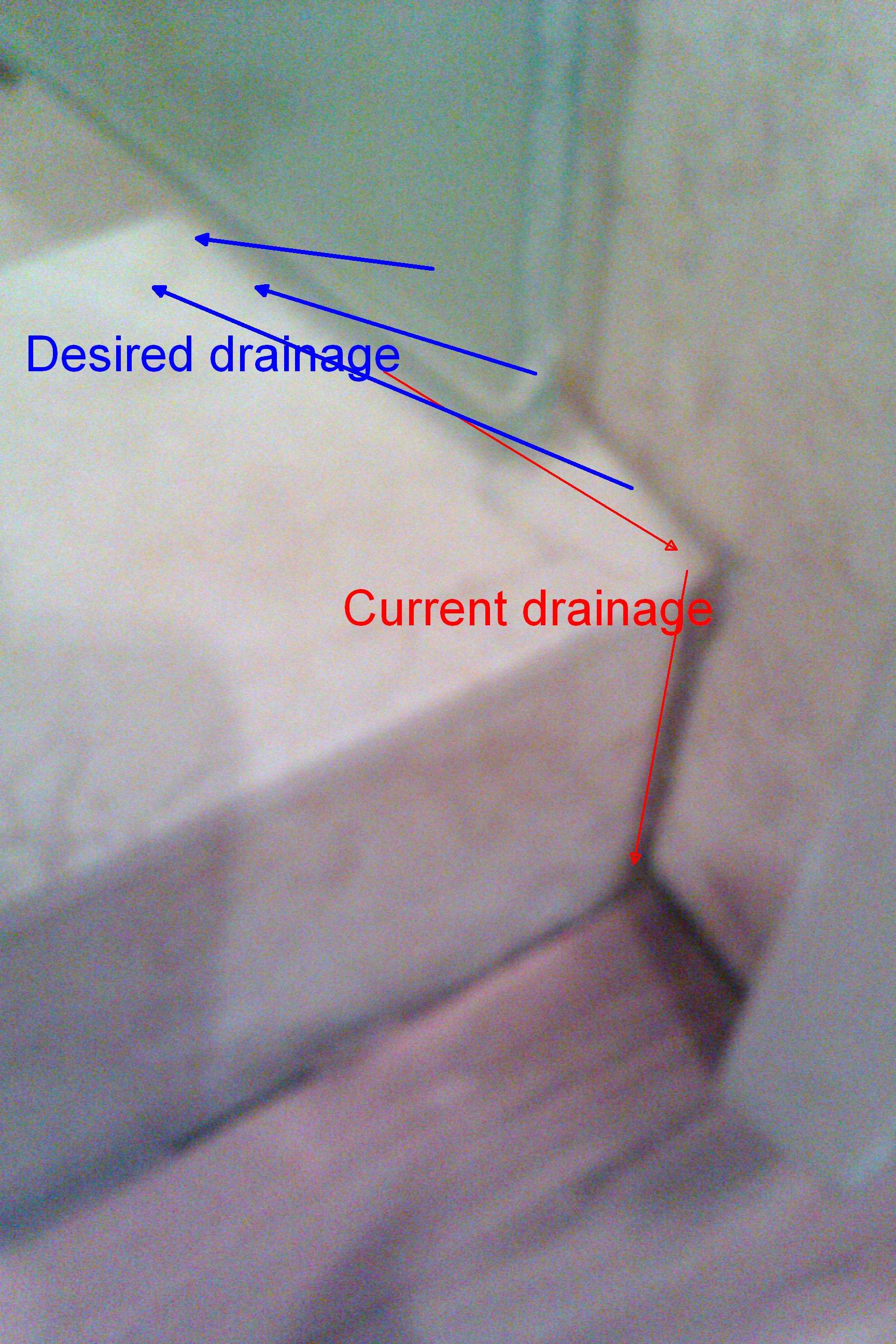 I'd like to reverse that slope so that water drains into the shower rather than out of it; I suspect that the best method would involve removing the tiles from the sill and re-seating them. I'm not really up for that, though, so I was thinking more along the lines of polishing the inner edge (very slightly) and building up the outside (very slightly) with some sort of polish or wax. Another idea was to make a small dam of transparent/"invisible" silicone caulk in a line just under where the door hangs when it's closed; my concern with that approach is that 1) invisible caulk really isn't; 2) we would feel it underfoot; 3) it would tend to peel up and need replacing relatively quickly, and until it was replaced it might be worse than the current situation.

Does anyone have experience with a similar situation, and/or suggestions? Thanks!

Edit: It's a bit embarrassing (it's the sort of thing you'd think I should have noticed long ago), but when I really took a look I realized that the plastic bit at the bottom had disappeared some time back. I'd simply got used to it being gone, and didn't make the connection between its disappearance and the wet-floor problem.

So I went online and found this for $9.00: CRL Co-Extruded Clear Bottom Wipe with Drip Rail for 1/2" Glass - 32-5/8 in long and popped it into place (it's tight enough to not even need glue) - et voilá! the floor, she is wet no more. Didn't need to correct the negative slope at all, although I do want to touch up the corner.

This is a tough one. There is no easy way to remedy your problem. The best way would be to remove and replace the tiles properly. If in fact the tiles are real marble, you can grind them to create the proper angle and slowly refinish the surface by stepping down grits and finally getting to a wet polish grit of 2400. That is actually impracticable for a DIY if you don't have the equipment and materials to do it. If it were me, I'd remove a couple of tiles and reset them to fix your drainage problem. A couple of hacks with a hammer, scrape off some of the thinset, replace the tiles with a little premix thinset, regrout, wait a couple of days, seal the grout and your done. The actual labor time may be only a couple of hours, even though you have to wait a bit to use the shower again.

I'd say shirlock's answer is really the proper way to handle it. If you're looking for a quick fix, perhaps a rubber threshhold seal could be applied with silicon caulk. The key would be to find one that looks not-ugly, which may be the bigger challenge.

Not the answer you're looking for? Browse other questions tagged shower drainage marble sill slope or ask your own question.

2
How to properly caulk a plastic shower?
2
How to fill crack in marble shower sill
4
How to seal between sill plate and foundation wall with wide gap?
1
Shower floor slope
1
How can I extend a shower curtain to close a gap at the floor?
0
How do I remove window sill stop block on double-hung vinyl window?
0
How to protect this foundation sill from elements, rodents?
1
How to keep shower caulk clean
1
How can I properly caulk a vinyl window to a marble sill, inside a shower?