How to support existing above garage-door storage platform?

I recently bought a house that has above the garage-door storage.

This is hanging from the roof, which means that if you look at the house from the street you can see very faint waviness because the 2x6s supporting the roof that the garage hangs from are unsightly. In talking to our home inspector he suggested it wasn't a structural problem but just a "it might be nice to fix" issue. It is 1/2 mounted off another support beam running the length of the garage, only the cantilevered part is hanging from the garage.

Some pictures to better explain 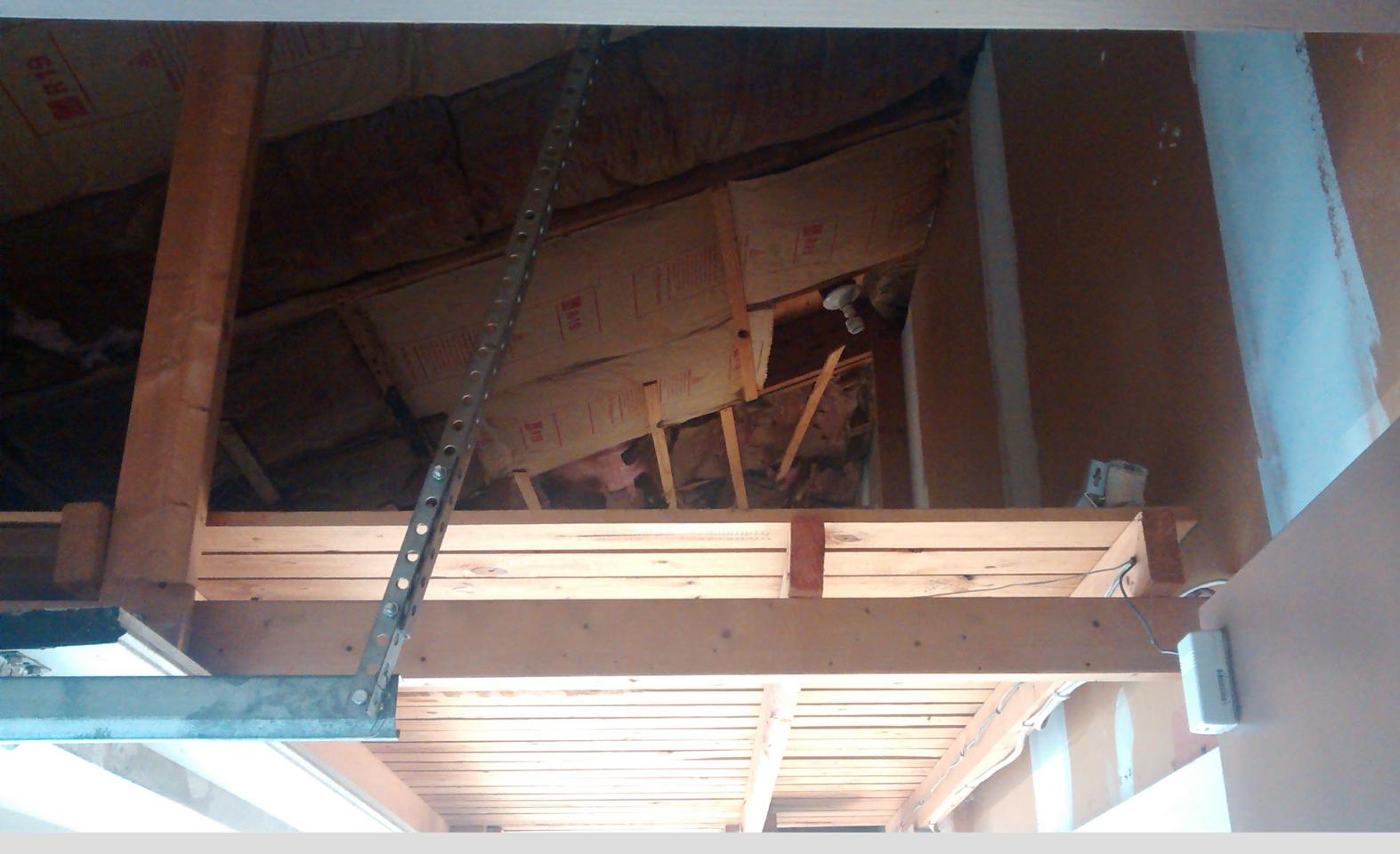 There a total of 6 of these supports, in three groups: 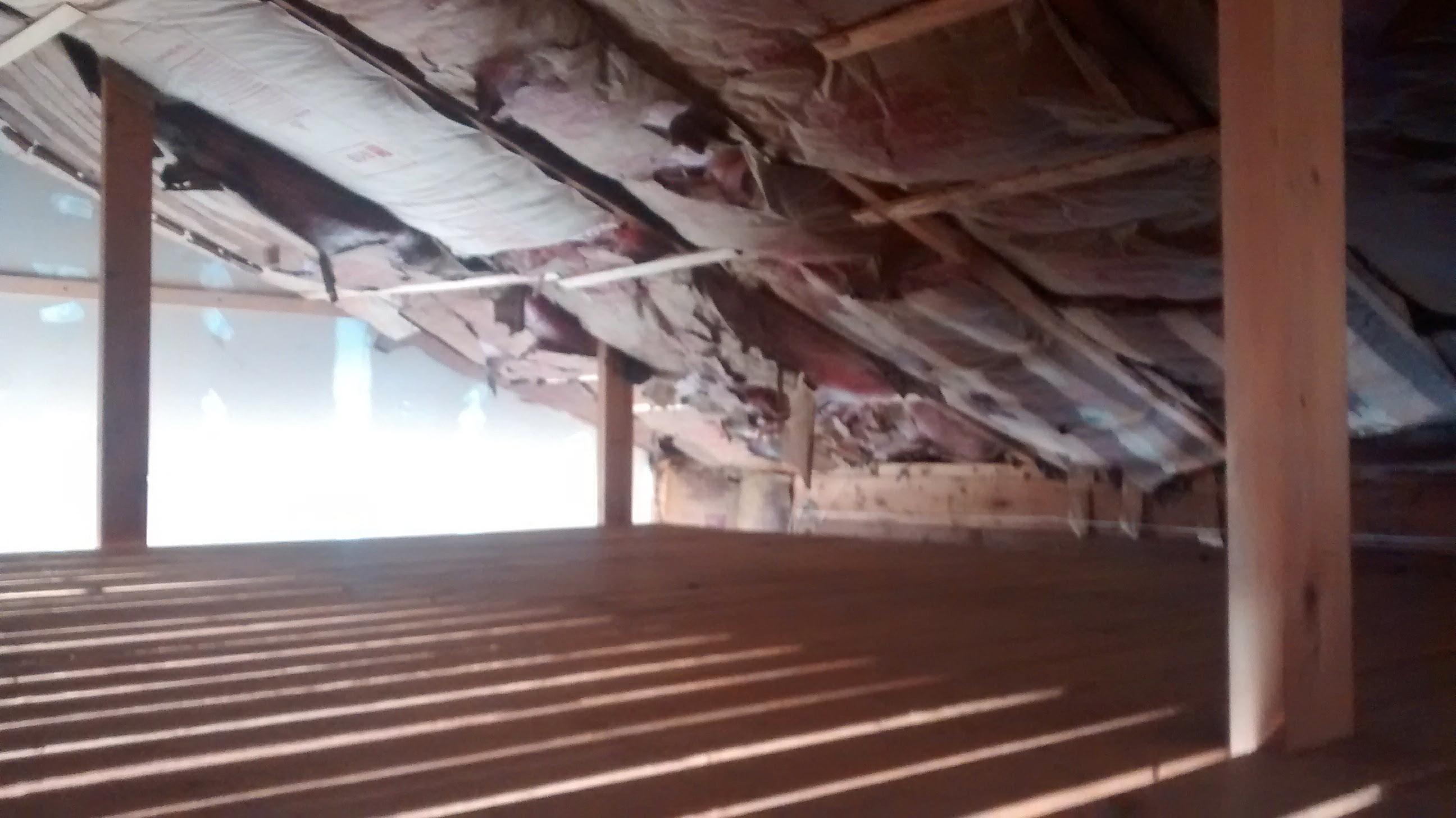 I'd like to better support this. The garage door is awkward, though, because I can't just put a support under the corners of the platform.

Is there a good approach to supporting this? My gut is to run a beam across the edge furthest from the existing support and support this from the floor of the garage. It's about 20 feet across and I'm not sure I can get a solid 20' continuous beam up there without hacking pieces apart, whether disassembling the garage door or taking supports off entirely. I could then fasten the floor up to the beam.

Putting a beam under the platform will give me minimal space (if you look at the first image you can see how close to the bottom of the platform the garage door comes).

I'd guesstimate it only really has to support 500-1000 more pounds than the platform, for storage purposes and supporting the weight of someone being up there.

Any suggestions would be appreciated. Hoping to avoid taking most of it down..

Can you get a laminated beam up under the rafters like a purlin and sit it on 90 degree brackets on the wall either side?

Add new beams parallel to the sagging roof rafters but on the other side from the vertical support studs. Do not attach the new beams to the roof; a little separation is good. In fact, the lower you make these, the easier the remaining construction.

This is remodeling, not new work, so you should take up a strain where the new stud will go. Just pass a come-along strap over the new beam and under the floor beam and tighten it up until you hear the wood creak, just before nailing the vertical stud in place. This keeps the floor from immediately sagging when you remove the old vertical stud.

Now, remove the old drop support studs to relieve the load on the roof rafters. The roof will not spring back into place, but at least the ripple will not increase. You can try shimming between the rafter and the roof cladding if it really bothers you. 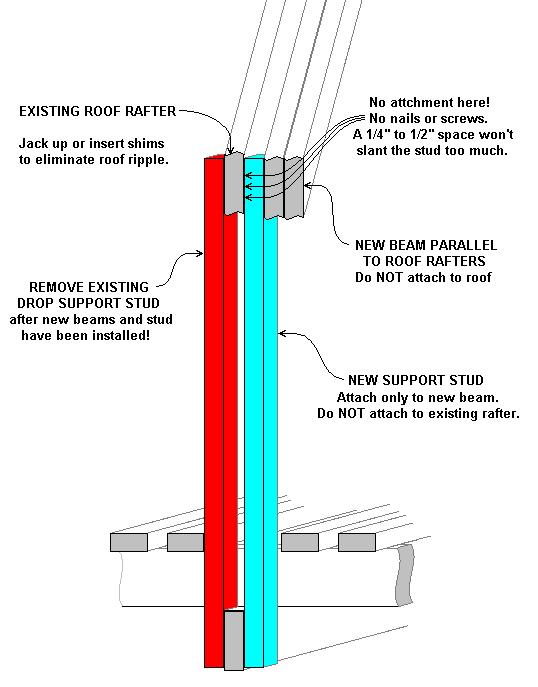 As you can see from the illustration, there is no space to work in when attaching the new stud to the new beam. This requires careful sequencing of the construction.

(1) Add the new beam 2"x6" nearest the new stud location. I can't help you here because I don't know what your rafter ends look like.

(2) Place the vertical stud and fasten it to the beam. I would use 3.75" deck screws driven in from the beam side. Don't fasten the bottom of the stud yet. Do both the long and short studs on the beam.

(3) Add the other new beam 2"x6". Sister it to the first board with the deck screws to make a strong laminated beam.

(4) Wrap a come-along over the new beam and under the floor beam. Tighten it until the wood creaks or the floor moves slightly. If you have one come-along, put it roughly between the studs. If you can get two, put one near each stud. The purpose of the come-alongs is to pre-stress both beams so the floor won't suddenly drop when you remove the old vertical support studs.

(6) Use the come-alongs to adjust the floor position vertically if necessary. Fasten the bottom ends of the studs to the floor beam.

5
What are the proper materials and method to hang heavy-duty shelves in a garage for storage?
0
Connect Unistrut/Superstrut to the garage ceiling
1
How can I add joists to an existing trussed ceiling?
2
How can I determine if it's safe to remove this beam in my garage?
1
Garage door trolley no longer attached
7
How to best support garage storage suspended from slanted ceiling?
3
How to add ceiling joists to 20 foot wide garage?
0
Is it safe to build a long beam from shorter pieces of lumber?
2
Is this garage attic storage platform safe?
0
Can I remove these rafter ties? what else can go?