How to Make Freestanding Pegboard Walls?

I was just over at a place called "Value IT" which used to be called "Value City", and the owners were really creative; they dropped the "C" and the "Y: from the sign to rename the store without buying an entirely new sign. That's just the spirit of that place.

Anyway, aside from this store having wonderfully cheap second hand stuff, it also has walls; and not just any walls; Perforated Hardwood walls, everywhere, so that the landscape of the store can be modified to suite whoever and whatever a vendor may be selling there.

Me being a meta sort of a person, I can't help but wonder where I can get some of these Perforated Hardwood walls for my own place. It would be wonderful to see a mess somewhere, and then organize it on the wall! And if I ever had to move as my capitalist masters frequently dictate; it would be nice to be able to just pack up my wall, and move it to another location...or if as with the vendors at Value IT, my needs would change, I could just take the wall own and re-purpose it.

Now when I was rummaging around "Value IT" as I frequently do, I found an entire stack of the Perforated Hardwood, and it read on the label "Georgia Pacific Clutter Cutter"; which led me to figure out that it was called Perforated Hardwood or "Pegboard". But I was unable to find out what the stuff that fits inside these walls is called. I mean you can't just setup some peg board unless you have a garage with just some wooden rafters behind it to go with it; So in order to make the "walls" there are these vertical metal inserts that you screw the Perforated Hardwood into on both sides in order to form a wall. I suppose it also requires that you have at least two walls facing a 90 degree angle, which makes it seem to me like there are probably at least two kinds of inserts. Anyway the metal inserts for inside the walls were there too, but I couldn't find a label on any of them to find out what they were called.

Does anybody know what those metal inserts inside the walls are called? If they indeed come in more than one variety, let me know that too; Or if they go by one more aliases, just as the pegboard / Perferated Hardwood does. They look pretty cheap and flimsy, but if they do the job, I'm fine with it. 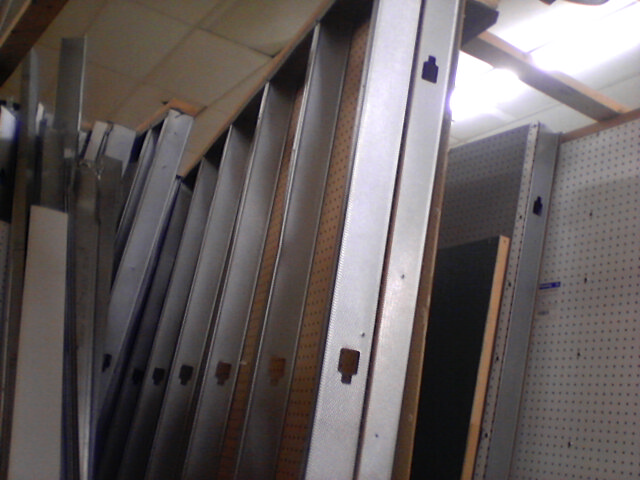 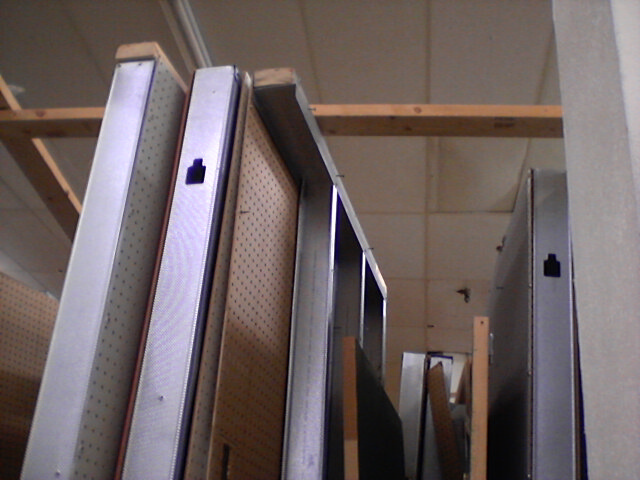 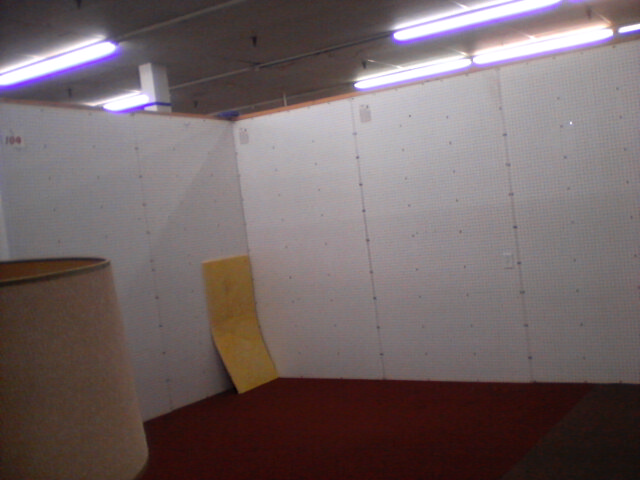 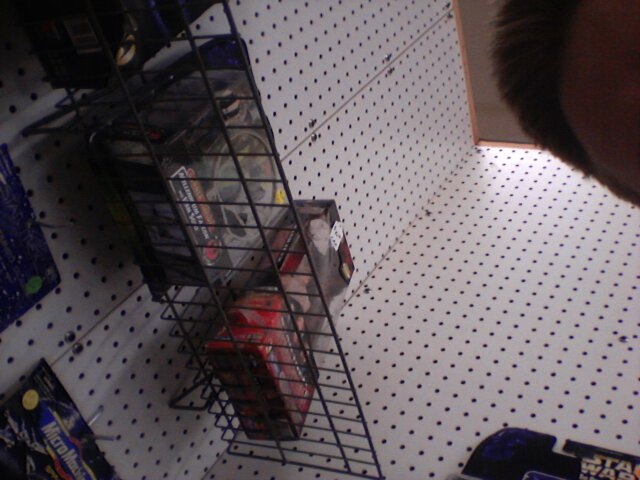 The metal things in the walls are metal studs, used in place of wooden studs. In other words, these walls are built like any other interior wall, facing material over framing, with appropriate attention to possible fire hazards and so on.

Pegboard is perforated hard board, not hardwood.

Normally you would mount the pegboard either directly to studs, like in a garage, or on top of 1x2 furring strips attached to the studs. If you wanted to get fancy, you could build a frame around it. There are also metal pegboards.

Holy cow just Google peg board hangers like this, and wou will Find lots of options. If it is not a pegboard we will need a photo. A free standing wall is not difficult to build with pegboard on both sides and feet to support. If the peg board is only on 1 side the support legs will need to extend further to prevent it from falling over.

The metal pieces holding up the pegboard are simple metal studs. You can find them at any big box hardware store.

As a more approachable alternative, rather than using metal studs, you can use wood studs to frame or float walls and attach the pegboard to those. There are many, many tutorials online that describe different ways to frame a floating wall so I won't post that here. Every situation is different.

If you attach pegboard directly to a finished wall, make sure you use furring strips (just thin pieces of wood) to space the pegboard away from the wall so the metal hangars have space behind them to hang properly.

I've never heard the term "perforated hardwood" used when referring to this pegboard material--for one thing it's certainly not made from hardwood but rather high density fiberboard.

Home Depot has the white-laminated pegboard and Lowes carries the raw-brown colored pegboard.

Not the answer you're looking for? Browse other questions tagged walls pegboard or ask your own question.

7
How do I hang shelves on poor quality brick/concrete walls?
3
How can I accurately measure the angle of my walls?
1
Installing wall shelves- Crumbling walls
0
Can't drill into exterior walls for screw anchors. Why not?
1
using 1x6 for framing exterior walls
1
Can these wall braces be removed?
3
Which is the right screws to use to mount ikea pegboard to studs for heavy weights with noob skills?
2
Can I safely hang pegboard between studs, rather than across them?
2
What are the green spots on our kitchen walls
0
Can I remove these walls?