Voltage increase when connecting a large load to household circuit

So in the place I'm currently staying, they use an inline hot water heater1. This is a ~5500W, 50A beast2 that replaces the shower head and heats up the water as it comes out. Notably, even 5500W isn't enough to really get the water hot if the flow rate is high, but it's certainly better than nothing.

I noticed that when I turn the water on, the bulb in the bathroom gets brighter. That's the opposite of what I would have normally expected. I whipped out the multimeter, and sure enough when the shower isn't running, I am reading 92V-95V3, but as soon as I turn it on and the shower starts drawing ~30A, the voltage increases to about 107V, which explains the brighter bulbs.

I'm used to a heavy load like a 30A4 either dropping the voltage, on a system with long insufficiently thick wiring runs (or a weak voltage source, like a generator or inverter near its maximum load), or holding steady (a well designed system) - but what could cause a load to significantly increase the system voltage?

Notes: I wasn't able to measure the voltage at the shower head itself - I measure it at an outlet elsewhere in the house. You can't see it in the picture, but the ground wire which comes out of the back of the shower head is simply pigtailed to neutral, which is why you only see two wires coming out of the head - unsafe as hell, but could this also have an effect, e.g., by providing a second return path for current? 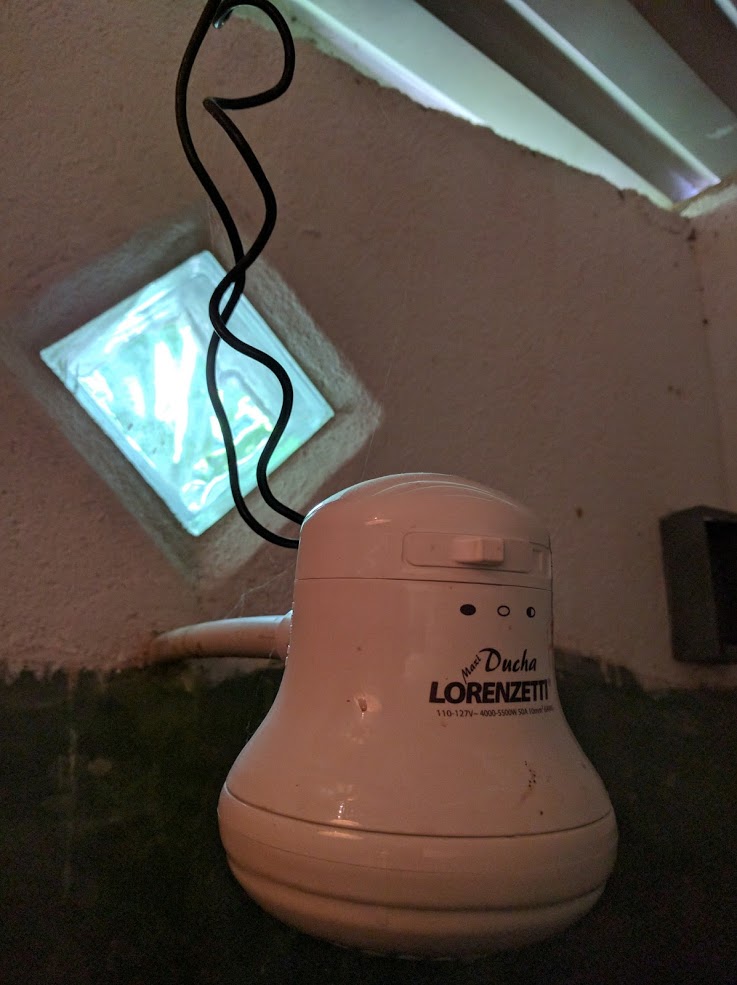 1Admittedly, I'm just making this name up - I'm sure the correct term is lurking out there somewhere.

2I've never seen these in Canada, the US or Western Europe, so I'm kind of guessing they are against code. Having live mains voltage in your shower doesn't seem like a great idea, and many that I've seen have bare copper exposed on the hot wire, so you are just a couple inches away from a bad accident when you reach up to adjust it. That said, they are very common at least across Mexico and Guatemala, where plumbing is either absent or cold only. Dual hot/cold plumbing is very rare.

3Yeah, it's out of spec, but this is rural Guatemala we are talking about.

4It's on full, so it should be trying to draw 50A, not 30A, but it's probably experiencing a lot of voltage drop on the long wiring run to the shower head.

This seems like the neutral cable in a split 120-N-120 service is not handling the full current. A small gain in brightness of a lamp on one side of the circuit, when a 30 or 50 A load is applied to the other side, is not unusual, but measure the voltage if it's more than a barely-noticeable increase in brightness. The maximum voltage should be no more than ~127 V.

In the extreme case of a neutral wire breaking (which happened to my service after a tree fell on the entrance cable), the voltage across each half of the circuit becomes 240V split by the resistance for the circuit. E.G. with a 40 A designed load (3 ohms) on one side, and a 1 A designed load (just a 120 W lamp, 120 ohms) on the other side, the actual voltage across the lamp would be ~234 V, and the 40 A water heater would get only ~6V. The lamp would be very bright for a very short while. (In my case, I was lucky -- a few lamp ballasts burned out, but over-voltage protection varistors on outlets blew circuit breakers before a fire started).

If I would have done the math 5500/120 = 45.8 amps. To verify it is a load imbalance causing the problem an amp clamp meter will be needed. You may be able to move breakers around to balance the load on the service. With one leg heavily loaded and the other not loaded an increase in the voltage on the unloaded side is not unusual. Code requires balanced loads but gives no specific percentage that is allowable. This may be almost impossible to fully balance but moving more of the 120v loads that may be in use while the water heater is running will reduce the imbalance and reduce the voltage swing you are observing. I would only try to reduce the imbalance because after the water heater is turned off the imbalance will be on the other leg.

Not the answer you're looking for? Browse other questions tagged electrical wiring shower grounding hot-water or ask your own question.

26
Should all Federal Pacific panels be replaced?

4
What could cause water to come out of the faucet when the shower is on?
1
What factors need to be considered to get the most powerful shower possible?
0
Is there an electric tankless water heater that takes multiple electric lines as input?
2
120 V between Ground and Neutral?
0
Why is water profusely coming out of my shower head when the water is boiling in my water heater?
2
Shower in another room leaks when bath is running
36
Why is my voltage dropping with load and why is current flowing on my ground wire?
0
Newly installed thermostatic mixer runs cold when shower head raised in height
2
Why does one of my showers consume all the hot water?