One thing that is concerning is the current drawn by these. It says each 5m LED strip consumes 6amps (2amps per color) so in total 18amps.

Does that mean i can't connect these strips to a 14-2 gauge wire which has a max 15amps rating. I also have other LED lights hooked on the same wire.

It depends an awful lot what you are using the 14/2 wire for.

For 120VAC, and you want to feed all 3 power supplies 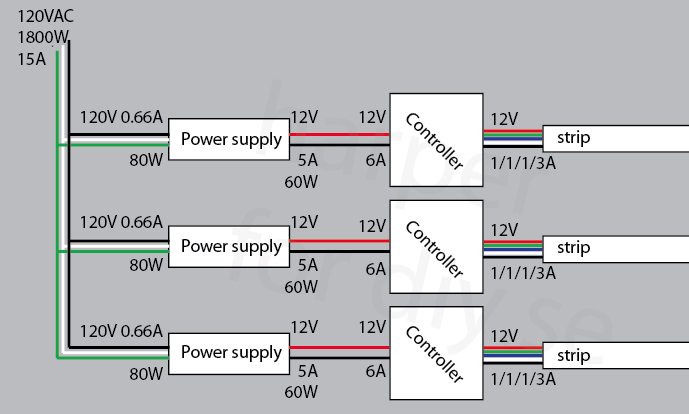 All the DC wiring here can be 18 AWG except for the 120VAC wiring on the left, which must be 14AWG. You see why I don't like those power supplies?

However having worked with LED strips a lot, you are not going to be happy with the final result. You will have 3 separate installations of LED strip that will operate totally independently from each other and respond separately to commands from the remote. Not every controller will see every signal from the remote, so you'll never get the colors or brightness to match each other, assuming all 3 remotes are even compatible with each other (and not serialized). If you are rolling/cycling colors, the three strips will be out of sync. Try it for yourself, but I think it will find it frustrating, amateurish and dreadful, and you'll either rip it out in frustration, or look for a better way to do it.

For 12VDC to the strip lights

There are several ways to make an installation of this size work well. One is to power them all from a single larger DC supply, and have all that go through dimmers/amplifiers. Here on out I assume you have a larger 12VDC supply of your own.

The "standard" in LED strips is generally:

Of course there are modifications on that. Double density or half density; 24V; coolwhite-warmwhite-yellow, just to name a few.

Your example seems to be a peculiar one. It's 5050, but they seem to be alternating RGB with WWW. They claim that the WWW can be controlled separately from the RGB (you would hope!) but that means they are doing something weird in terms of how the strip is wired. It is not 3 channels, it looks like 4.

But since half the total lights are on the "white" chanel, half the 6A power is on that channel, or 3A per strip. The three RGB channels split what remains, 1A each.

Power all three strips from one supply

Three strips together would be 9A on the white, 3A on each R/G/B color, or 18A for any feeder wire that is handling all the power for all of them. Also, 18A on the return ('neutral') wire. 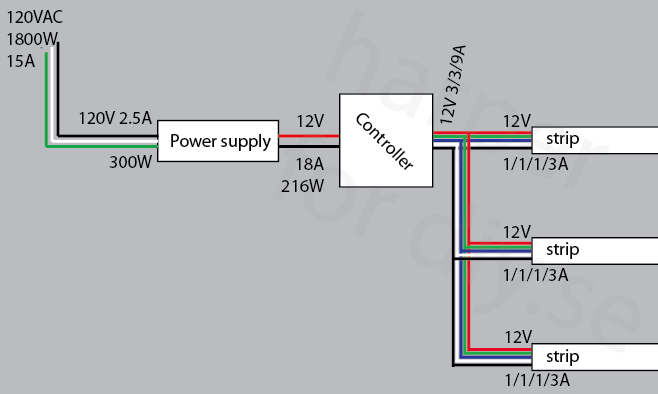 The 120VAC wire must be 14AWG. The feed between power supply and controller must be 12AWG (14AWG would not suffice - I believe that was your original question.) If any distance is involved, go10 AWG and you'll want stranded wire so it's more flexible. The return back from the strip must also be 12AWG and the "white" wire must be 16 AWG or larger. Color wires can be 18AWG or larger.

Since you're working in DC power, there is no requirement to have the "return" wire run in the same cable as the "supply" wires. So you could use 14/4 for the supply to all 4 colors, then run a single-strand 12AWG wire for the return. Or 12/2 for the white and return, and 18AWG thermostat wire for the rest. Since it's low voltage DC you are not obliged to use white/blue for neutral and green for ground.

Another option is do a separate "homerun" for each 5-metre strip, so the return would be only 6 amps, which would permit you to use 18AWG intercom wire of however many strands you need.

You could power each strip separately, and control them centrally using amplifiers. To do this, assemble each LED strip in the normal way, but use an amplifier where the controller would go. Then use one controller, and split its R G B W and common wires to each of the amplifiers. This means all three strings will be the same color, do the same patterns, etc. You will end up with 2 spare controllers, but you will have to buy 3 amplifiers. 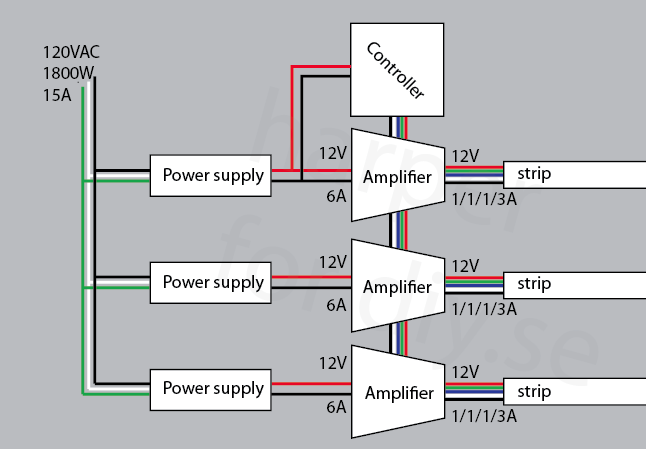 All the wire can be 18 AWG here except for the 120VAC wiring which must be 14AWG. The wires to the controller draw very low current, but wire thinner than 18AWG isn't any cheaper.

(it's possible to hook up one string normally and use amplifiers only with the other two. I don't recommend that, it'll be hard to troubleshoot, and the strings will not be equal.)

It says it uses 12W/m @ 12VDC or 5A of current for the 5m roll. That means at 120VAC you 'll be pulling 0.5A of current per roll (not the 2A Joe said because he swapped the numerator and denominator). So your total draw for 3 rolls is 1.5A. This is of course ignoring any losses, spikes, etc.

Not the answer you're looking for? Browse other questions tagged electrical led wire or ask your own question.

6
What's the suggested standard gauge wire for a given current?
1
How do I wire LED lights directly from the panel?
3
What gauge wire for long run from power supply to LED light strip?
1
How to attach 10 AWG wire to LED strip lights?
0
Wiring hanging pool table light into outlet plug?
1
What wire do I need to power 10m of SK9822 LED strip
2
How do you connect a long string of LED strips to power at both ends when including a controller?