I used a drain cleaner containing sodium hydroxide (NaOH) to unclog it. I followed the drain cleaner's instructions to the letter:

As soon as I started pouring hot water, it started pooling. No water would pass through. The sink was completely clogged now, because the NaOH formed a solid "bathtub plug" inside the pipe! (I could see solid white NaOH)

Pouring more water had no effect, so I carefully threw citric acid grains (a weak acid, contained in lemons), hoping the acid would react with the base (NaOH). Initially, the acid reacted with the NaOH (I could see bubbles coming out), but then it stopped completely.

WARNING: Acid and NaOH reactions can be very violent. In my case there was enough water to act as a heat-sink preventing boiling and splashing, and I was adding acid slowly. I can't emphasize enough how dangerous NaOH is. Use full face protection and gloves, otherwise you could go blind or get severe skin burns.

I don't want to open the pipes (if flow is restored it could splash NaOH solution on me).

Sidenote on why I did it:

My partially clogged kitchen sink would allow small amounts of water to pass through the pipe. I've been using a plunger when it was getting clogged (snake was ineffective).

A plumber had told me in the past, that the problem is deep inside the wall (about 3 meters into the pipe) and is very hard to fix. He also suggested using NaOH a couple of times a year to keep it clean.

Top view and side view respectively: 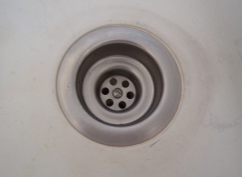 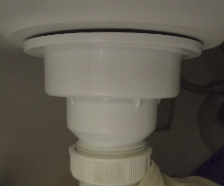 How to unclog it

!!! WARNING !!!
Put on gloves, and full face protection gear! NaOH can cause severe burns or even permanently blind you. You wouldn't want even a droplet on your eyes, since (unlike your skin) they have no protection at all.

(Before trying my method below, give a try to the other suggestion by @Jaroslav Voller. Try not to pierce the pipe if you use a screwdriver, though.)

Take 2-3 straws and insert each one into the holes. No I'm not joking. 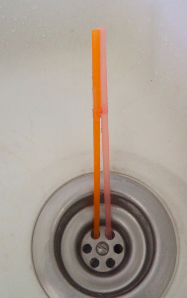 Then pour hot water through them using your tap. The hotter the water the more soluble NaOH and the salts you created, will be. Which will make the whole process faster. Just let the water run until it is unclogged.

Be careful with this water since it contains large amounts of NaOH and is corrosive.

This will remove the NaOH layer, but your initial problem will probably not be solved so you will have to try using the drain cleaner again, but this time use less NaOH.

The grid at the entrance of the pipe reduces water flow. My assumption is that the excessive amount of NaOH you used, along with the reduced water flow right after, caused the NaOH to boil instantly the small amount of water that was already present and formed the solid NaOH layer which you described.

Pouring water doesn't work because the water already present, along with the grid, reduces the flow above the NaOH layer, meaning it will dissolve very slowly or perhaps not at all. 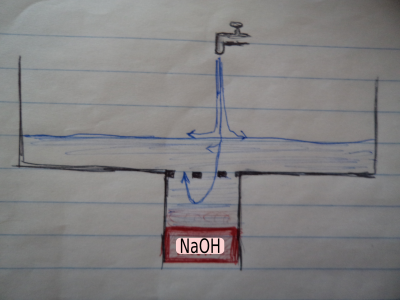 When you started throwing the citric acid, it dissolved in the water and reacted with the NaOH, increasing the temperature locally and also creating a sort of "salt", sodium citrate. 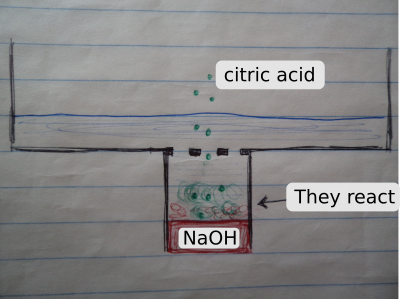 Initially it was soluble but as soon as it's concentration increased and the temperature dropped, it's solubility dropped as well, forming a layer of salt (blue color in the figure below), which actually separated your acid and base. This is why they stopped reacting. 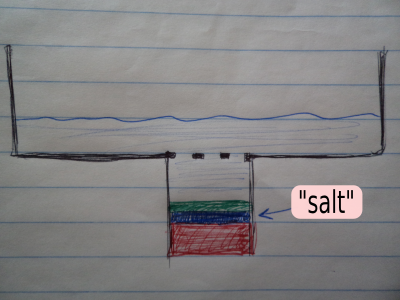 Using the straws to guide the water flow directly on those layers will do the trick. The layers will be dissolved within a few minutes. 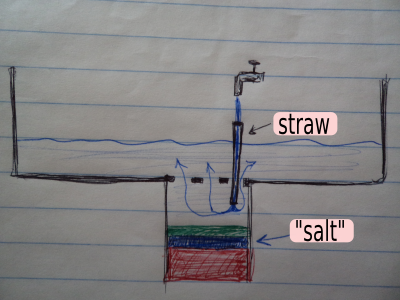 Note: Colors in the figures do not represent the actual colors of the substances used.

I just faced the same problem recently - a NaOH plug.

I solved it using citric acid. Instead of using straws, I used a piece of hard wire and I was hitting the hard NaOH clog mechanically. After each stroke, a reaction on NaOH and citric acid was apparent (boiling like effect, bubbles coming out of the sink).

After a couple of minutes, the clog had dissolved and the sink was completely cleared. I was a bit afraid of an intense exothermic reaction but the plastic did not melt.

I just cleared an extremely difficult NaOH blockage in my bathroom sink. Gallons of water went in, and I spent 20 minutes working at it with the straw. While I could see there was a reaction between the NaOH and the toilet descaler I was using it wasn't enough.

Then I had an idea that worked in 60 seconds! I got the steam generator I use for general cleaning and put the nozzle right on the end of the straw (It was a heavy Ikea reusable straw) and injected the steam direct down the straw onto the blockage.

At first there was rumbling noises then in about a minute or so a satisfying gurgle and the sink completely drained. It's good as new and I think that drain has never been cleaner.

Naturally you want your face, torso, hands, arms etc protected but it worked really well, so I guess heat really is your friend for getting through that salt layer.

I had this same problem. I tried to de-clog my shower drain by pouring several capfuls of caustic soda (NaOH) down the drain. I was going to leave it for 30min and then flush it, but I forgot about it and accidentally left it overnight. The next morning the NaOH has formed a solid white plug at the top of the drain. I tried to jab through it with a hammer and kitchen knife, but no luck.

Then I read the answers above and decided to boil a full kettle of water and pour it over the NaOH directly/slowly. After about 20 seconds the NaOH started to dissolve and bubble and then it completely drained away and the pipe is fully clear now.

So just carefully, slowly pour boiling water onto it... problem solved for me!

I had this happen to me the other day. Luckily it clogged right at the top of the pipe, and i used one of my flexible 1/8" spade bit to drill a hole through it. With the hole there the LYE clog dissolved in a few seconds running hot water. It still didn't fix the original clog, so down to the crawl space I go!

LIVVIDLIVVID
1
Add a comment  |
Highly active question. Earn 10 reputation (not counting the association bonus) in order to answer this question. The reputation requirement helps protect this question from spam and non-answer activity.

Not the answer you're looking for? Browse other questions tagged drain clog or ask your own question.

5
Could a frozen dishwasher line have ruined something?
0
My dishwasher keeps jamming, it's not draining water, has sitting water in the bottom
0
How to clear outbound blockage using the snake/auger?
1
Is it prudent to unclog kitchen sink with boiling water?
3
Should a bathroom sink drain outlet flow away from the trap, or back toward it?
1
Drainage pipe to nowhere
1
How to fix when water is not sinking from bathroom and balcony?
1
Toilet does not flush, pressure is non-existant, it worked when first installed, what's up?
1
Pulled a lot of stuff from Bath tub drain, now the clog is even worse!