How do I connect two insteon switches to this wire box?

Here is a picture of my wire box that I made. I'm guessing the right is source and the two to the left are the light and the outlet that is controlled by the switch. I have two insteon switches that have a red, black, white and green/ground wire.

When I opened it up, there seemed to be a lot of extra connections/wires, so I removed two of the connections/wires. I didn't take a picture, and I don't remember how it was configured! The middle neutral wasn't used, the two blacks on the right were together, one red and one black were connected, etc. Now I just want to get to a point where I can use my switches and not have something catch on fire! 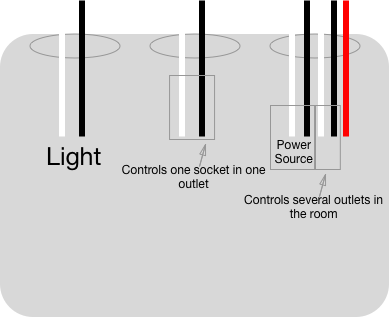 It could be worse

Copper thieves could have taken a bunch of wires, leaving you no idea how things were ever hooked up.

So you have to get your multimeter and start testing stuff, and some of this must be done hot. Figure out which wires are your power supply. Figure out which breaker it is on. Bonus points if you slap a GFCI breaker there to keep you honest. Make sure it doesn't trip before you start.

Then you have to move through each group of wires and figure out what they do. I wouldn't throw power on any lines until I have made sure they are not a switch, by checking for resistance with switch(es) in all positions.

Hook up the grounds first, in any case.

Having a few incandescent bulbs and dollar store night lights helps a lot.

One of my most useful tools for that is an appliance cord and two wire nuts. If you have a pair that reads infinity ohms until you plug in a nightlight or install a lamp bulb, splice their hot and neutral into the cord, plug in to a supply (fed off another circuit of course) and see what else lights up.

Work through it, labeling or diagraming as you go.

It really helps if you know how to do electrical wiring. If you don't, you won't know what you're looking at. For instance, that 3-wire bundle black/white/red probably has something else going on.

1
How do I wire my light fixture?
0
How do I update two 2-wire switches housed in a single box? Both switches are combination switch and PILOT light
3
How should I connect a fixture to this outlet?
2
How do I install an insteon light switch where wire colors don't match?
1
Replacing switches with connecting wire
2
Replacing three way switches with insteon
0
How do I wire one outlet and two separate light switches in a three-gang box?
0
Turning two-way switches into three-way
1
Odd behaviour when adding two smart dimmers in one box